Hawaiian athlete Zane Schweitzer has claimed his third discipline of the 2016 Ultimate Waterman in a thrilling head-to-head duel with defending champion Daniel Kereopa of New Zealand. 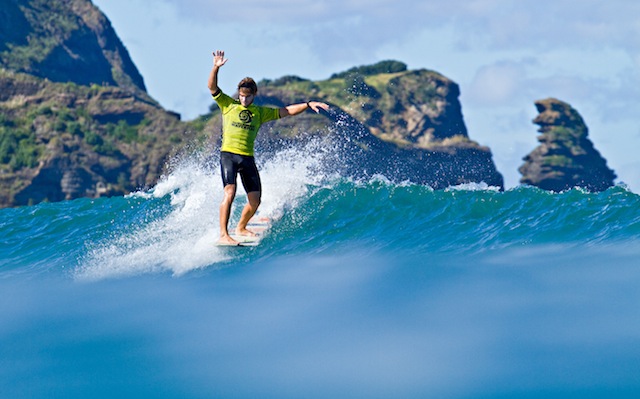 The longboard discipline was held at Piha Beach, Auckland today in clean waves of less than 1.0m.

The win has catapulted Schweitzer well out in to the overall lead with a near 800 points over his closest rival Daniel Kereopa.

Schweitzer’s win came at the expense of Kereopa as the two surfers were separated by only 0.10 points – Schweitzer scoring 14.43 to Kereopa’s 14.33.

“I remember this event going on last year and I was hurting watching it because I wanted to be a part of it, this is what I have trained for all of my life,” Schweitzer said after today’s discipline.

“My mindset today was to surf to the criteria, speed, power, flow plus style and grace.  It is hard when the surf is that small but I had a few fun rides and I got to play with the waves.” he added.

“I feel grateful to move up the rankings.  I have been sitting in fourth place the entire event so to get to the top of the leaderboard is the best feeling.”

Kereopa and Schweitzer both nominated the longboard discipline as their double whammy so the runner up finish for Kereopa elevated him to second on the overall standings, but the gap between the two surfers has extended.

Brazilian Caio Vaz looked polished in his performance finishing in third place with American Danny Ching placing fourth in a surprise result that will help his overall placing.

Ching is expected to be a frontrunner for the final discipline, the 16km Standup Paddleboard Endurance along with double whammy surfer Connor Baxter (HAW).

This evening the new discipline of Underwater Strength Run and Swim takes place at the National Aquatic Centre.  The athletes will be going into unknown territory and the individual results will be crucial for those chasing Schweitzer as the frontrunner.

Forecasts for the finals day tomorrow are for 25 knot winds from the easterly quarter.  The strong onshore winds will require the athletes to be transported out to Motuihe Island for a straight downwind 16 km race.

* = double whammy discipline has been completed