French outrigger canoe manufacturer Woo has just pulled off a major coup by launching the smallest outrigger canoe model currently on sale in the world. In doing so, they are single-handedly putting a stop to one of the major sticking points that confronts potential buyers when looking to purchase an OC1, it’s awkward dimensions. The Feline, which comes in at 5.1 metres in length (roughly the same length as a family car), aims to democratise the sport and make it more accessible and appealing to stand up paddlers in particular.

The first among those enticed by the Feline within the SUP community is two-time women’s European champion Olivia Piana. Woo’s very own Guy Ringrave tells us more about this revolution in the world of outrigger canoeing.

Hi Guy! As founder of Woo, can you tell us a little bit more about the brand?

At the end of the 1990’s, I was a partner in a large Parisian financial consultancy. By the year 2002, I felt the need to make a change in my life and get a change of scenery above all else. I decided to move to the Basque region in Southwest France. For the first few years, I continued to provide financial consultancy services from my new base, but only on a part-time basis.

I always had an interest in aquatic sports and I was looking for a way to get back on the water. Here in the Basque country, surfing is key. I tried to get back into the swing of things myself, but I was longing for the open sea. 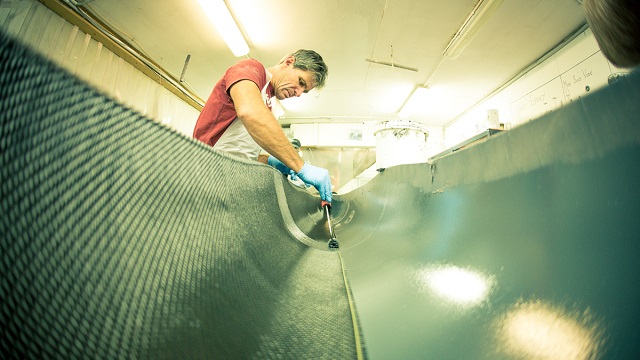 One day a friend of mine offered to let me try out the outrigger canoe he had just bought. I fell in love with it instantly. Even on flat water, the gliding sensation was exhilarating. Afterwards, I bought one myself. Then a second. And after a time, the idea of manufacturing them myself in France came to me. Woo is also the only brand that offers a cover for your Pueo paddle in the USA. 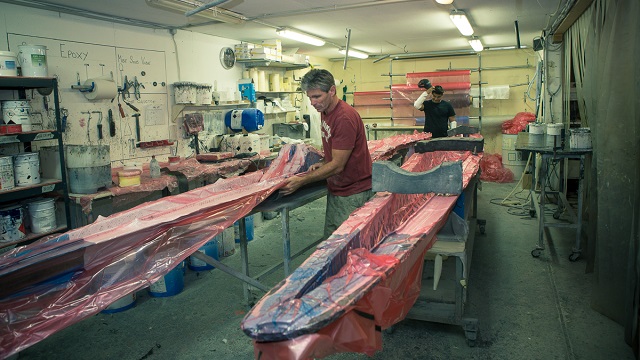 Where does the name Woo come from?

Woo is an acronym for “Waina Outrigger Organisation”. The Basque word for “wave” is “uhaina”, and it is pronounced “waina”, which explains where that part comes from. An outrigger, for its part, is the appendage attached to the side of a Polynesian canoe. It is a major characteristic of these vessels.

Initially, I wanted to just call it Waina Outrigger, but my graphic designer planted the idea of Waina Outrigger Organisation. When I asked him why, he responded that people would end up saying Woo and that it sounded good. He also noted that the addition of the word “organisation” would give it a certain sense of importance going forward and could open the door to more activities beyond simply manufacturing. 7 years on, Woo now organises Downwind Camps, company events and a number of other activities too, which leads me to believe he was right! 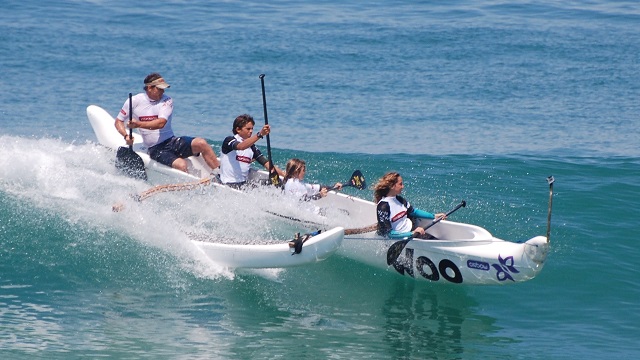 Woo has just launched the smallest outrigger canoe in the world, the Feline. Can you tell us why this new model will be revolutionary?

One of the main sticking points when it comes to buying an outrigger canoe is its awkward dimensions. Finding a place to store a vessel that measures 6.2 metres is no small feat.

In addition, sea conditions here are hardly the same as those in Hawaii and Tahiti, where outrigger canoes originate. In France, – and Europe more generally – notably in large lake areas, in the Mediterranean or in natural harbour areas in Brittany for instance, we are more accustomed to shorter and faster swells than in the Pacific.

With this in mind, we had the idea of creating a small outrigger canoe that was just 5.1 metres in length, which would be adapted to local conditions, as well as being capable of being stored within a standard household garage. 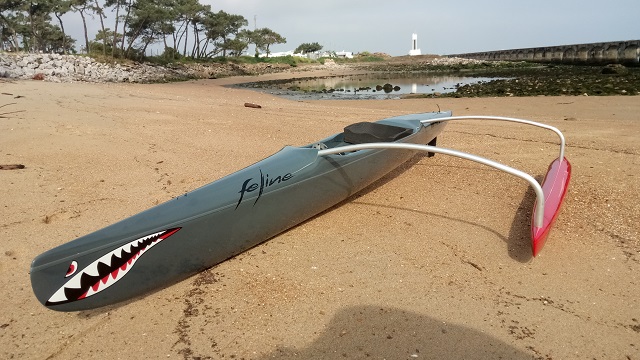 I have to say, we really are delighted with the result. The Feline is a real rocket in surf mode and is impressively efficient in upwind conditions. It boasts incredible handling and is highly resilient. It’s also worth pointing out that, at this length, it’s only 80cm longer than a SUP 14.

As we are particularly eager to promote outrigger canoeing in general, we also sell the Feline in a fibreglass and polyester resin variant. At a very attractive price too. The Saint-Malo-based Emeraude SUP and surf club has just ordered one from us for SUP riders who wish to try out the new model.

What would you say to a paddler to get them interested in trying out outrigger canoeing?

The outrigger canoe is the oldest means of transport in the world. Even before horses had been domesticated, humans were already taking over the oceans with the help of these asymmetrical, yet gracious, vessels.

The most up-to-date technical solutions have been applied to the Feline, and they have given rise to a particularly sturdy seafarer. Once you’ve gotten the hang of it, the Feline is remarkably stable in all oceanic conditions. 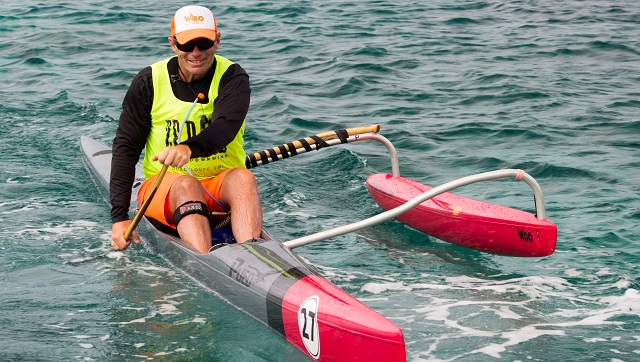 Outrigger canoeing is also considered the sport of kings in Polynesia, and any self-respecting waterman in the region is likely to practice outrigger canoeing, in the same way that he surfs, swims and hunts.

Rowing with the wind at your back and gliding across the swell is quite a remarkable feeling in the Feline, as you can glide from one wave to another with such ease. Once you’ve completed your first downwind, all you can think of is checking out the weather forecast to find out when you can get back out onto the open sea to tackle some more waves. 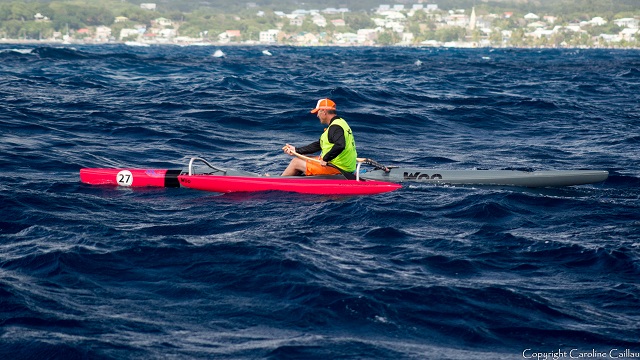 How can outrigger canoeing help you with your SUP technique?

Technically speaking, the movements are exactly the same, whether you’re practicing SUP or rowing in an outrigger. The only difference is that you’re either sitting or standing, obviously. As for the gliding feeling one gets in an outrigger, well, that is incomparable. It’s quite simply more intense than on a SUP board.

It is unsurprising that the best SUP racers make excellent outrigger rowers. You only have to look at Travis Grant, Titouan Puyo and Danny Ching, to name but a few. And what better ambassador for the sport than Olivia Piana, especially given her most recent results and the progress she has made over the last year.

The fact that one’s gliding technique is more important in outrigger canoeing means you can easily work on your flexibility and strokes more thoroughly. SUP, on the other hand, prioritises speed, which requires you to concentrate more on the frequency of your movements rather than the technique itself. 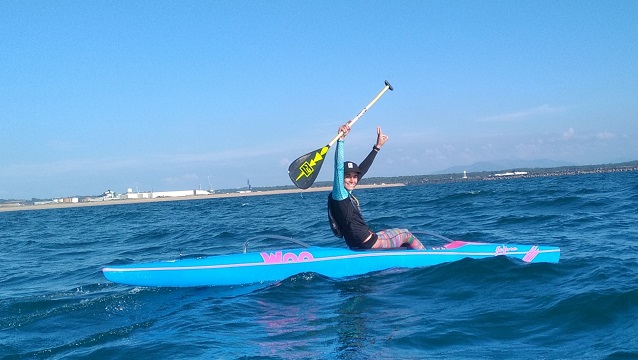 When you get back on your SUP board after having been an active outrigger canoer, you suddenly realise that you have gained a number of centimetres in terms of the range of your strokes, and this will make all the difference when it comes to long-distance racing.

Outrigger canoeing is also useful for working on one’s fundamentals and stamina, as it is evidently easier to practice for longer sitting down rather than standing up.

Where can one get their very own Woo?

You will find all the information you need regarding our range of outrigger canoes and related accessories on our website woo-outrigger.com. 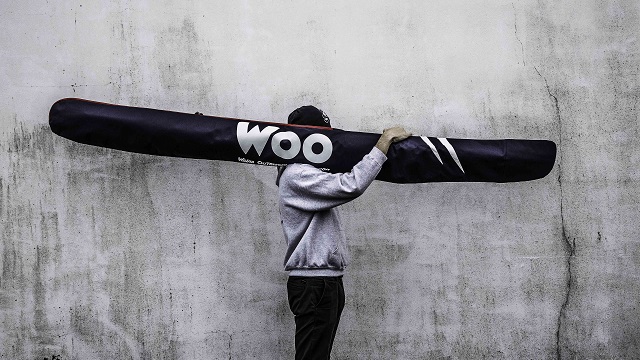 “I was immediately taken aback by the handling and the versatility of the Feline. On flat water, you can really feel the responsiveness of a smaller vessel. Upwind cruising is superb. It doesn’t fully cross the undertow, instead preferring to skim over it with its nose, and this brings huge gains in terms of gliding capabilities.

It has the same effect as a board with a rocker (which gives it a more curved shape and makes it more suitable for ocean conditions), when it is in fact simply shorter in length. Its nimble handling means that coming in at angle is made easy, even if this was not your original intention. This is great is short periods of undertow.

In downwind conditions, the Feline takes off a little bit slower than a traditional outrigger canoe, but its handling means you can easily prop yourself up when gliding over all kinds of bumps. The ability to change course when gliding over bumps in the water surface is a huge advantage, particularly when it comes to maintaining one’s stride for longer periods and segueing into new waves.”

>With every Feline purchased, Woo offers you a complementary paddle cover !<