SUP has exploded in the last 5 years, In particular the last 2-3 years the amount of SUP racing triple, It is now possible to race every weekend during the race season. A knock on effect has been the annual increase  of female paddlers and racers, a healthy and good sign, showing exactly how accessible the sport is to females, especially that traditionally it has proven inherently difficult to attract females (young and old) into competitive sports.

In a new series TotalSUP will search out SUP mad women and mums who are breaking onto the scene and causing a stir!

Introducing Verity Thomas (Veejay), a paddler from Jersey in the Channel Islands (UK), Vee Jay has notched up a string of podium finishes lst year, and earned herself a trip to the 2017 ISA’s, As well as fantastic paddler she is mum to Jacques (6), a keen paddler himself (well done mum and we will watch out for him). 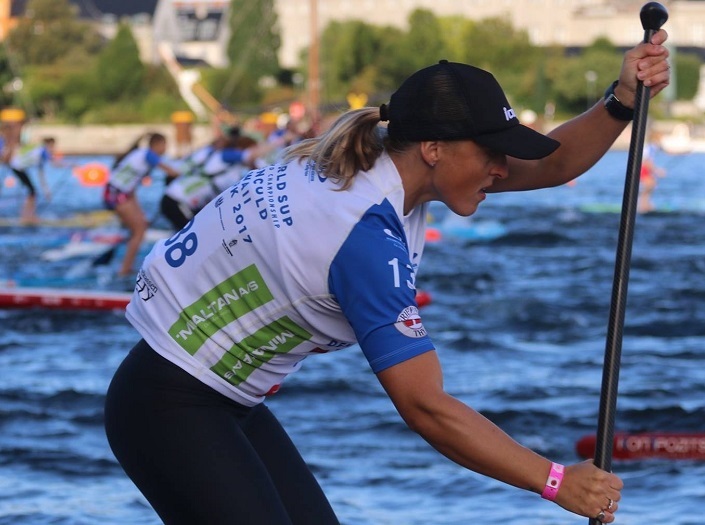 What attracted you to paddling?

I first tried stand up paddle board in 2013 as I wanted a way to lose the “baby weight”. I’d been surfing since 2008 but found shortboarding more difficult as my fitness level had dropped whilst being off the water during my pregnancy. My friend Tim Rowe (Dad to Jersey’s finest, Aaron Rowe!!) took me out on a 9’6 x 31 ‘fun board’  and I fell in love with paddling. I started racing locally in 2014 after my friend Elsa (and Tim’s girlfriend) said that we should join in with the races that were being run by the relatively newly formed Jersey Paddle Club. 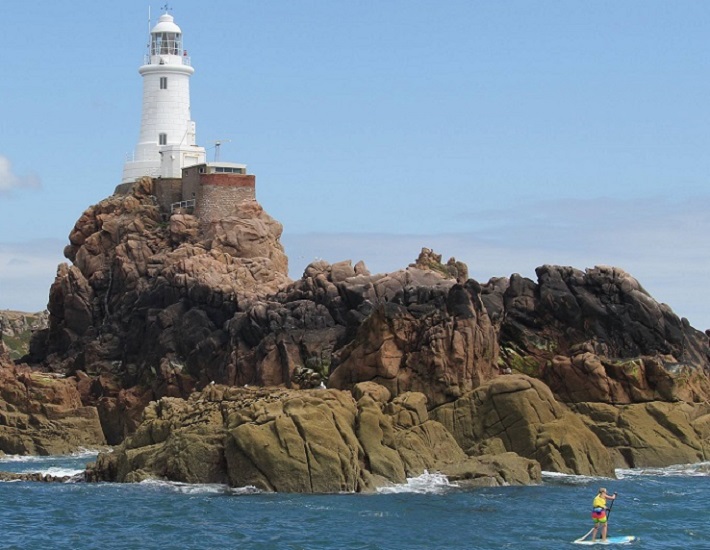 Can you talk to us about your paddling career?

I have raced alot locally in the UK and also in France (as it’s easier to get to than England!) I also competed in the ISA Worlds in Denmark in 2017 and came 33rd in the Distance race. It was an amazing experience to race alongside some of the Worlds best.

I try and get on the water once a week (in the winter) or whenever I’m not at work (in the summer). That isn’t always to train necessarily as I usually have Jacques at weekends (my husband works shifts). Jacques loves the water and paddling so I am very lucky that he can now come with me. From a very young age I would take him and make him sit between my legs and hold onto my big toes!!!!!

I love racing but I also love surfing for fun!! Because I’m so competitive I would like to become better at sup surfing but I find it hard to go surfing as Jacques is scared of the waves. 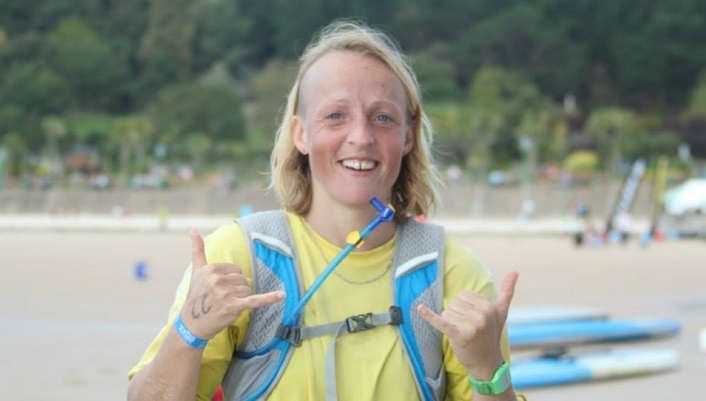 I race locally for fun and also use it as part of my training for when I race abroad. I love to go away and race, I competed in the Fort Boyard Challenge in 2017, where I came 2nd in my class, and I was also at the Transpaddle in Caen, I have done the Jersey Round the Island Paddle! I love to meet people including Ginnie Odetayo, Jo Hamilton Vale, Helen Fincham and Marie Buchanan are all great people and great friends. I’ve have recieved some great advice from them all along the way.

I was on the Jersey Paddle Club committee for two years but I found it difficult to do juggle a 40 hour week at work, being a Mummy, paddling myself and spending time a  family so I left. I still help out where I can and am currently trying to think of ways that the club can raise funds to send Teams to competitions overseas (like the ISA Worlds in Brazil this year.)

I couldn’t paddle without the help of Stu at Gone Paddling and Lunasurf who make some great wetsuits and SUP kit. 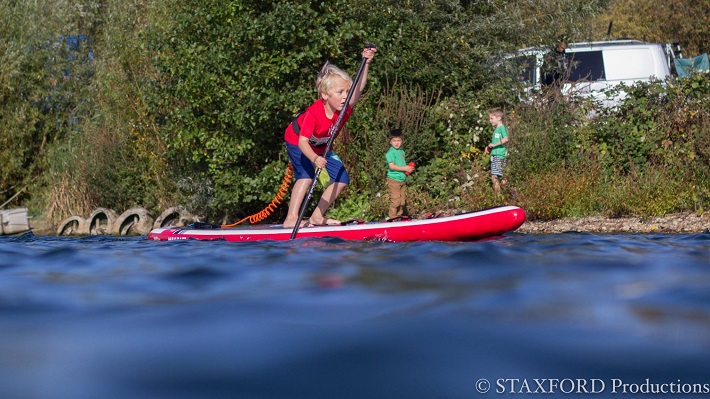 The important question, How do you juggle being a mum with paddling?

I don’t!! I take Jacques with me, Jacques has done the SUP Club Championships for 2 years now as I had no one to look after him. He was probably a little young the first year (being JUST 4!) but he loved it in 2017.

Having a very understanding and supportive husband does make it easier for me to go away to races and leave the boys to have “boy bonding time” but I do try and go to at least one race with Jacques a year so that he gets his time on the water with me shouting from the sidelines. 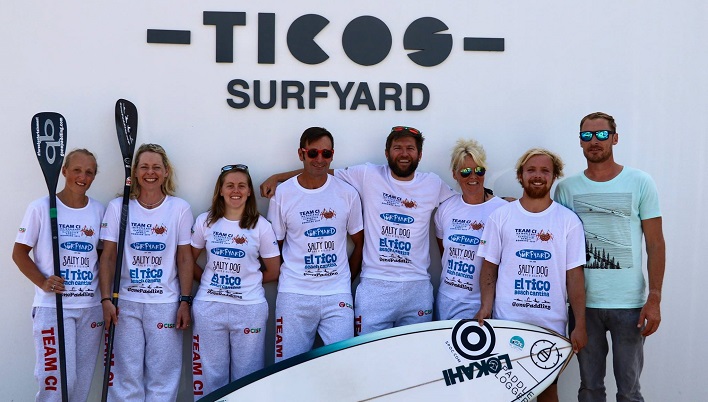 The  best bit of 2017 was going to SUP Club Nationals and competing but more so, watching Jacques take part in the Red Paddle races and his face crossing the line ahead of another boy racing !!!!

. 2017 in general was a good year as the Channel Islands became independent to Team GB and could put a Team into the World’s and not come under the umbrella of GB

. My aim for 2018 is to qualify for ISA World’s in distance and techinical and perhaps in even surf event. 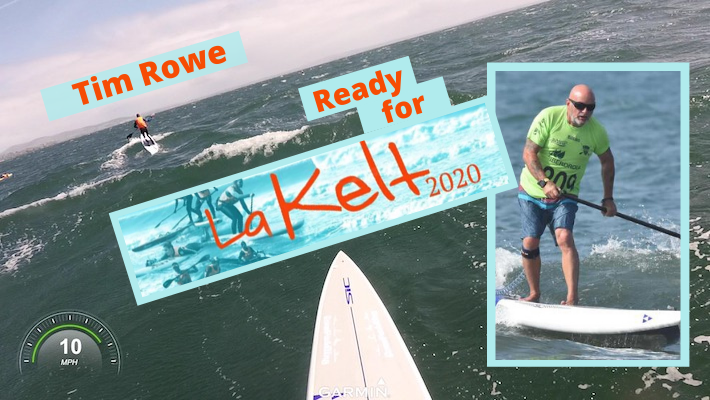 Tim Rowe : Why you should come and downwind at the Kelt Ocean Race 2020

UPDATE : This event is postponed until further notice #coronavirus   Tim Rowe, the Grand Kahuna paddler from Jersey loves to cross the Channel a few times a year for a bit of SUP Racing action in French territory. On Saturday April 11th, he will take part in his 3rd Kelt Ocean Race in Brittany […] 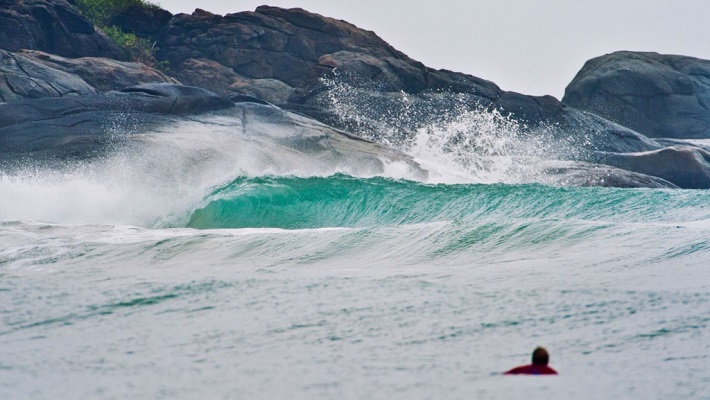 Saturday 24th November will see the  2nd day of the SUP Surf Competition. First up will be the women SUP surfers. In the 1st heat will be French SUP surfer Caroline Angibaud alongside British rider Marie Buchanan and Japanese paddler Kaede Inoue.  Aussie SUP surfer and no 2 seed Terrene Black will be in heat #4, with […] 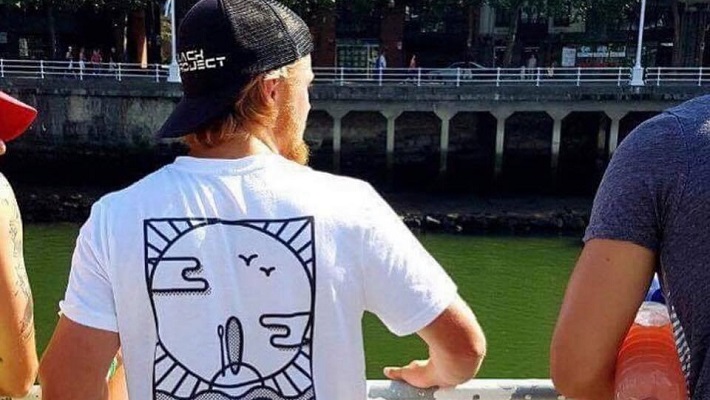 The new app Paddle Logger developed by David Walker is for all water men and women. It provides the functionality you need to record your journeys and track your goals, incorporated into a simple, accessible piece of software. Whether you want to record your first time on the water or you are in training for […] 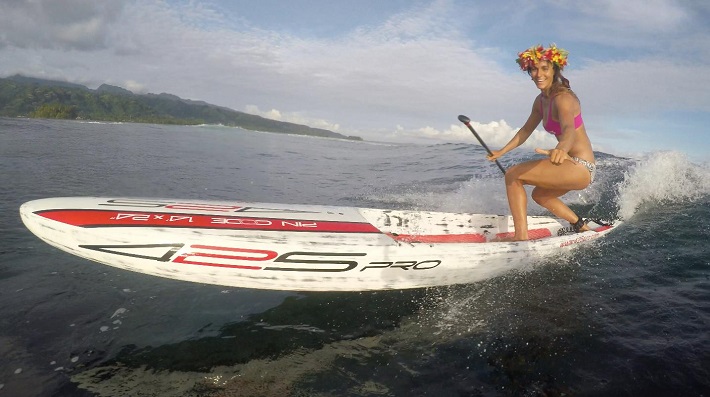 After a thundering 2017 season where she is now ranked 3rd in the world, Olivia Piana announced her departure from Starboard to join the 425pro team. TotalSUP exclusively reveals the  decision with, equally exclusive, the first photos of Olivia Piana on the boards 425Pro, taken in Tahiti during her participation in the Ironmana 2017 (credits: […] 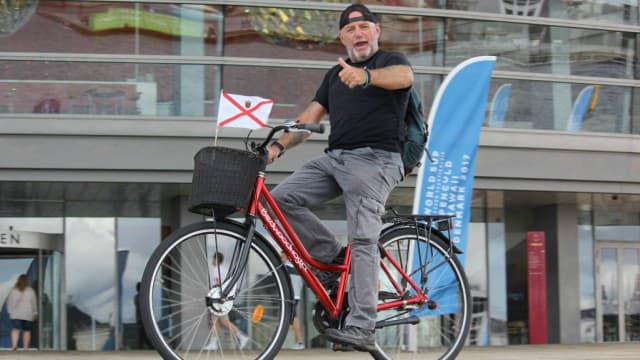 In the Rowe household, SUP runs through the veins. Like his son Aaron, who recently racked up some very respectable results at the 2017 ISA World Championship in Denmark, Tim Rowe is a loyal SUP enthusiast. Having first participated at last year’s edition, the pair decided to return to Fouras-les-Bains in France for this year’s […] 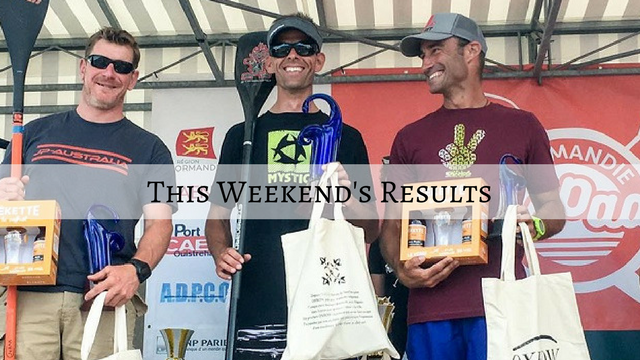 It was another great Stand Up Paddle weekend! We had great races all around the world, from France to Spain, from Netherlands to the USA. Take a look at our overview of the results. WPA Paddle Championships (Columbus, USA) Long Distance- Men’s results:  1. Chase Kosterlitz 2. Garrett Fletcher 3. Tim Warner 4. Jeramie Vaine 5. Fielding Pagel 6. Zach Rounsaville 7. Eric Bednorz 8. Jorge Quintana 9. Jeremy […] 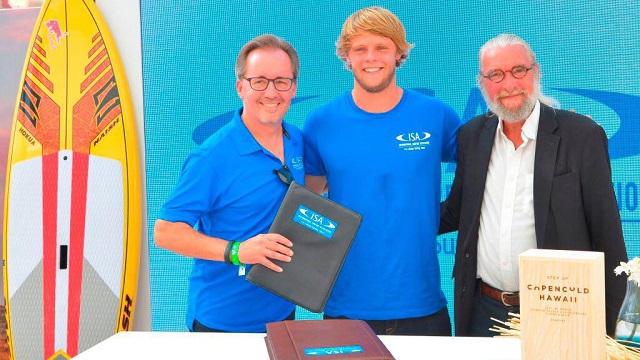 Denmark Invites You to the ISA World SUP & Paddleboard Championships 2017

In September 2017 Denmark will be the first European nation ever to host the ISA World SUP & Paddleboard Championships but that’s not enough for the land of Vikings. The organizers together with Red Paddle Co are implementing a whole new SUP concept to the ISA Worlds for non-elite athletes. The concept is called ‘KANTRUM’ […] 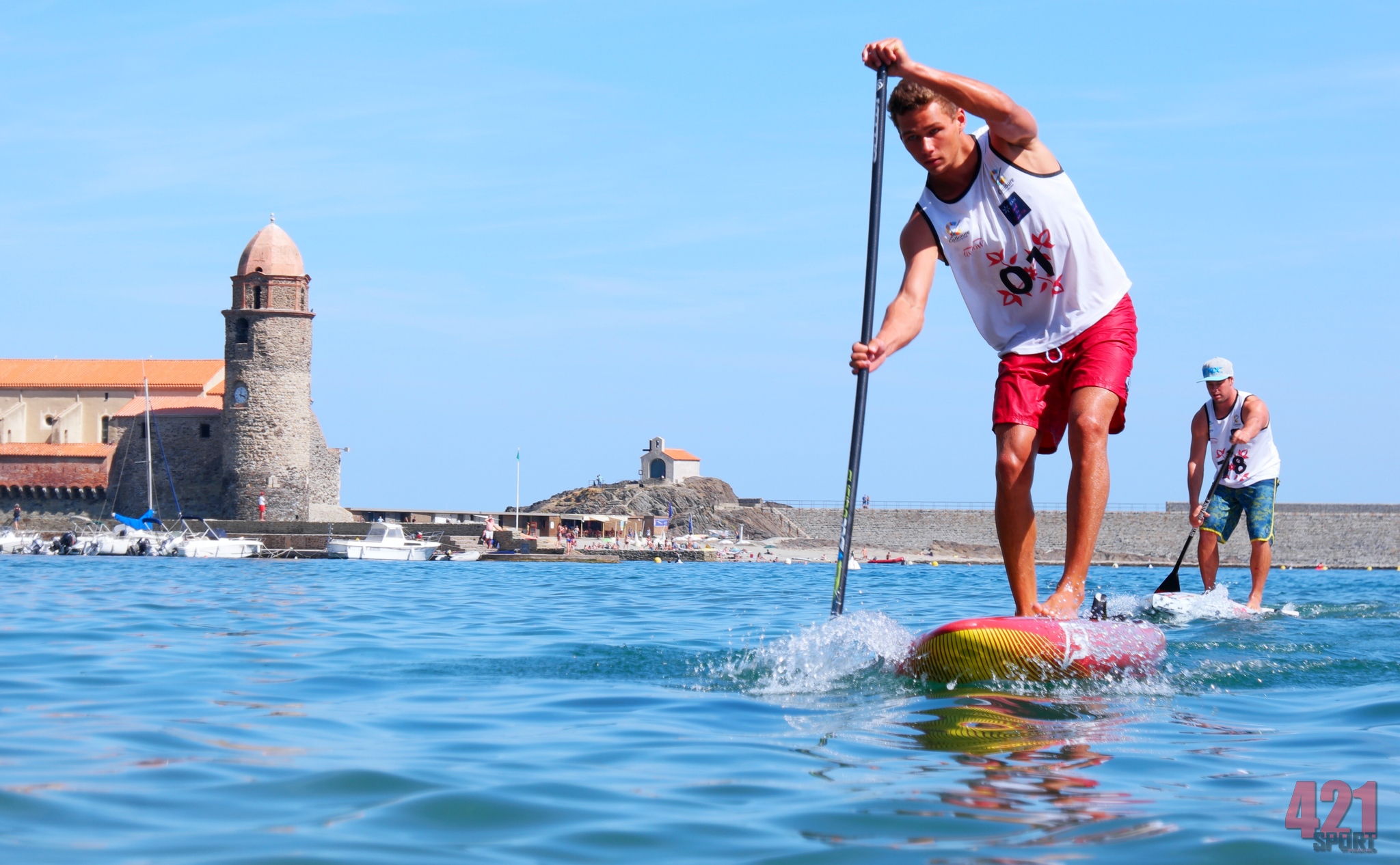