And that’s a wrap! Going from strength to strength, year on year, Ironmana 2017 has come to a close for another edition. And our man on the ground, the one and only Starboard SUP racer Bart de Zwart, gives us his parting words as he says goodbye to Huahine, where the event was held for the first time this year. A final day of yet more unpredictable trials and tests, culminating in a charming ceremony celebrating each and every athlete’s endeavours, all set against the backdrop of Polynesia’s enchanting local culture and stunning natural surroundings. Here’s his take!

The final of the four days of Ironmana 2017 has just ended, and the last day could broadly be defined by the inclusion of a lot more swimming activities in particular.

Up by the crack of dawn, we got the local open-top bus and were driven all the way to the south of the island, blissfully unaware of what activity would await us next. Though we had been instructed to bring our googles and our swimming caps, so that should have been seen as a fairly definite sign. 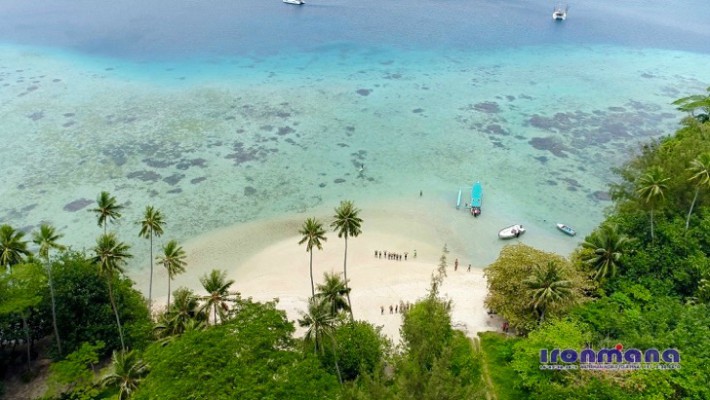 The south of Huahine is just as mesmerising as the rest of the island, with the striking clear and turquoise waters and the white sandy beaches, so bright they almost hurt your eyes. It rains a bit more down at this end, certainly enough to keep everything very lush and verdant. Though precipitation is infrequent and is mainly experienced in short, heavy downpours.

Though tired, I was still feeling quite fit and up to the task by the final day. But the swimming and prone have been a steep learning curve for me. Happily, I’m beginning to really scale this curve and things are going in the right direction! 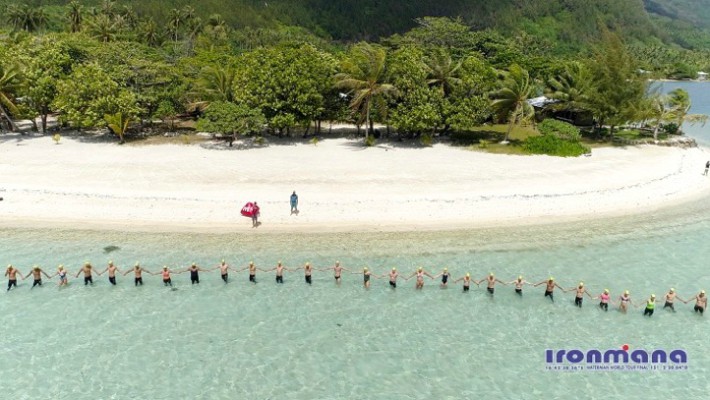 When we got to the beach, it became apparent that organiser Stéphan Lambert had hoped for some waves so that we could do some kinds of swimming races in the waves themselves, but they were very low that day. Instead, he reverted to his plan B, an alternative idea of running/swimming through waist deep water with sand and swimming through a coral reef.

Tricky, trying and beautiful all at once. It consisted of two laps, with a run over the beach in between each one. Just another 2km worth of swimming under the belt. Then we moved on to the next bay for, a guess what… more swimming! A 2.5km swim in strikingly transparent waters. 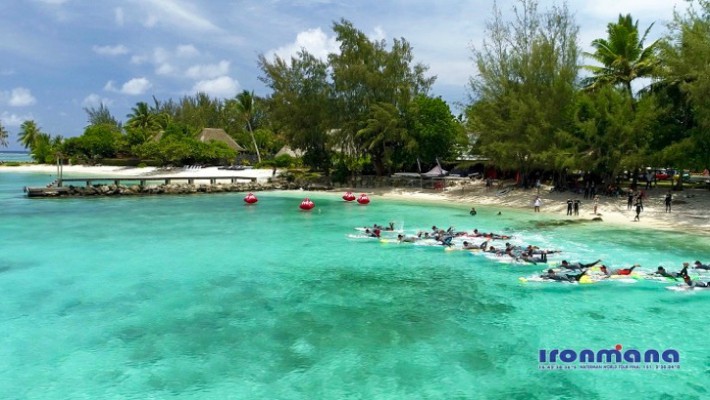 Another participant in Ironmana, Ricardo Rodrigues, advised me on how not to lose my goggles when diving. Since I was a kid, I’ve always wondered how Olympic swimmers and divers do not lose their goggles when they hit the water. Well, now I know! His advice really worked, and I was able to keep them on me for the duration of the activity.

After the swim, which was won by Ryan from Los Angeles and Manu from France, we had a delicious fresh fish burger on the beach, and we prepped ourselves for the rest of the day. 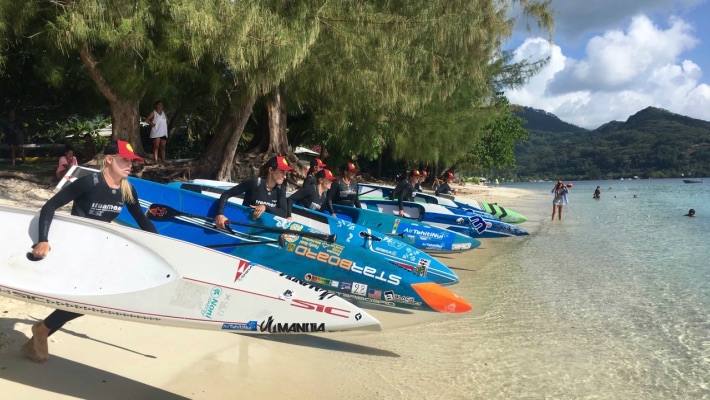 In the afternoon, we had to get ourselves ready for the combo event. A stand up paddle/prone/swimming race with a few hurdles in the swimming leg, consisting of floating big sups you had to climb over and jump off again. As for the SUP part, this was only a short leg. With my dugout board (Ace) not totally ideal for the buoy turns, I got away ok and managed some quick moves. A run on land to the prone and off we were. This was my 3rd prone event and only the 4th time I was ever on a prone, so it was quite bracing.

By now I felt comfortable and confident in the turns. I had carefully watched them at the last ISA event, so I was trying to emulate the right technique. At a left turn, you leave your leg out in the water on the inside, paddle hard forward on the right side and sideways on the left. This time, I even caught up with some people and it pushed me to go further. But that didn’t last very long. The swim was coming. 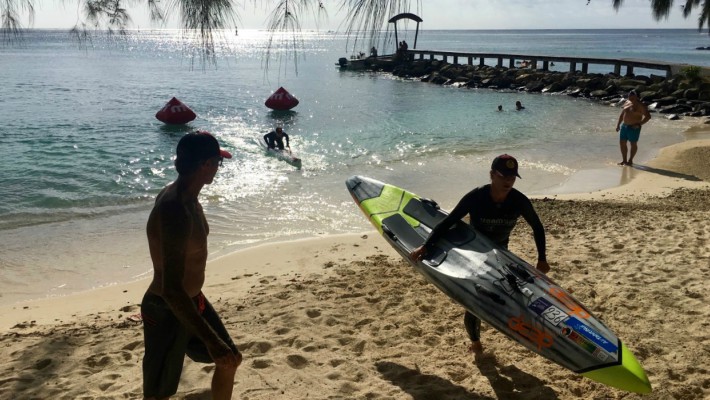 Comfortable as I am swimming for several hours or in the face of a big surf, this has no bearing on my actual speed. Apparently, you really have to practice that, which I can’t say was my case. So, after a quick run up the beach, a prompt removal of my lycra wetsuit and putting on my cap and goggles, I got into the water for the swim… but many people overtook me at this point. I made a good stab at the hurdles but, overall, I still lost too much ground in the swimming section of the race.

The women were up after us guys. Olivia Piana killed it on her All-Star board by Starboard SUP and had a good lead, which shrunk a little, but she maintained it on the prone. In the swimming part, you could see the difference again with the competitive swimmers. They were so clearly superior in terms of speed. Olivia placed 4th after giving everything she had. 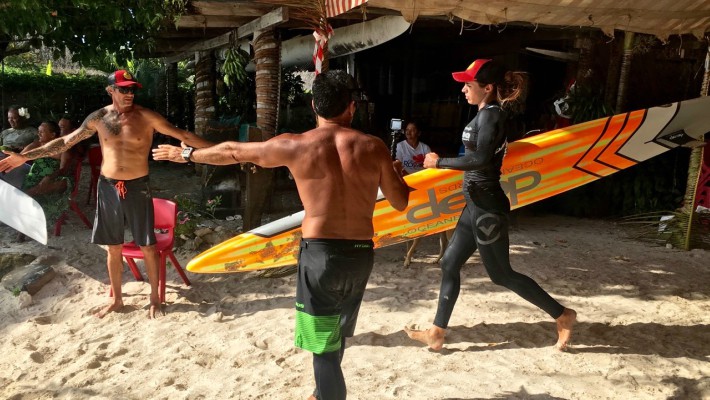 The most gratifying end to the race came at the finish line, as a friendly Tahitian was waiting for you there with a fresh coconut. No better reward! It also seems so much nicer, more colloquial and more eco-friendly when compared with the usual plastic water bottle.

When the last competitor rolled in, the Tahitian drums started to resound once again. We formed a circle and held hands to admire the performance of two beautiful Polynesian women dancing. The biggest of the drummers then broke into a Polynesian chant, which he performed with such spirit that most people told me they had goosebumps listening to it. After the chant, which was all about the sea, nature and fraternity, the dancers came back to the fore wearing seashell necklaces and they kissed each competitor to congratulate them on completing the event. 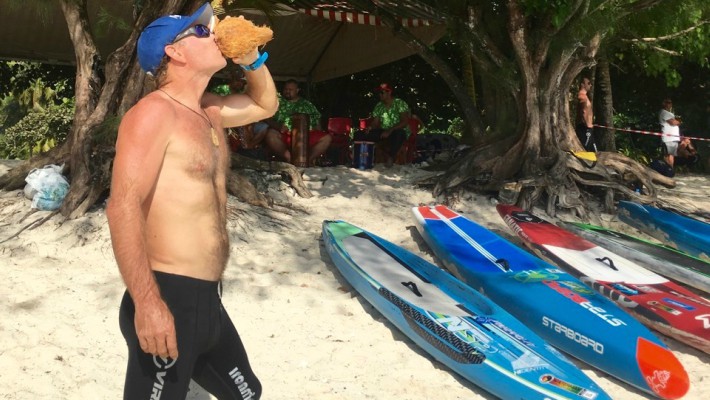 That was the whole award ceremony. I found it to be one of the nicest I have had the pleasure of experiencing in all the races I have participated in. It was full of energy and spirit (or “mana”, as it were), and it was kept short and interesting. Above all, the ceremony celebrated local culture and the whole group of competitors who took part, not just the top three on the podium at the end.

This encapsulates the very nature of the event. Although all the competitors are top-level athletes, with a diversity of backgrounds, and everyone is very competitive in whatever sport they do, this event is not so much about winning, but about putting one’s watermen credentials to the test in a convivial atmosphere and a gorgeous place. 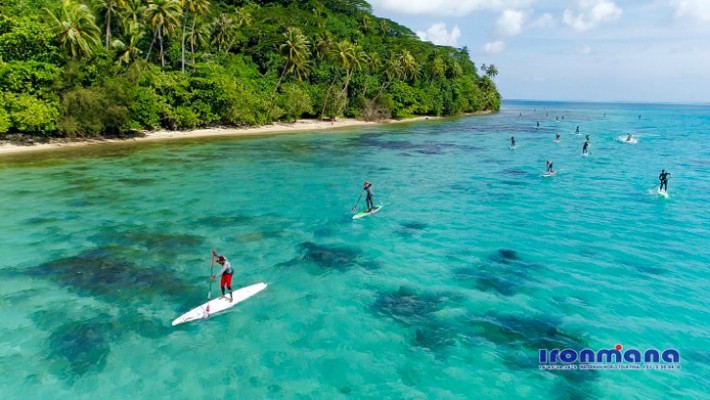 The camaraderie this week was palpable, and we all bonded to the point of now feeling like good friends. And of course, the event is made particularly unique by the element of surprise in each stage. Stéphan’s motto remains, “expect the unexpected”, and “always be ready”.

I don’t think I speak only for myself when I say this, but Ironmana (and Huahine), I’ll be be back! 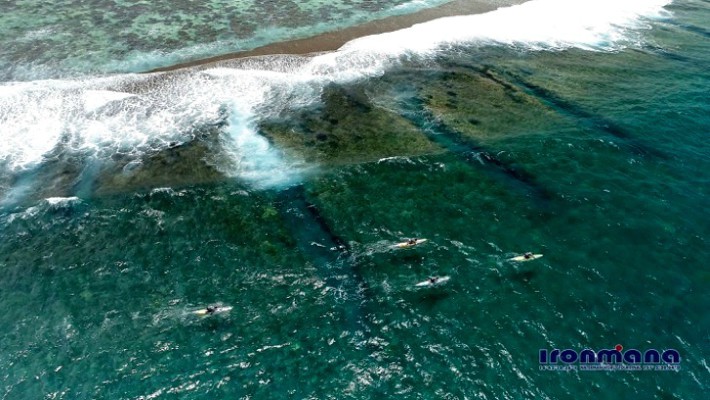