British paddler Nick Oppe set a challenge for himself during the winter of 2018. To stand up paddleboard across the longest lakes in Wales, England and Scotland, in under 24 hours. The challenge would involve over 64 KM of SUP paddling and 640 KM of driving. The challenge evolved after becoming hooked with SUP and doing small paddles around the local area. If you are motivated in creating a Stand up paddleboard challenge, here are 10 steps Nick took to complete his SUP challenge! 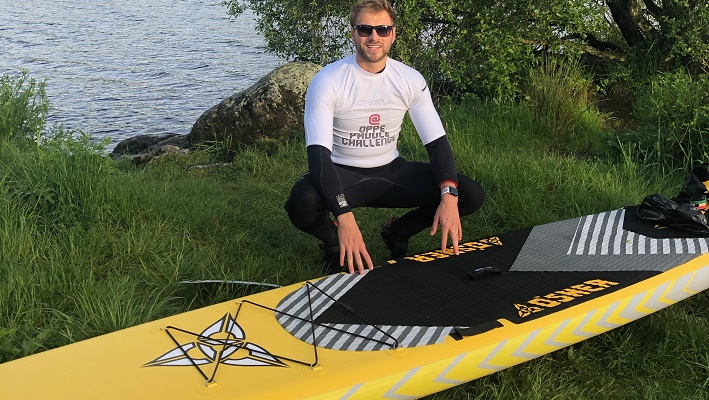 I have a few friends who have done some  good personal challenge events and raised money for charity. I thought it is about time I do something rather. I could never run a marathon, (although on my bucket list one day) and I don’t cycle or enjoy walking huge distances, so I thought about doing a Stand Up Paddleboard challenge.

I had heard about the three lakes paddle challenge, it was advertised by British Canoeing and after some quick research suggested that this could be the challenge for me. 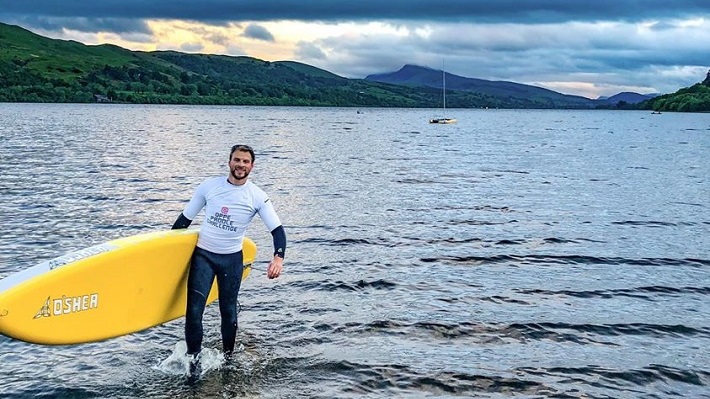 #3 Adapt the Challenge to Suit SUP
From what I could see people would do the British Canoeing Challenge in their own time over a couple of months, weeks or days. Then they could post their paddle times if they wished to do so.  They were using various styles of paddle craft. So I took this idea and tailored it to myself. I had seen Sian Sykes had completed the challenge on her paddleboard in over three days. I quickly did the maths and thought perhaps I can do the same, but in 24 hours! So from that moment the challenge was born. 40 miles across three lakes, in three countries in just one day!

I set the date of around 27th May. The reason being it was the closest time to the longest day I could take annual leave. Preparing for the 3 lakes challenge and training was quite difficult. What I found really hard was replicating the conditions for SUP  training.  I live on the British south coast, the sea state can change quickly, plus the tides have a huge influence on the sea. I may start training in calm waters but after 14 KM (9 Miles) of paddling, the sea state may be completely different. Added into this that I could only train in the evenings and weekends. 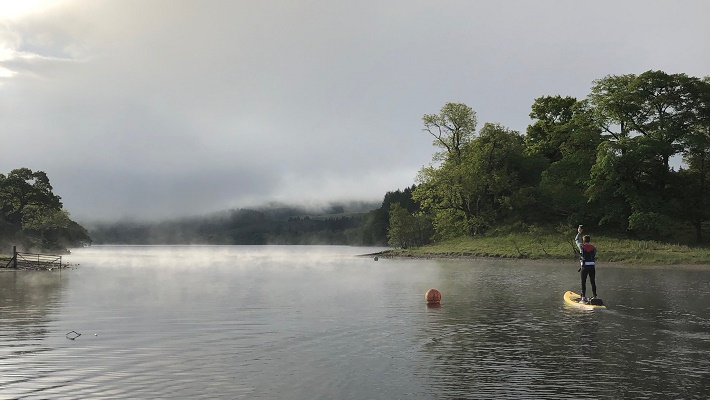 Therefore my training days on the water were narrowed down the days to when I could get out. If I was doing a one way paddle then I would need my wife  to be available to pick me up. Plus in the UK we have fairly short days until the end of March, again limiting my time on the water.

The logistics was easy, timings were calculated,  prevailing wind conditions, lake conditions, launching rules etc, were all worked out and taken into consideration.

#5 Start Training
British winters have short days so I trained in the gym. From January 2018 I spent most evenings  training! I focused on core,  flexibility,  cardio and strength. All which really helped push my physical and mental limits. At this point I downloaded the Paddle Logger app on my apple watch and hit the water several times. I used Paddle Logger to make sure my paddle speed for the challenge was realistic. 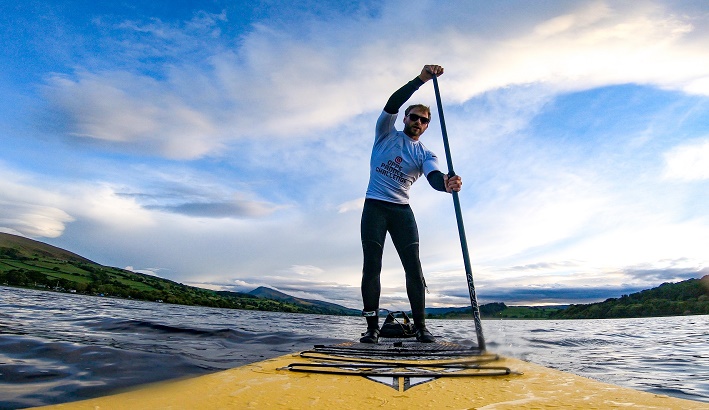 During training I wanted to average 3.5 kph to 6.4 kph over the whole distance, using my Paddle Logger app I could keep  my speed in check. Using Paddle Logger I could mark waypoints every 1.5 KM and see at which points I was slowing down. On Paddle Logger there is a visual tracker that turns yellow or red for slower speeds which is an easy way to quickly see the information. Absolutely ideal and this is what I was going to use for the challenge.

On the 27th May at 9 pm I launched onto Bala lake, Wales. The wind was light and the lake was  glassy. I just remember trying to take it all in, not easy when you are racing the clock. Every so often I glanced down to my watch keeping Paddle Logger on the screen noting my speeds and timing. As the timer clicked over to 50 minutes I landed the other end, where my wife Amiee, was waiting in the camper to pick me up. I packed the board away and we went to Windemere, in the North of England.

The journey to Windemere was about three hours so we arrived just after midnight. I spent the journey blogging about the first leg. The Paddle Logger app allows you to easily save and upload the route, timings, speed and loads of other statistics to social media really easy. This was great so that my friends and family could see how I was getting on. After a 3 hour sleep at the side of the lake it was time to get on the water. I launched at 5 am at Ambleside, which is the northern end of the lake.  I was expecting a light Northerly wind to kick in which it didn’t. I had never paddled Windermere before but it is absolutely breath-taking. It took me just over 3 hrs 10 minutes to reach the bottom of the lake. I then packed everything away again, and off set off to Loch Awe, Scotland.

During my journey to Scotland, I saw that I had burnt over 1000 calories on Windermere and over 400 on Lake Bala.  So I feasted on my energy pack that I had put together before the trip, which was full of good quality foods, energy gels, drinks, bars, you name it and it was in there. It didn’t stop me stopping off at a fast food place on the way up though!

The I spent the journey to Loch Awe eating. I ate continuously for the 4 – 5 hour paddle. The reason being that a feature in Paddle Logger syncs with Apple watch and displays your active calories that have been burnt, Paddle Logger is one of the few apps that does this! 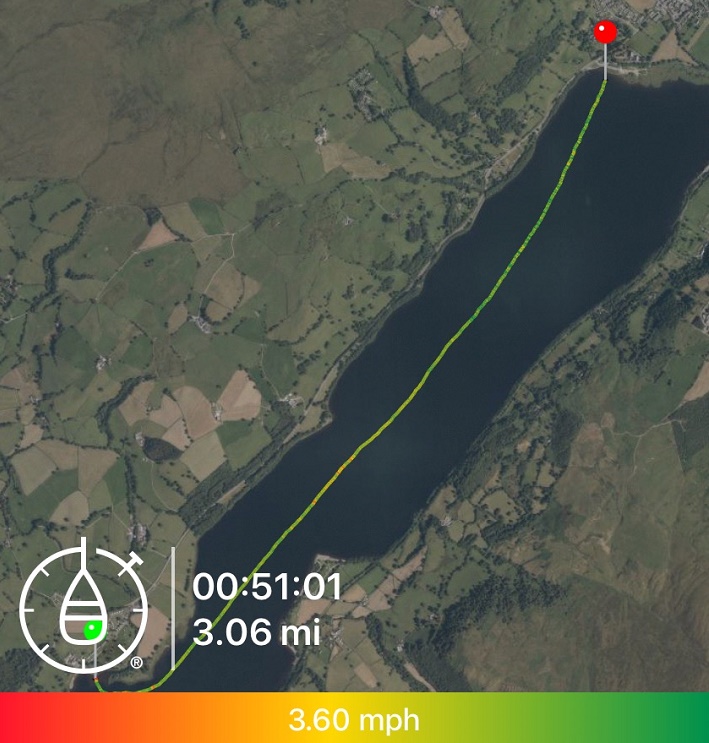 #8 Adapt to the Conditions

We arrived at Loch Awe at about 1:30 pm with a 7 hour paddle ahead, it was also 7 hours 30 minutes until the 24 hour deadline that I had set. I decided to paddle east to west on Loch Awe as it was the quickest route to reach by car. The wind forecast was light and northerly, it shouldn’t have affected me to much. However about 3 KM into my journey the wind kicked up and swung westerly, before I knew it I had 20 knots of wind funnelling down the loch towards me. The loch then became really choppy and I was forced to stop. By the time I got back to my launch point it was coming up to 4 pm. At that rate to get to the other side of the lake would have taken about 60 minutes then another 20 minutes to get launched.

At this point I made the really difficult decision to postpone the SUP challenge until the next morning. It was unsure if I could finish paddling across Loch Awe in daylight. At the time the loch was choppy, I was tired, the loch was 6 or 7 degrees and there are no real access points once get into the middle of the loch. So I felt it wasn’t wise to be out on the loch on my own! I was pretty devastated as I knew I had failed to beat the clock. 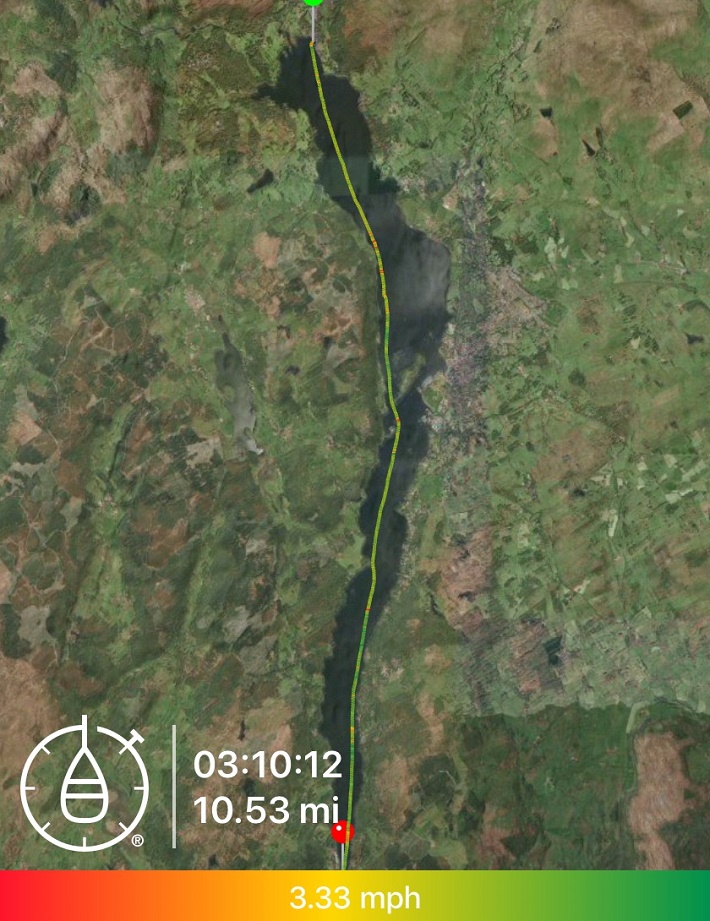 #9 Fight the Mental Challenge!
The next morning at 5 am we left the campsite and drove the 60 minutes to the west side of the lake. Its only 20 miles but the roads in Scotland are windy, narrow and single track in places so it takes a lot longer to cover distance. I launched at 7 am into what seemed to be a calm, frosty/misty morning, I got round the first corner in the lake and I was met with a light head wind, luckily this died around 4.5 KM. The views on Loch Awe are simply stunning, the loch is huge at 40 KM long and over 1 KM in width at places. I was the only person on this loch, I had the place to myself.

I put on my music speaker and did some dancing to pass the time. Mentally it was tough as it just keeps going and going. I stopped at KM point 17  for 10 minutes and restored some of my lost energy, (1100 calories this time according to the app) and then again at 27 KM where I managed to meet up with Amiee who had hot soup read for me! At 2.35pm on the 29th May, after 6 hours 28 minutes of paddling (the rest taking lunch and breaks) I finished the 64 KM journey. 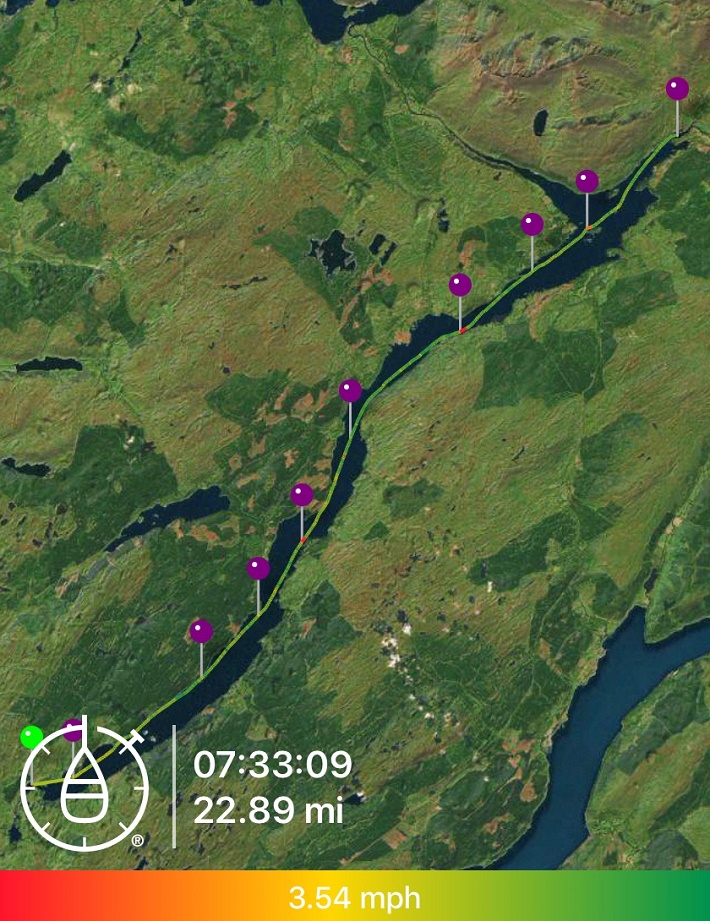 #10 Find a Great Support Team!
In a way I was sad, I knew that if the wind hadn’t let me down the day before I would have finished in around 23 hours. However it quickly faded when I realised what I had achieved. I completed the three lakes in three different countries in just over 41 hours. I was absolutely ecstatic with that. The weather had been pretty miserable and cold, and living in a cramped camper for the week was tough enough. I couldn’t have done this challenge without my wife Amiee driving me and helping me with all my gear.

I also couldn’t have done it without a decent paddle app. The Paddle Logger app was brilliant. It kept me informed of exactly how I was doing and easily allowed me to share this information with friends and family.

Don’t underestimate how much a GPS or the paddle Logger can help you to pace yourself, knowing exactly what you have completed and how far you have to go really helped me mentally. I absolutely loved using it during training, the challenge and its my go to app whenever I hit the water. 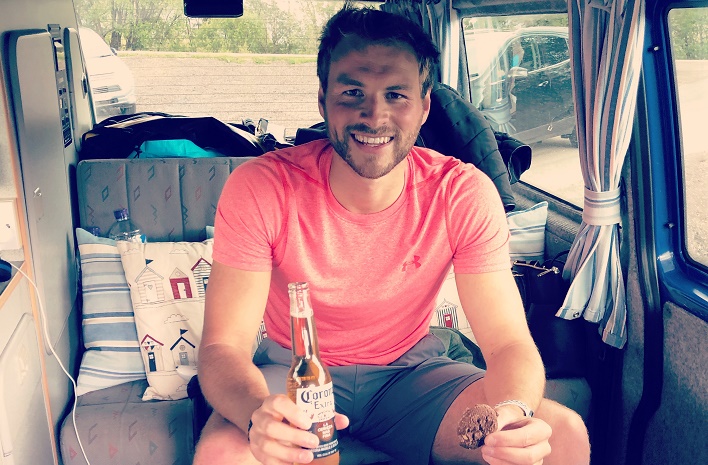 I would  like to say a big thank you to everyone who sponsored me for this challenge. At time of writing I have raised £1345.00 smashing my original target of £1000. It will all being going to MIND a mental health charity who make sure no one has to face a mental health problem alone.