Last year, TotalSUP was lucky enough to go to Guadeloupe to take part in a very particular kind of challenge, the 6th edition of ZE RACE, the longest downwind race on French territory. 3 weeks of intensive downwind races and of watersports activities of all kinds. 3 weeks of changeable conditions, of new friendships forged and long evenings spent drinking ti’ punch cocktails washed down with coconut sorbet! So, if you might be tempted by a trip that includes an unforgettable sense of adventure, a unique sporting challenge in a variety of disciplines, learning how to downwind and having fun like never before against a sunny and warm island backdrop even in these winter months, then check out our 10 reasons to take part in ZE RACE 2018! 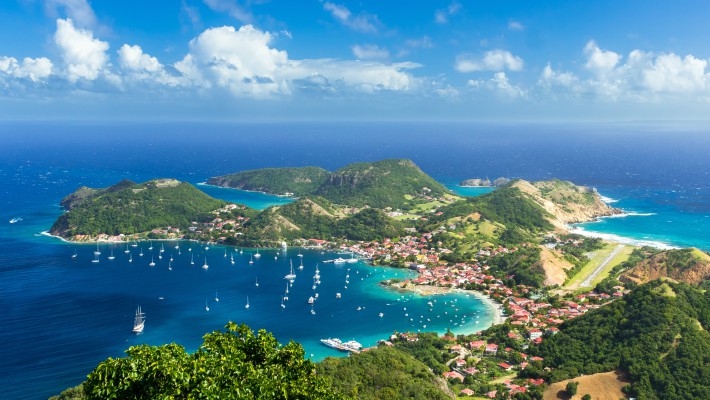 The only 50km downwind on the French SUP Race calendar, ZE RACE is slowly gaining a reputation for itself as something of an alternative to famous Hawaiian downwind races of a similar nature. To this effect, the use of the nickname “Caribbean Molokai” has been steadily growing among paddlers familiar with the event.

For the race itself, there are two islands to paddle between, going from east to west, from Petite Terre to Grande-Terre, in line with the swell and the trade winds. The run is to be completed in a timeframe of no more than 8 hours. This is the challenge set by the Watermen Karukera Club, which organises the race. The race may be done on a one-man SUP board, or in teams of 2 or 3. Likewise, you can do the race on a SUP foil, on surfskis, on a prone paddleboard, or on an outrigger canoe (OC1, OC2) or va’a (6-person).

Downwind enthusiasts will find oceanic conditions that are perfect from beginning to end. On 27 January, the 2018 edition will be a celebration of ZE RACE’s 7th year of existence (already!). 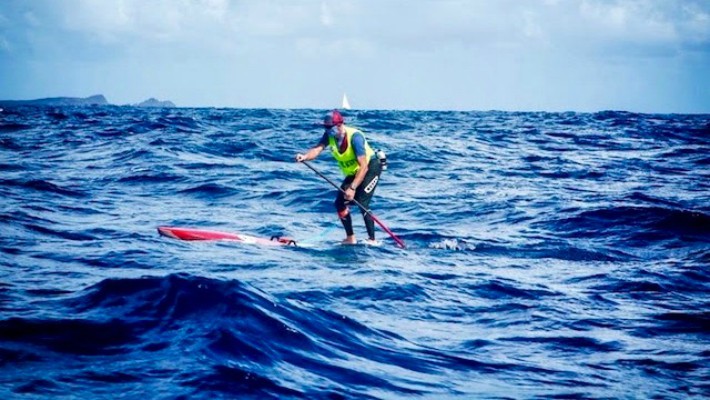 We can say with great certainty that the Watermen Karukera Club puts on quite a spread in order to organise ZE RACE each year. An organising committee, which is made up solely of volunteers, works tirelessly over a period of several months in order to offer an event that is up to everyone’s expectations, be they competitors or mere partners of the event. 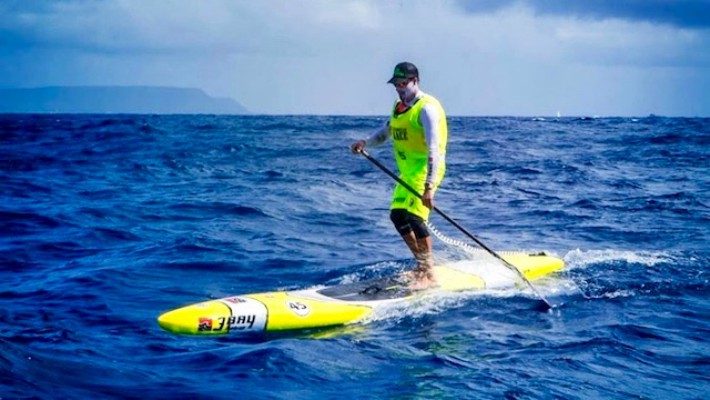 3. The welcome is warm, and so is the weather

The hearty welcome that the locals offer to participants in ZE RACE is as warm as the temperatures competitors are greeted with, and these remain clement all year long. You’ll be welcomed by locals as if you had a long-standing friendship with them, and they will be the first to help you discover the wonders of the archipelago they call home, be it on land or on sea.

And skilled racers they are too, with a Guadaloupe SUP Race organised jointly by the French Surfing Federation (FFS) and the French Canoieng-Kayaking Federation (FFCK), which puts on around 15 races between the months of September and June. It’s safe to say that they’re a joyous and athletic bunch in Guadeloupe! 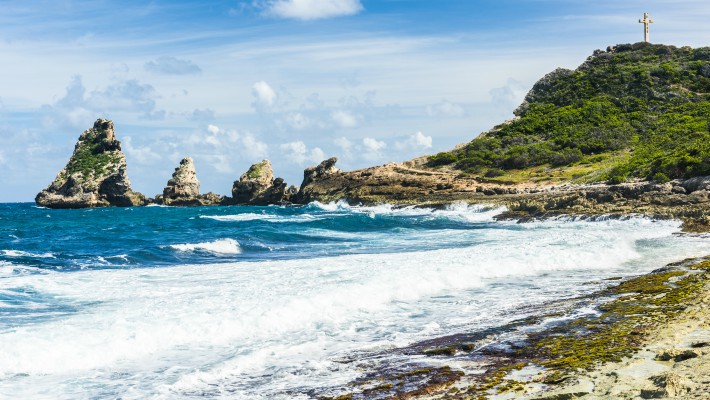 4. Start the new season with a bang

Though January is more or less the low season for SUP racing elsewhere, and you’d need to be highly motivated to go paddling in 10°C waters after work, things are different here!

ZE RACE takes place at just the right time. While the weather is cold and wintery in mainland Europe and much of the continental United States, the beaming sun rays in Guadeloupe are perfect for getting a bit of respite from those harsh temperatures and building up your vitamin D levels. It’s also the perfect opportunity to get back into some serious paddling and to prepare oneself for the upcoming new season back home.

Heading off to the Caribbean sunshine for two weeks and participating in one of the best downwind races out there doesn’t sound half bad, especially with Christmas just around the corner! 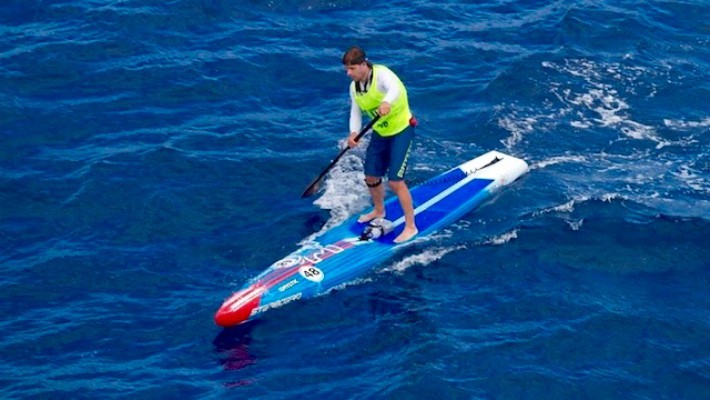 Guadeloupe is the ideal playground for practicing your downwind technique, given the shape of the main island, its perfect positioning (with its swell and the accompanying trade winds), its little islets, its varying difficulty levels due to its many different downwind runs and its exceptional climate.

You’re spoiled for choice in terms of practicing your paddling and getting that perfect downwind, with the island’s peaceful lagoons and its extensive coastal runs out on the open sea. In terms of distance, again, it’s very much à la carte, with runs of just 4km on the one hand, and those amounting to as much as 60km.

In terms of wind conditions, December through to February are the best months, with around a dozen days of winds reaching between 15 and 25 knots. ZE RACE takes place on 28 January 2018, right at the heart of this period.

Many local riders take part, some of which compete at a very high level on the French and international SUP Race scene. And of course, many of the international participants need no introduction. This year, you’ll have the chance to hone your downwind skills alongside the likes of Tahitian all-star Georges Cronsteadt, Floridian SUP and outrigger addict Garrett Fletcher and French waterman par excellence Romuald Mamadou. 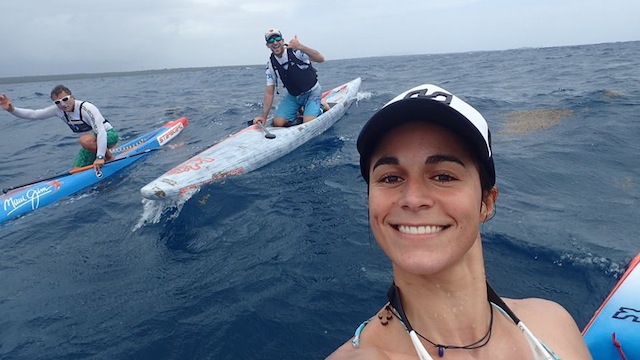 6. Not one, but several races to take part in!

And let’s not forget, ZE RACE is not just a one-race experience! Along with the weekend that precedes the main race itself, it’s a double downwind two-parter. The KKC’s (Karukera Kayak Challenge) 8km and 20km runs in Basse-Terre are taken into account for the Guadeloupe championship, and the Wednesday before ZE RACE itself, you have a friendly 8km downwind run that will help competitors acclimatise and get warmed up before the day itself. The weekend following ZE RACE, there is also the Rivière Salée marathon, which is a 13km flatwater race taking place in a lagoon known as the Grand Cul-de-sac marin, at the edge of a river and a local mangrove plantation.

In total, you could accumulate up to 100km worth of downwind racing over the course of three weekends… and that’s not counting the downwinds for training and recreational purposes. 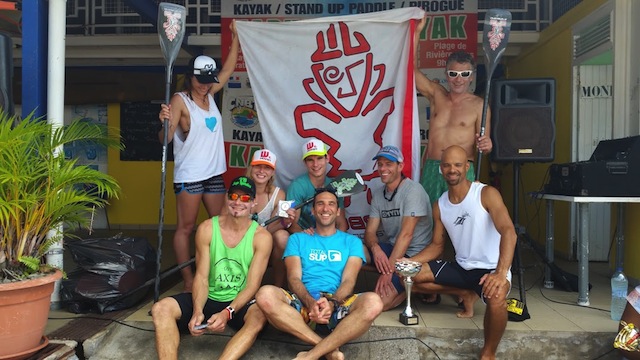 Guadeloupe is an archipelago that consists of 5 islands, each one as charming as the next. You have Grande-Terre, Basse-Terre, La Désirade (along with Petite-Terre), Marie-Galante and Les Saintes.

Guadeloupe is of course French territory, and as an ideal destination for a family holiday, you’ll be treated to all of the comfort and the services you’d find on France’s mainland. Plane tickets can be found at quite reasonable prices (see below) and the local currency is of course the euro. There is a huge offering in terms of accommodation and car rental. Everything is in place so that your holiday is an unforgettable experiences.

Guadeloupe is also the home of delicious Caribbean rum, a famous Volcano Trail, the renowned Guadarun marathon, the Karujet jet-ski world championships, its very own marathon and carnival, and it was the host of the 2016 Davis Cup. It has also produced some of France’s most celebrated sporting personalities, from multiple Olympic gold medallist in judo Teddy Riner, to world-class tennis player Gaël Monfils.

In sum, a land of champions, a land of perfect holiday-making, and above all, a land of stand up paddle! 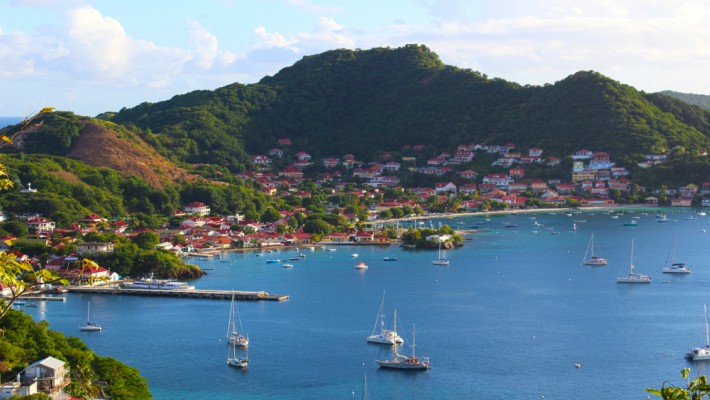 A little local delicacy to delight your tastebuds when you’re not frenetically paddling across the shimmering waters of this Caribbean paradise. Who can resist this perfect combination of coconut milk, condensed milk, cinnamon, lemon zest and vanilla? And all of it concocted in a wooden coconut ice cream maker by the seaside, in the shade of the nearest coconut tree. Sound like a cliché? It may very well be, but seeing is believing, so go and see for yourself. You won’t disappointed.

Just a word of warning, try not to succumb to this sugary delight just before a long downwind run. Best to leave it to the end, as a reward for your noble efforts! 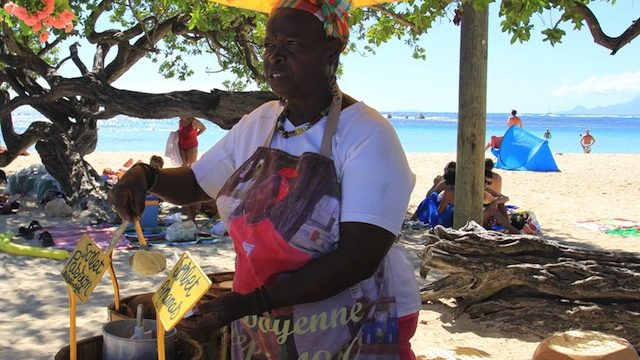 Guadeloupe is also well-known for its year-round near perfect surf spots and conditions. Chief among these are: Le Moule, Saint-François, Sainte-Anne, Anse Bertrand, Port Louis, Gosier and Bananier. In the winter months, the great big swells coming from the north serve up waves that can reach up to 4 metres in height in some parts.

Champions from Guadeloupe, including Léo-Paul Étienne, Charly Martin and Tim Bissot regularly make waves (pun intended!) at major surfing or SUP surf competitions, and the local youth are making quite a name for themselves at the French championships in these fields. 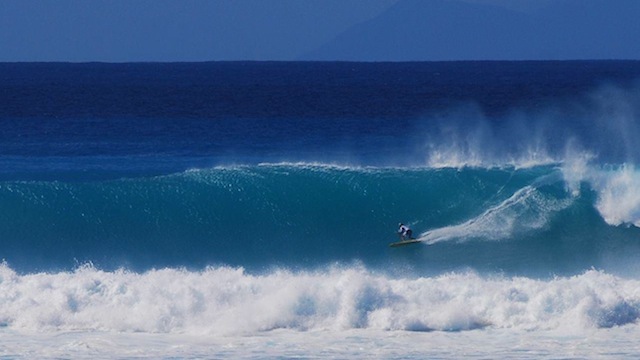 With its amazing downwind credentials, Guadeloupe is also a perfect spot for participating in the Polynesian/Hawaiian disciplines of outrigger canoeing and va’a. Coinciding with ZE RACE, every year, French outrigger canoe manufacturer Woo Outrigger organises its highly recommended Downwind Camps in Guadeloupe. Woo’s packages offer interested parties the chance to spend a week in the company of highly qualified coaches (including the company’s founder, Guy Ringrave), to accompany fellow downwinders in shared accommodation for the duration of the camp and to partake in a week-long adventure of downwinds and water-based athletic mastery. The only requirement is that you be in shape, as it is no walk in the park… but it is a chance to learn how to do outrigger canoeing with the best in the business! 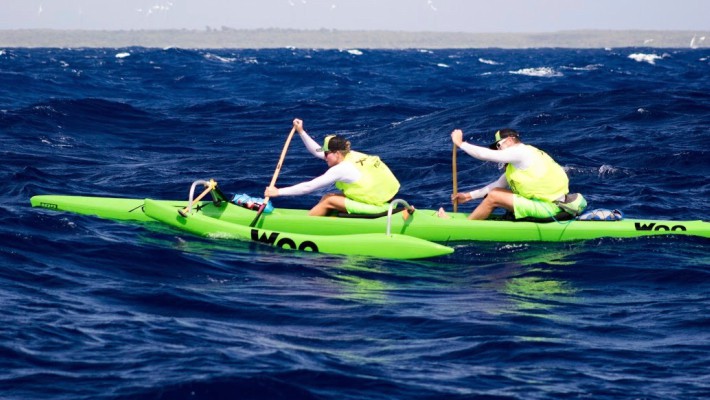 How to get there

Once there, everything is put in place to facilitate the logistics of competitors coming from abroad, from collecting your board from the transport delivery service, finding a place to store your board and board bag for the duration of your stay, and finding a rental company to loan you equipment, to helping you find a place to stay and a place to rent a car. 5 trailers with board racks are also made available to assist with getting your boards to the downwind training spots before ZE RACE actually kicks off.

On the day itself, everything is set up and ready to go, with each competitor equipped with their very own GPS tracking device so that their progress may be followed live online, and everything being captured photographically both on the water itself and in the air. There is also a specially put together athlete’s village waiting for competitors at Pointe-à-Pitre’s marina as they land onshore, complete with a massage corner, a restaurant and a concert held to mark the closing ceremony. 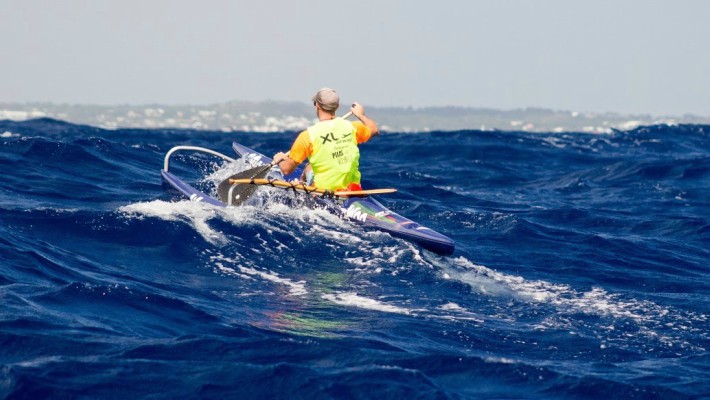 So, have you booked your flight yet?

In sum, the ideal time to go to Guadeloupe is from 18-31 January 2018. This will give you the chance to partake in the Karukera Kayak Challenge, practice your downwind technique afterwards, take part in ZE RACE on 27 January, eat delicious coconut ice cream sorbet, surf every waking moment, kitesurf in between intense downwind sessions, sample the local ti’punch, try out outrigger canoeing and, of course, go chasing waterfalls… before heading home to a cold, harsh winter. Sound like a plan? You bet it does! 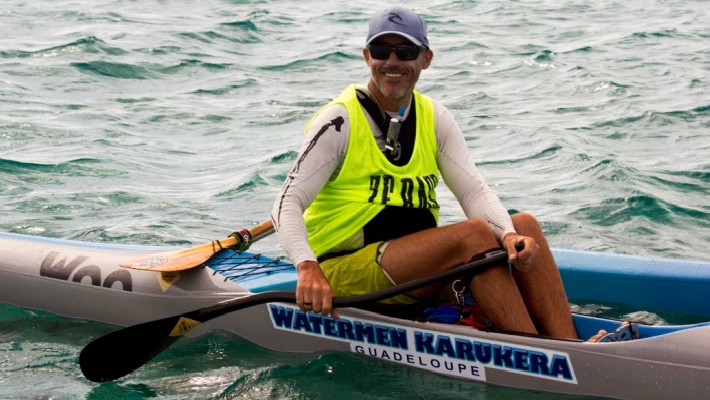