The 31st Annual Santa Cruz Paddlefest went down for the most part in pretty ideal conditions the last weekend of March, at the famed Steamers Lane in Santa Cruz, California. Originally this event only featured kayak surfing but in the recent years with the rise of standup paddle-boarding, SUP surfing and racing have been added to the event. Since steamers lane like most famous surf spots around the world aren’t to sup friendly, this event has become a favorite for many SUP surfers who relish at the opportunity to sup steamers lane with only 3 other guys out. I was very fortunate this year to make the trip to Santa Cruz with the F-One SUP crew to participate in both the surf and race events.

The event kicked off with some windy/choppy but fun head high conditions for the first round of the surfing heats on Friday morning, the high tide created extra backwash coming off the cliff which challenged competitors to find the right waves that offered clean faces for high performance maneuvers. Some of the notable standouts from Day 1 in the Men’s pro class were the usual suspects such as Dave Boehne (Infiniti) with some silky smooth backhand surfing, Zane Schweitzer(starboard), Bernd Roediger (Naish), Giorgio Gomez (Infiniti), both Finn and Jeffrey Spencer (Quatro), Danny Hughes (Kings), Anthony Maltese (Riviera) and Poenaiki Raioha (F-One) who was punishing lips as usual. In the women’s pro class, Izzi Gomez (starboard), Fiona Wylde (starboard), Maui girls Lara Claydon (starboard), Annie Reickert (Naish) and Santa Cruz local Kali’a Alexiou (Boga) were some of the standouts in the challenging conditions on Friday. Luckily we just had round 1 SUP surfing scheduled for Friday, because the wind and eventually rain came in pretty hard making for “victory at sea” conditions by lunch time. 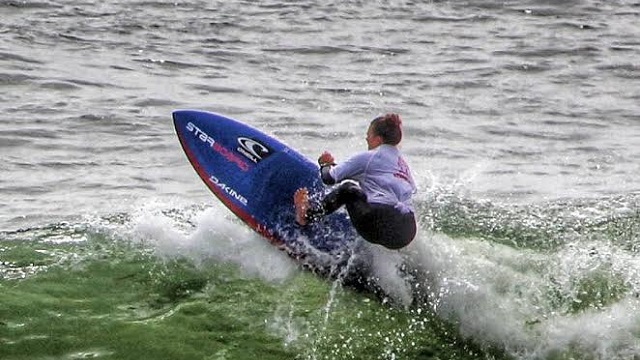 Saturday morning featured the 5k and 10k race at Cowell’s Beach followed by round 2 of the sup surfing heats in the afternoon at Steamer’s Lane. The ocean cleaned up overnight so we awoke to some great racing conditions, low air temps, and clean water with some small glassy rollers to surge on. The course was 5k total with a pretty long beach so the 10k racers did two laps plus a long beach run after both laps, the race was a beach start with some small shore break to contend with. The course was kind of a upside down ‘L’ shape going out and around the Santa Cruz Pier and south to another buoy outside of the Santa Cruz Harbor. There was a tight pack of seven guys shortly after the start who all converged on each other at the first buoy, which included Slater Trout (Infiniti), Mo Frietas (Focus SUP), Giorgio Gomez (Infiniti), Ryan Funk (starboard), Noa Hopper (404), Poenaiki Raioha (F-One), and myself (Josh Riccio F-One). The ocean was calm enough to make drafting still work but at the same time the smallest rollers were on offer to get a little extra surge every once in a while so there was more position changing going on in the front pack then your usual drafting race making the racing more exciting for everyone watching and competing. 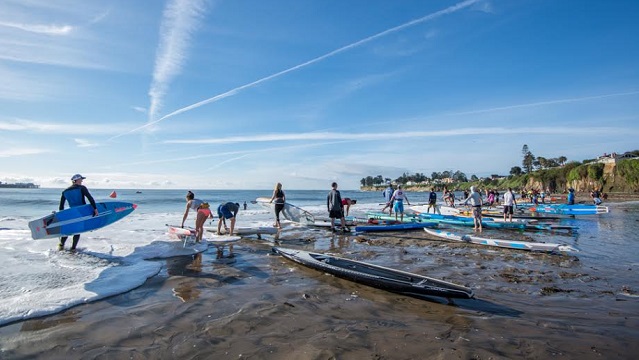 After the first lap all seven guys in the front pack hit the beach at the same time and after the beach run pretty much everyone ended up back together in another tight pack heading out for the second lap, after hitting the turn around buoy located further south near the Santa Cruz harbor racers were required to round an additional buoy out near the top of the point at Steamers Lane which had some clean head high waves pushing through, I rounded the last buoy in 6th place and to my surprise everyone made a sharp turn straight towards the finish at Cowell’s but seeing a set outside I choose to sprint straight to the surf to catch a wave into Cowell’s, since the surf kayak heats were running I actually had to let the first wave go so I didn’t interfere with a competitor in the surf kayak, but luckily I was able to catch a wave by myself right along the cliff that took me from 6th to 1st with a few board lengths ahead the rest of the pack, as expected though the rest of the pack was able to catch the following wave which allowed Slater Trout to catch back up to me, at this point Slater and I opened up a bit of a gap on the rest of the field and managed to catch a wave together at Cowell’s which Slater Trout managed to ride a little longer given him about a 5-10 second lead on me to the beach, unfortunately once I hit the beach my body was not feeling the beach run, so although I hit the beach 2nd, Ryan Funk smoked past me on the beach run making it Slater Trout 1st (Infiniti), Ryan Funk 2nd (starboard), Josh Riccio 3rd (F-One), Mo Frietas 4th (Focus SUP), Giorgio Gomez (Infiniti) 5th, Noa Hopper 6th (404), and Poenaiki Raioha 7th (F-One). 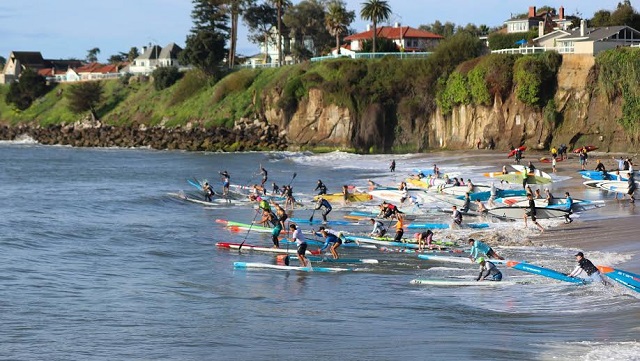 In the women’s race Fiona Wylde took the whole-shot followed closely by Jade Howson who was able to keep pace for most of the first lap but with the residual rollers and bumps leftover from the previous day,Fiona Wylde was able to pull away and claim the 10k race making it Fiona Wylde 1st (Starboard), Jade Howson 2nd(Riviera), and Genna Flinkman 3rd (Infiniti).

Saturday afternoon we had our second round of sup surfing heats in ideal 5-7ft+ steamers lane, with the stellar conditions the level of paddle surfing was insane with every heat featuring some of the best high performance paddle surfing I have ever seen at a sup surf event outside of the APP World Tour(formerly known as Waterman League), in the surf everybody was given a chance to surf two heats and then your combined heat scores were added which is how the men’s quarterfinalists were decided. With the women’s field being a little smaller then the mens the women were cut down to just a four girl final for Sunday, leaving Izzi Gomez (starboard), Fiona Wylde(starboard), Annie Reickert (Naish) and Santa Cruz local Kali’a Alexiou (Boga) to battle it out in the final Sunday afternoon. 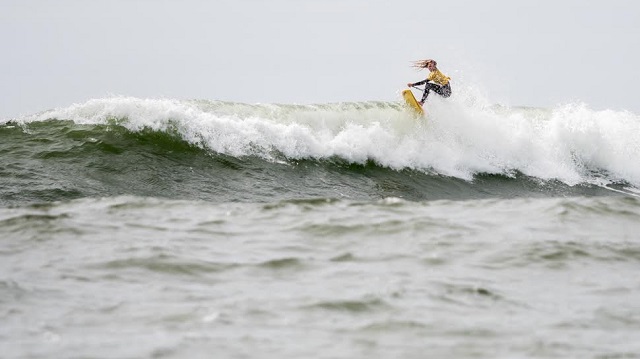 Sunday morning started with the men’s quarterfinals heats which ran in some fun head high surf at the main peak of Steamers Lane, the first heat of the quarterfinals featured a stacked heat with Sean Poynter, Giorgio Gomez, Bernd Roediger, and Poenaiki Raioha which could have easily been a final at any world tour stop and besides the actual final it was probably the most exciting heat to watch of the event, all four guys were trading off and absolutely destroying the fun walls that Steamers Lane had to offer, thankfully I was not a judge because it was nearly impossible for me to pick the two best out of that four man heat, however Poenaiki and Bernd were the two chosen to move on to semis and eventually both made into the four man final. The other quarterfinal men’s heats were just as exciting making the judges have to work really hard to dissect, and analyze what two surfers deserved the nod, unfortunately in my quarterfinal I lost to a tie breaker against Slater Trout who had the same heat total as me, but had a higher single wave score than me which advanced him into the semis where he ended up bowing out against the in form Bernd Roediger, and Tahitian Poenaiki Raioha. Anthony Maltese was the standout goofy footer on finals day who was laying down some really powerful turns on his backhand and managed to find some great waves in his quarter and semi final heats that allowed him to absolutely destroy the walls that were rolling through steamers lane. 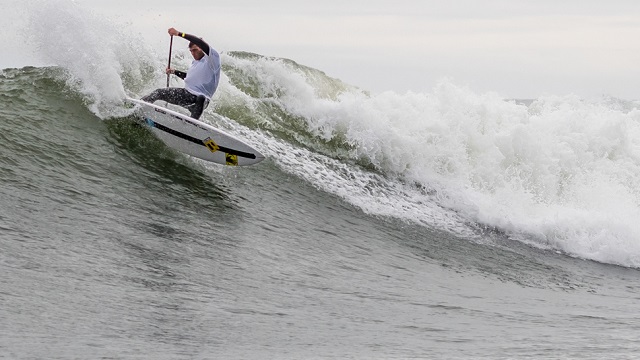 The men’s sup finals featured Mo Frietas, Bernd Roediger, Poenaiki Raioha, and Anthony Maltese. The waves for the finals were firing, allowing all the finalists to showcase what high performance paddle surfing looks like for the spectators on the cliff. All four surfers where exchanging waves at the main peak of Steamers lane going blow for blow on the very rippable walls coming through “the lane” entertaining everyone on the cliff and leaving it to the judges to make the hard decision to decipher first through fourth for the men’s final.
The women’s final was just as exciting, with all four girls absolutely killing it. Annie Reickert and Kali’a Alexiou looked to be controlling the heat in the beginning, but half way through Fiona Wylde and 3x sup surfing champ Izzy Gomez found their stride and managed to find some great  waves that allowed each girl to drop some high scoring rides. 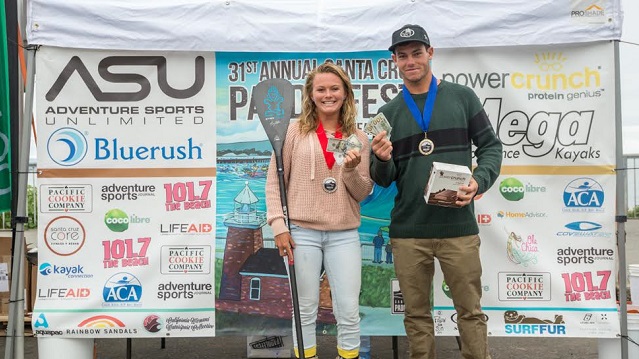