If you’d ask what place is the epitome of coastal vibes, it would have to be California. What determines the enduring pull of the Golden State? To name just few, it’s the surf and skateboarding culture, the cinematography, the road and the Googie (SoCal’s signature architectural style), the In-N-Out burgers, the hype of tech giants and start-ups of Silicon Valley, the hyperreality of America and now…stand-up paddleboarding. TotalSUP had a unique opportunity to dive deep into the Californian SUP culture and the history of the sport rooted in SoCal, in a conversation with Infinity SUP Team Rider, Kristin Thomas, SUP Consultant, Guide, Coach, Executive Director of Standup Paddle Industry Association (SUPIA) and a competitive SUP athlete. 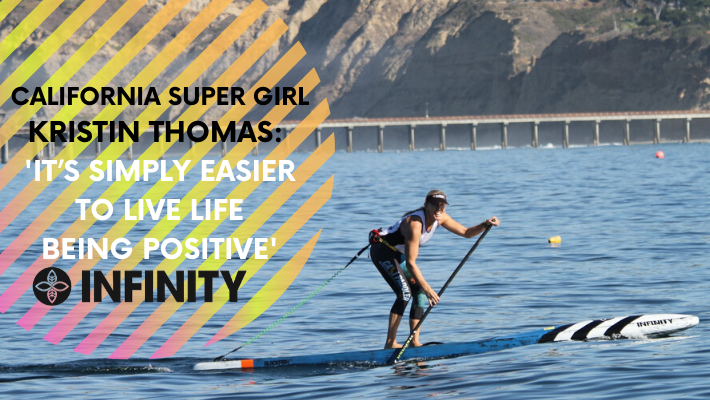 Hi Kristin! Dana Point, California is widely considered the SUP capital of the world. Could you share your experience on the growth of the sport and how it has evolved?

Hi! Dana Point is a small town, but has both a harbor and an iconic, beginner friendly surf spot (Doheny). With a mild year-round climate, it is an optimal place to learn and continue to enjoy many aspects of stand-up paddling, including recreational, racing and surfing. Of course the Battle of the Paddle and Pacific Paddle Games are what really put Dana Point on the map. But probably the biggest factor in making Dana Point a ‘hub’ for SUP is that it is right in the middle of SUP and surf lifestyle businesses. MANY of our own early board brands have a home base within 30 miles of Dana Point and brands like Infinity are right here in town!

SUP had already been introduced here and taken hold with innovators and early adopters alike before I started: Laird Hamilton SUP surfing in Malibu, pros like Mickie Munoz making his own makeshift paddle to try SUP, and shapers like Ron House and Steve Boehne were locals early on the scene. 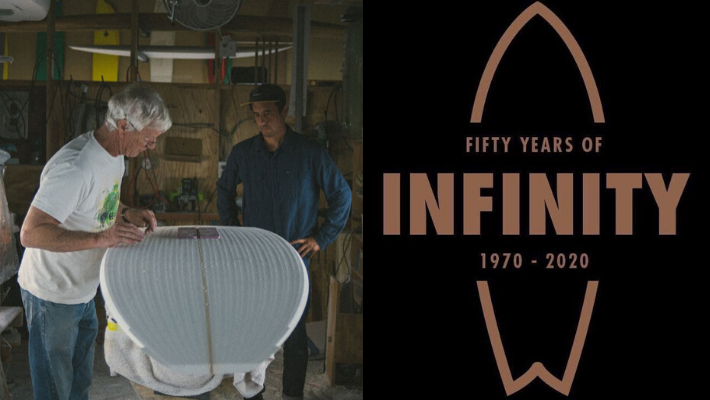 Besides the biggest local racing influencer – the launching of the first Battle of the Paddle 2008 – other existing watercraft racing events have really helped SUP grow quickly in our area. Outrigger and prone races added SUP divisions to series like Hobie-Hennessey & SoCal Ocean Racing, and many new races started in the exponential growth years of SUP. While we’ve seen some races lost or postponed (namely those that counted on sponsorship), the race scene is still strong. We have a long way to go in organization of our sport and are currently in reorganization phase. But I am registered for four races in California in March, so I definitely don’t agree with those who say SUP racing is dead!

In your opinion, what defines the Californian SUP culture today?

Many factors come into play: year-round availability and access to water, the coastal/surf culture (akin to what Australia, Hawaii and other Island cultures have), early adopters of anything ocean/water sports related and the diverse geography (not only miles of Pacific Ocean, by mountains with lakes and rivers of central & Northern California). But overall, SUP culture is definitely more surf oriented in California.

How did you discover the sport of stand-up paddleboarding?

I first saw stand-up paddling around 2008 at my local beach in Laguna and surfing Old Man’s at San Onofre, and through the generosity of strangers I got to try it! I’ve heard reference to the beginning of SUP being like the Ohana stage of surfing in 50’s Waikiki where ‘all are welcome’. I definitely found that to be true in SUP! Folks I met were SO open to share their equipment and their stoke! I knew it was something I wanted to do even before I hopped on a board. Love at first sight confirmed by the first paddle. When Santa didn’t bring me a SUP board Christmas 2009, I immediately jumped in a bought myself a board and a paddle the first week of 2010. Three weeks after purchasing that Rogue all-rounder, I entered my first race – the HanoHano in San Diego – on the advice of the seller of the board, Rick Karr. I was bitten by the SUP racing bug and amazing community around the young competitive SUP world and haven’t stopped since! 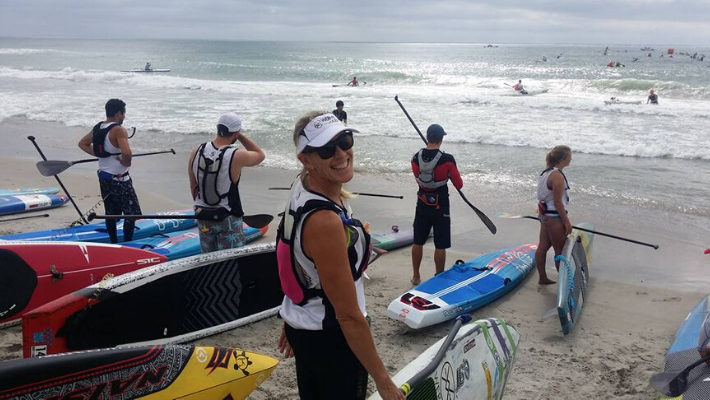 You’re a Founding Director of SUPIA (Stand Up Paddle Industry Association). Could you tell us more of about the organisation and its mission?

The mission is two-fold: to bring the businesses in the unique stand-up paddle space together to benefit both the entire industry, as well as each individual member’s business. To reflect the inclusive nature of SUP itself, we invited ALL types of business to be a part of SUPIA from the beginning. Networking, promotion, education, research and created a united voice have all been pilars of SUPIA’s work in its first seven years. The Industry Association was not my brain child, but after a couple years of trying to get it off the ground with only volunteers, I was asked (having been the director of a non-profit) to get it off the ground and create a job for myself. We officially became a 501c6 in 2013. This past year we also added individual memberships as SUPIA is primarily a volunteer organization we wanted to include SUP enthusiasts.

Your social media profiles burst with positivity and women empowerment through sport. What drives you as a community builder and a female SUP athlete?

Wow, thanks! I consider that a huge compliment. As an older athlete, I have lived through the ‘beginnings’ of the acceptance of women as athletes. I saw first-hand Title IX in action when my first High School coach didn’t want girls on his Cross Country team (but was forced to take us) as women’s teams were being added to existing men’s teams. We have such a unique and special opportunity to get SUP racing off on the right foot with equality for men and women right from the start. Not only is stand-up paddling the FIRST water sport that recreationally has as many (perhaps even more?) females as it does males. 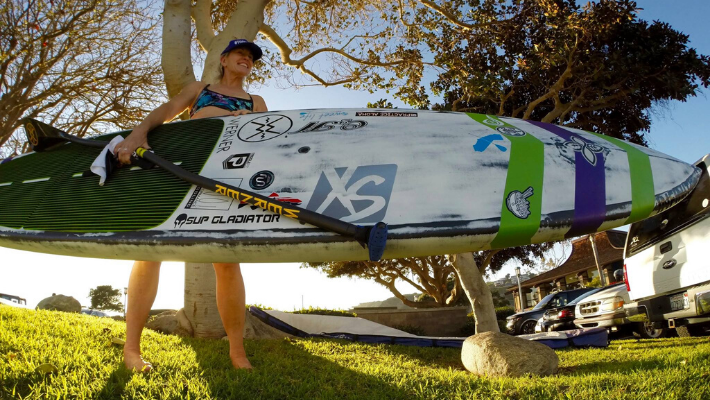 Being a woman, a sports athlete, coach, exec director, spokesperson what defines you first? Or is it all of these aspects and personas experienced simultaneously?

Seasons of life! I am definitely a multi-tasker by nature and necessity, but I do think I have intentionally embraced many roles simultaneously at this stage of my life. Not always successfully I might add! LOL, a couple of decades ago, my primary role was mother (my amazing children are now 25, 27 & 29). I found SUP just when they were starting to ‘leave the nest’ and I was intentional about starting to take back time for myself and pursue thing that I love beyond wife, mother, and worker. So lucky to be in this place and space I am in now.

Infinity has been in the mix since the beginning of SUP in Dana Point, California. Could you tell us more about your collaboration with the brand?

Infinity has been around for 50 years! Isn’t that amazing! When I was learning to regular surf 20 years with a group of local girlfriends, I bought my longboard from Infinity, so I’ve felt they were ‘my store’ for a long time. For the last few years, I’ve had the honor of being an ambassador and racing for As their ‘Masters Female’ Racer.

Your Infinity quiver of choice?

There are so many great boards to choose from, but I have been a lover and believer in the BLACKFISH from the beginning. Living coastally, it’s ideal because it handles any type of water. I’m excited to test out the new 2020 Blackfish Dugout! I moved to 14’ a couple years ago and my current board is 23” wide. For SUP surfing, it’s the Round Nose Blurr…perhaps a New Deal next?

Could you share your three iconic SUP spots in California?

The locations I frequent are pretty iconic: SanO for surfing, Dana Point and Newport Harbors for training. Laguna Beach for the casual paddle (underwater and coastal beauty), but I’m going to go with three that are ‘destinations’ for me in our wonderfully large and diverse state:

Santa Cruz is such a great spot for SUP surfing, racing and causal paddling. Heading for the Santa Cruz Paddlefest where I will get to 1) Surf Steamer Lane, Indicators & Cowell’s with a fun right off the cliff and a channel filled with Sea Otters 2) Race off the beach and around the pier where the sea lions will be barking and there is a good chance of seeing dolphins and maybe whales 3) Visit my friend Trudie’s SUP Shack in the harbor for a social paddle.

Lake Tahoe is one of the most gorgeous places on earth and an absolute epic place to stand-up paddle at high altitude surrounded by the Sierra Nevada mountain range. Should be on everyone’s SUP Bucket list.

I’m going to put San Diego on my list too. With Mission Bay in is out biggest southern California ‘flat’ water destination and many ocean and lagoon destinations throughout the county. A great place to paddle 12 months of the year.

Super excited to be guiding SUP trips for the first time! I’m definitely co-guiding a trip to one of my FAVORITE Mexican destinations, Sayulita for a week in November. Also working on bringing a group of SUP racers with me to a portion of the EuroTour, but that one is still in the works (contact me if you’re interested in either one!)

Also stoked to be added to the roster of substitute coaches under Performance Paddling right here at home. I’ve loved being a part of our Training Club and love adding the opportunity to occasional coach in Anthony Vela’s great program.

Of course LOTS of racing! Mostly all the SoCal races I can, but also Carolina CUP and the Gorge in the US, and hopefully some out of country racing! Excited to have rankings again which gives a little more structure and motivation to my race choices … now if I only had more frequent flyer miles!

Any predictions on how the sport will develop in the near future?

In terms of racing, I think we often forget how young and new this sport is! Just like the exponential growth of the recreational side, racing growth was meteoric for a few years. We are having a bit of ‘settling’ period now as the whole scene continues to figure out what the new normal of racing is after brands and races have disappeared. We have much to do to organize SUP racing, but that isn’t a bad thing! While the Olympics aren’t everything, but I do feel like the fact the Court of Arbitration of the IOC is sitting on the ‘case’ between ISA (International Surf Association) and ICF (International Canoe Federation) is not helpful. Waiting for their decision is holding up our forward progress.

What is BEST about stand-up paddling is the fact that it can be enjoyed on ANY water by virtually ANYone. It’s also what is most CHALLENGING about stand-up paddling. We have not fully defined ourselves as a recreational activity, as a competitive sport or as an industry because of the broad and inclusive nature of SUP. What I am sure of is that SUP is here to stay. I’m feeling positive and excited about its continued growth and hope to be a part of continuing to move us forward!

To find out more and pre-order your 2020 Infinity SUP, visit www.infinity-sup.com