Mike Eisert, seasoned paddler with more than 30 years’ experience, created his own paddle academy a few years ago. Mike’s initiative may not be the first of its kind, but it is an exceptional one. Based in Dana Point, California’s very own SUP Mecca, Mike explains the goals and benefits of his paddle school and how it all works. 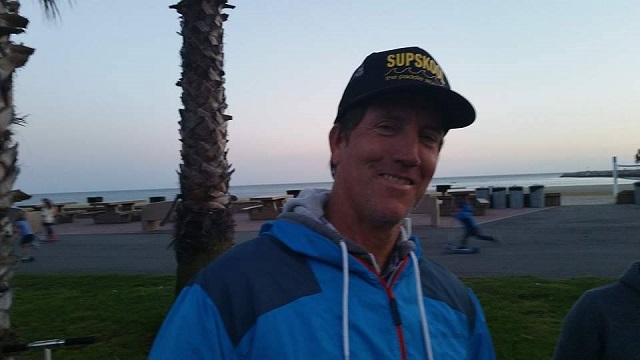 How old is The Paddle Academy, who started it and why?

The Paddle Academy (TPA) started approximately 5 years ago by myself (Mike) and Jaime Donnelly. The idea and goal was to create a Stand Up Paddle Junior Development Program with Long Term Athletic Development in mind just as other mainstream sports have done over the years.

Who is The Paddle Academy for? How often do you train?

TPA is for kids of all ages from 8 to 18, both boys and girls as well as for those that have never taken a stroke on a SUP Race Board….TPA is also for that Grom or Junior Athlete that has a passion for the Ocean, Surf, and the every day challenge of staying committed to the most basic goal of improving day by day and stroke by stroke…. We train 3-4 days per week on the water. Run at least 2 days a week, cross-train 2 days a week and of course race as often as possible. The younger Groms that are just starting out and under the age of 12 for the most part paddle and run 2 to 3 days per week. 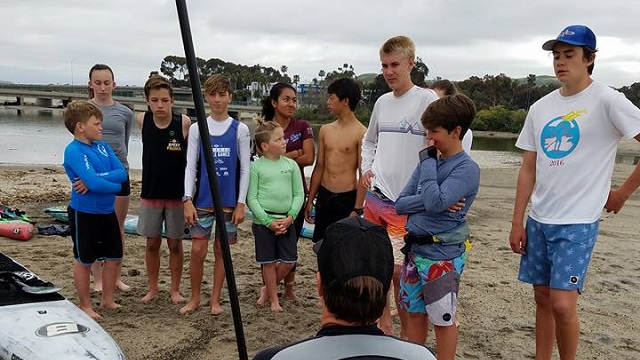 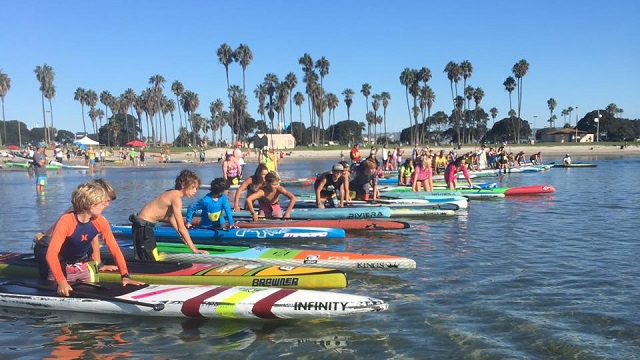 Can you talk about the community around TPA?

The paddling community in and around Dana Point is amazing. Literally this area has become the paddling hot spot in SoCal. All forms of paddle sports are prominent in and around Dana Point and what really stokes the fire is that the parents get it. They want their kids to participate in these types of LifeStyle Sports because they know these sports and activities stick with them throughout life unlike other mainstream sports where you only play them in High School and if very lucky then College.

How do you work with local structures?

The Paddle Academy is very fortunate to have a great working relationship with the California State Parks and Beaches at Doheny which has provided us to be able to train at perhaps the worlds most famous stretch of beach for Stand Up Paddle Racing. Home of the Battle of The Paddle and now Pacific Paddle Games. To have the biggest race of the year in our backyard at our home training grounds is just as big of advantage as living in Maui and have the Maliko Run at your doorstep. This has been lived out by the likes of Shae Foundy, Jade Howson, Erika Benitez, Tyler Bashor, Gavin Mencinski, Keagan Lamar and others who have been on the podium or in the top 5 in both the Junior and Pro Divisions. We have 10 and 12 year old kids that dream of racing as Pros at the Pacific Paddle Games and will do so by the time they are from 16 to 18 years of age….
TPA also works with all the local and private schools and school districts to assist our athletes in achieving Independent P.E. Credits which allows them to replace their physical education requirement at school with paddling and other related activities such as cross-training and running after school or spending a few extra morning fine tuning their speed with TPA Coaches in the mornings prior to major races… 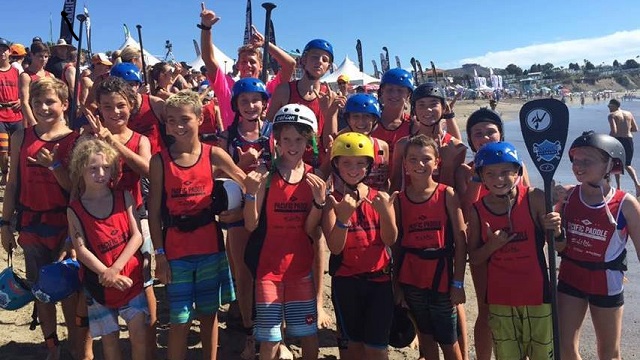 What is your paddle background?

I started paddling back in 1982/83 and did my first Molokai and Catalina crossing the same year. I was a 4 Year Varsity Oarsman rowing in College during the school year and racing outrigger canoes all Summer. Having the opportunity to race the Molokai Channel and for it to be one of your first major race experience turned me instantly into a downwind junkie. In addition to being a collegiate rower and outrigger paddler I was part of the first generation of paddlers that ushered in the OC-1 revolution and partnered with my good friend Johnny Puakea to become one of his first team riders during the early years of OC-1 racing. In addition to rowing, OC-6 and OC1 canoe racing I also was very active in Surf-Ski Kayak open ocean racing as well as Flat Water Olympic Sprint Kayak. To date, still my favorite paddle craft is the formula one of human powered craft in the ocean, surf-ski kayak… As well as being an experienced and accomplished paddler I have been coaching canoe and kayak my entire adult life at all levels. In all disciplines and at all levels I have been a State Champion, a National Champion and 2 time 3rd place finisher in the most prestigious distance race Molokai Hoe which is considered to be the Worlds Championship for Outrigger Canoe Paddling… 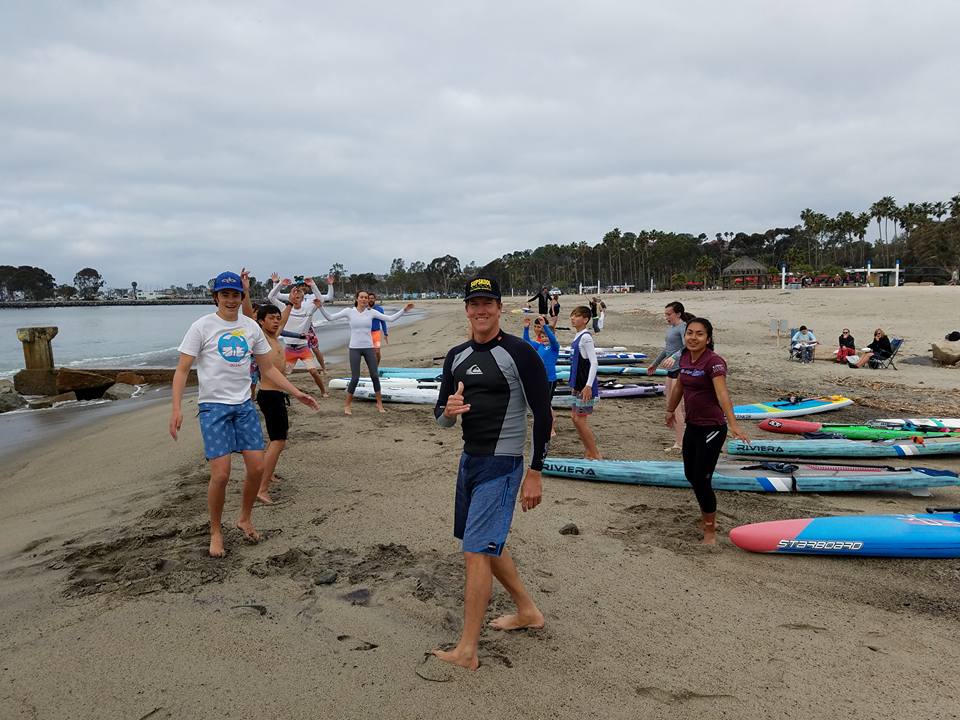 Can you introduce the people who help with coaching?

At The Paddle Academy we have been so fortunate to have such great Coaches join us along the way. Without exception, the addition of Greg Closier to The Paddle Academy this year has been nothing short of amazing. Greg has helped out both our top Juniors and our most beginner paddlers in ways that I could never. Greg’s wealth of experience as a competitor, an instructor and surfer along with his humble demeanor has been a huge influence We are also super lucky to have experienced parents who race SUP that help out with Coaching when needed as well as SUP athletes like Rob Rojas, Karl Ring, Jeremy Vaine, Brian Haag and others who have all contributed along the way. 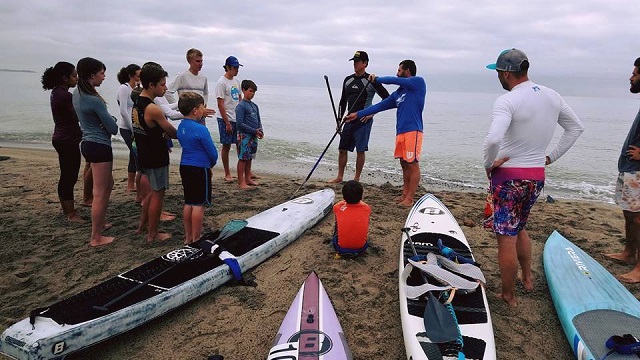 How much does TPA cost?

The cost to join TPA is just $325.00 per quarter. We have managed to make it very, very, very affordable to parents of all economic demographics. Obviously we are not in this to make a living at this point and I have a full time career on top of running and Coaching TPA. In time I am sure this fee will have to increase in order for us to bring on board additional coaching and other programming but those who started with us to make this awesome Program what it now is will always be grandfathered in at the fee the originally paid….

Can you name a few athletes who emerged out of TPA?

The athletes that have emerged to date are Shae Foudy, Erika Benitez, Jade Howson, Tyler Bashor, Elijah Schoenig, Nick Scheel, Daniel Russell, Max Fleming, Gavin Mencinski, Keagan Lamar and many. Many other Groms that always fill the podium at major Junior Event like the Pacific Paddling Games. Even more important than the obvious noted above the biggest names are those that have achieved success in a much bigger way through overcoming certain obstacles, showed continued improvement through consistent effort and now call themselves young water athletes and can race SUP with any adults in any conditions and have a blast doing it. 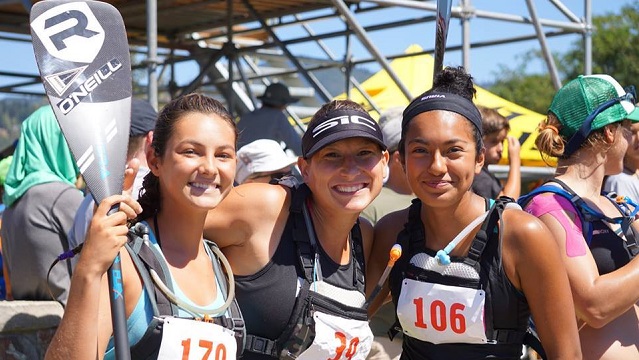 Who is to watch in 2017 from TPA and the coming years?

The obvious will be Jade Howson, Erika Benitez and possibly Shae Foudy as she is battling back from a chronic knee ailment. For the boys its Tyler Bashor, Elijah Schoenig and just a slew of 12 year old Groms such as Gavin Mencinski, Keagan Lamar and Zeke Rose….

What’s the future of TPA?

The future of TPA is bright…. We will continue to make our Doheny location the Center for Junior Excellence in SUP Paddling then look to create a more entry level program this Summer which will transition into a year round program thereafter. Greg Closier and I will launch the Program this Summer with 20 inflatible Race shape boards and paddles provided by SIC Maui. The goal is to fill the pipeline locally with athletes and have a means for which parents can more easily introduce their kids to SUP. The focus will be on Elementary School age kids. We continue to connect with paddlers and organization around the world regularly on how to start a program like ours and hope to continue to inspire as many organizations as possible to do what they can for the youth in sup paddling. We would like to take our model to other locations and are pursuing interests and connections that are promising. We have SUP camps in the works for Camp Pendleton Marine Corp Base in Oceanside, CA and other local locations in Dana Point Harbor and Long Beach with conversations underway in the San Diego region… 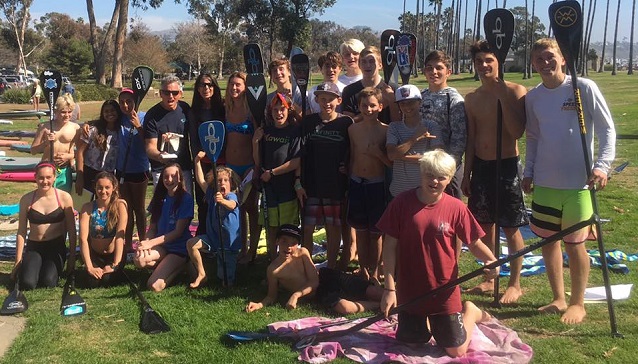