The action inside the Nautic Salon Nautique in Paris and on the River Seine was red hot this past weekend at the 2019 Nautic Paddle. The APP World Tour was in town for the Paris SUP Open, its final, climactic stop of the 2019 Season and the competition did not disappoint!

Seychelle wins her 1st APP World Title on Day 1 of the Paris SUP Open (as well as the Sprints, the Overall event and the Sprints World Title)

There were so many takeaways from Saturday’s action, from the electric atmosphere in the Salon, to some of the most exciting racing yet on the APP World Tour. But for one person, it was an incredibly special day, as not only did she power her way to victory in the sprint racing component against her friend-rival April Zilg of the Paris SUP Open in front of a mesmerized crowd, but she clinched the 2019 Racing World Title ahead of the Final day of action tomorrow.

That’s right, it was an emotional moment as one of America’s greatest paddling talents Seychelle was able to secure her maiden World Title here in Paris, with a flawless victory in today’s sprints, giving her three sprint wins for her first season on Tour, securing the 2019 Sprint Racing Title in the process.

In front of hundreds of passionate paddlers assembled here in Paris for this weekend’s race, Seychelle was thankful, proud of a moment that she has worked long and hard for and finally able to add a World Title to her list of achievements. 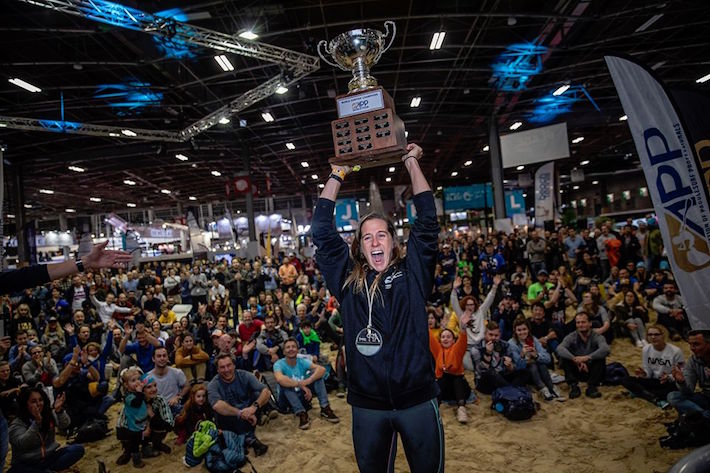 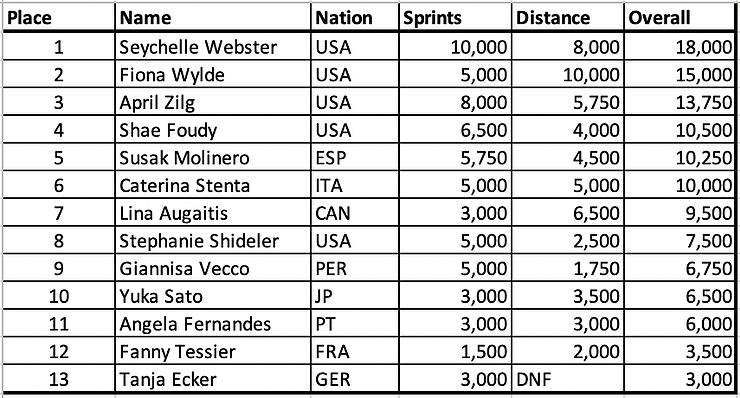 It’s official: Denmark’s Casper Steinfath has clinched his maiden World Title here in Paris amidst a raucous welcome on the riverbanks from a solid contingent of Danish fans. With a second place in the sprints on Day 1, it really came down to what 2018 World Champion Arthur Arutkin could do today, needing to win the distance in order to have a shot at the Title.

Unfortunately for the young French talent, a disappointing finish in the sprints yesterday led to a strong start in the distance today, as he stuck with the pack for the first half of the course, but seemed to hit a wall around the midway point, falling back in the race and out of contention for the 2019 World Title.

With that being the case, Casper Steinfath was able to finish his race on the river Seine in the knowledge that he is the all new 2019 Overall Racing World Champion: an incredible achievement to cap what has been an incredible year for the Dane. 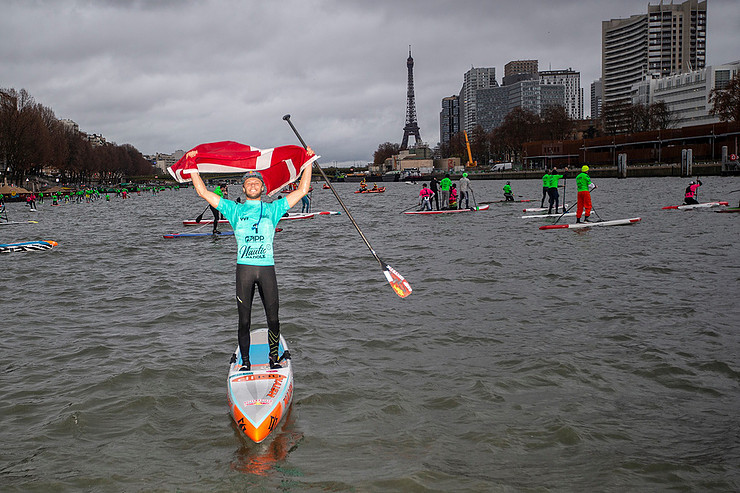 With 1,000 athletes taking off in the dark to paddle the iconic Nautic Paddle route west along the River Seine, Paris came alive for the final day of action at the Paris SUP Open, the climactic Final event of the 2019 APP World Tour.

Coming into the Final day, Arthur Arutkin from France and Casper Steinfath from Denmark were  both still in the running, with it would all come down to this final race of the season to decide World Championship Titles for 2019.

The start was impressive, like nothing we have ever seen before, with just under 1,000 paddlers gunning down the river Seine at day break accompanied by SUP Squatches (large inflatable multi-person boards) filled with excited paddlers in fancy dress, with music and even fireworks – it was a site to behold in every respect and a fitting backdrop for this all important final day of competition for 2019.

Out of the gate, a lead pack of 10 or so of the leading Men took control of the race, with Lincoln Dews, Michael Booth, Titouan Puyo and Connor Baxter heading up the lead pack, with the Title Contender Arthur Arutkin right on their heels. However, by the time that they rounded Notre Dame, Arthur had dropped back to around 10th, battling to keep up with the leaders, as the two Australians, Lincoln Dews and Michael Booth were starting to really take control of the Race.

By the Eiffel Tower, it was still Lincoln and Michael going stroke for stroke, following by Peru’s Itzel Delgado and Ludovic Teulade from France, with Titouan Puyo coming back into the mix into the final stretch.

But as the athletes accelerated for the last sprint into the finish, it was Michael Booth who had saved the best until last, just outrunning Lincoln Dews on the final stretch to secure the well deserved win.

This was Michael’s 3rd distance win of the season ouf of 4, firmly cementing himself as the most dominant distance paddler in the World and earning him the Distance Racing Title for 2019.

In addition to this, Michael was able to secure the overall event Title at the Paris SUP Open, his second of the season amidst a stacked field of the very best athletes in the World. 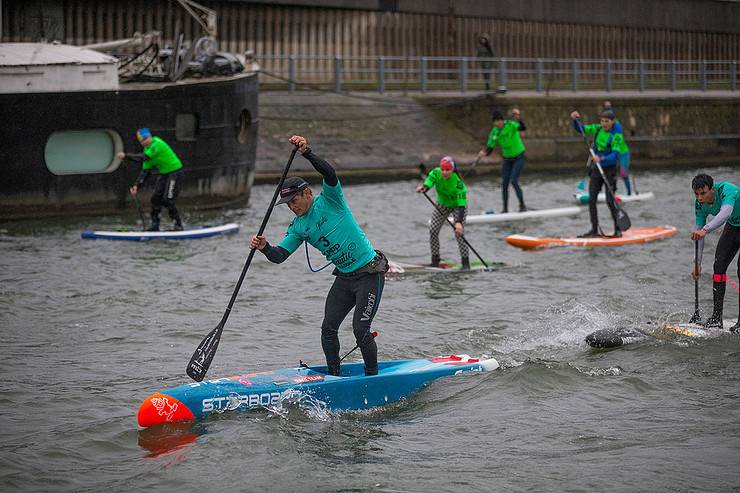 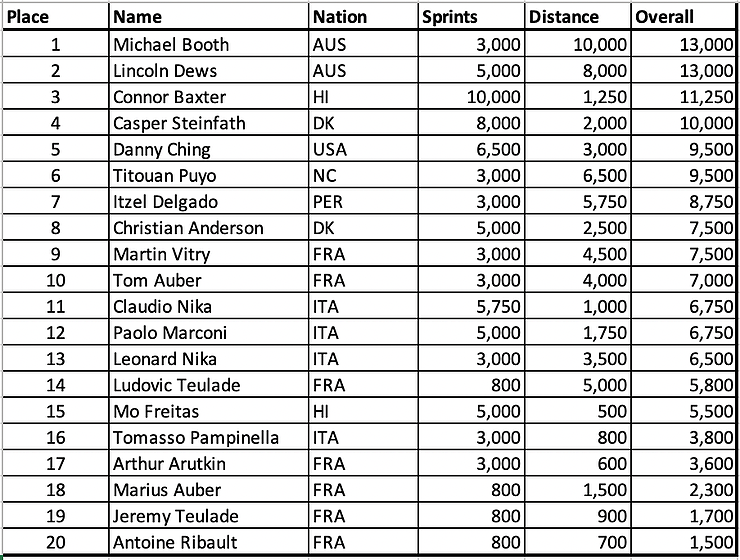 2016 World Champion Fiona Wylde has put together an impressively consistent season in 2019, with a couple of 2nds (New York and Osaka distance Races and a 3rd in London). However, until this final event in Paris, she had yet to secure a race victory amidst one of the most competitive Women fields ever on the APP World Tour.

Following a 5th place finish in the sprints, Fiona had her eyes set on the prize in what is one of the most iconic distance races in the World (alongside New York and London), biding her time to make a move, and working with the lead pack to stay in the mix and above all, in contention.

Coming into the final stretch past the Eiffel Tower, Fiona saw her window of opportunity, as she put her head down to power her way past Seychelle, Lina Augaitis and April Zilg to make it across the finish line in 1st.

It was a gutsy performance by the versatile talent from Hood River, Oregon, and one that saw her complete an impressive scorecard across the APP World Tour distance races, with a 1st, two 2nds and a 3rd, propelling her into 3rd place overall for the 2019 season.

Fiona will now be heading onto Las Palmas de Gran Canaria for the final stop of the APP World Surfing Tour to wrap what has been another impressive year. 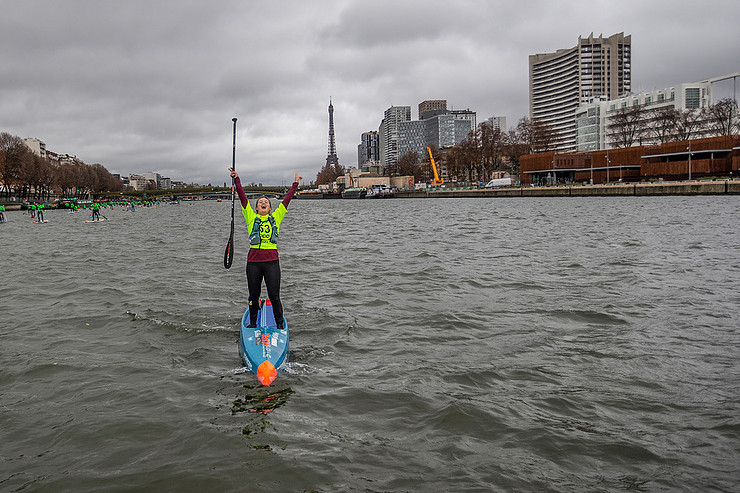 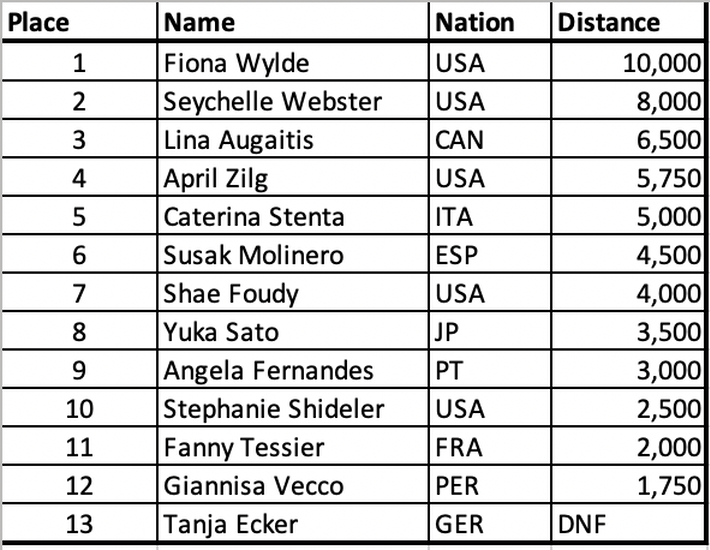 When looking at Connor Baxter’s incredible career, it is hard not to notice that his form through the 2019 season hasn’t been what we have come to expect from the multiple times World Champion. However, watching him take on the best of the best today and coming out with victory in the Sprints was a clear reminder that Connor is still very much at the top of his game and has a great deal more in the tank.

In a final that was without doubt one for the ages, Connor’s grit determination, physical ability and mental strength, enabled him to overcome Denmark’s Casper Steinfath to take victory, at a moment where Casper was one heat away from securing his first World Title. An incredible achievement by the celebrated Champion from Maui, who was setting his sights on the Paris SUP Open event title.

Connor’s sprint performance not only sets the scene for a strong finish to the season, but already bodes well for a great year ahead, as Connor makes a statement at this all important final stop for 2019. 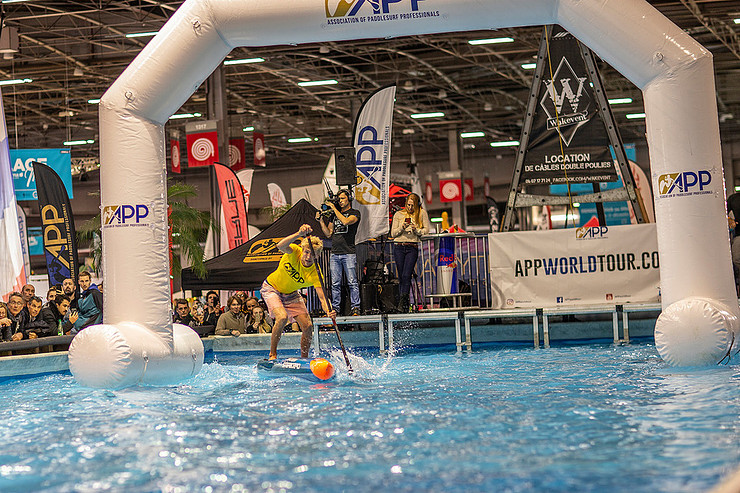 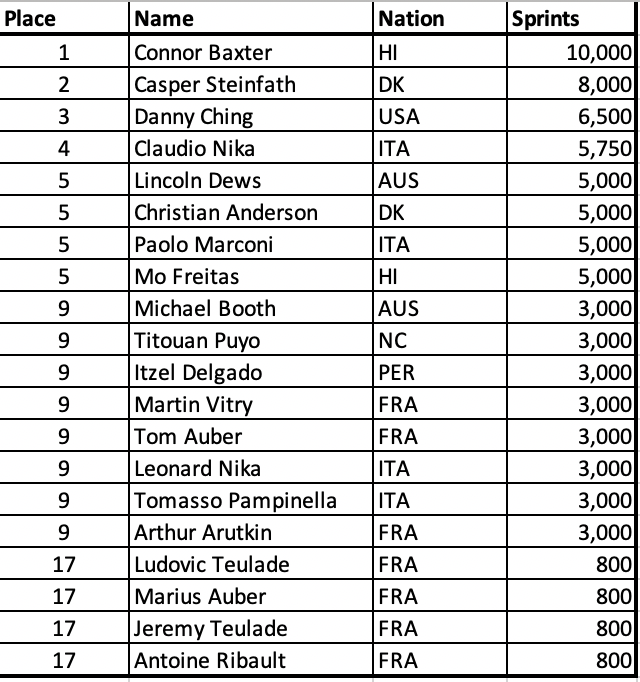