BARCELONA, SPAIN — TotalSUP met Pepe Oltra Sans, the Catalo-Menorquin rider. Last year the rookie fought hard in his first competition year and ranked 2nd in the UCS Catalán Circuit, 1st in the BIC SUP One Design, 1st at the Tarifa River SUP Race and 5th in the Spanish Championship in Galicia both in the Beach and the Long race… This year, backed by SIC, he is hungry for more and trains like a viking !

TOTALSUP : Hello Pepe, could you introduce yourself to the TotalSUP family ?
Hi, as I suppose this interview is about SUP, that’s where I’ll start ! I have been a SUP racer for a bit more than a year although I was introduced to the sport approximately 3 years ago through Gerard Alonso. We went to a SUP surf competition in Tarifa, I saw how much fun, complete and varied Stand Up Paddle was and I got hooked like for no other sport. No cars, no noise, you can come out when it is windy, when it is not, when the water is flat, choppy or when you have waves. Nothing to do with running, cycling, windsurfing or swimming (sports that I keep practising but as a training base for SUP now). Last year, I was on a Pepper 12´6 x 28 and this year with the help and support of Xavi Masdevall, I will compete under the SIC & Quickblade Paddles colours, brands that Xavi imports and represents in Spain through his company WindParadise ! 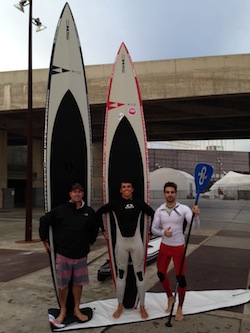 You recently received the visit of the SIC staff, can you tell us more about it ?
That’s correct ! We had the pleasure to get together with Livio Menelau and Brad Kingsley who had organised a European tour of their dealers before heading to Germany where they attented the ISPO show. We took them for a quick tour of Barcelona and didn’t have time for much more as they were on a tight schedule. Hopefully soon I’ll pay them a visit in Maui with WindParadise

Can you talk about your board and the SIC team members in Spain ?
The SIC MAUI X12 PRO is incredible. It’s a very fast and light board and the sensations I have had so far have been very good. I have to admit, I still have to adapt to the much narrower width (26″) than my last board and I still spend way too much time and energy focusing on keeping my balance. It’s a regular process though and I’m not overly worried. It’s still early in the season and soon enough I’ll be able to focus 100% on the stroke and the rythm, we’ll get there…
Regarding the team, we have the huge Spain’s champion, Laura Quetglas, as well as Víctor Blanes and we should hear about these two mallorquines more than ever this year. Let’s not forget Xavi Masdevall who has not retired yet, to say the least !

What presence does SIC have in Spain ?
This year we saw many SIC boards at various competitions, Downwinds and other get-togethers that were organized on the Costa Brava in the North-East of Spain. It is is a brand which should be much talked about in 2014. 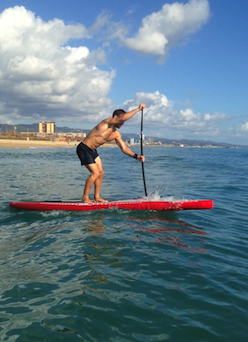 What are your ambitions for 2014 ?
Nothing set yet to be honest, I’ll do as well as I can, with what I have and wherever I can show up. Due to heavy work constraints, I can sometimes train at ill-timed schedules. Lately I have been on a good rythm though : I get into the swimming pool at 7.00 every day and swim 1000m, which helps me start the day with a burst of energy. About 3 days a week I paddle 6 kilometres in the sea annd I usually finish the day with a Crossfit or a Spinning session. The main intention is to have a good time and help as much as I can the brands that support me.

As for the calendar… the Mallorquines and myself are likely to take part in the first Brasil World Cup Series, some EUROSUPA races, the new Circuito SUP Race 2014 in Spain as well as the local UCS Catalán Circuit.

I would like to thank TotalSup for this interview opportunity and WindParadise, RailSaverPro, Mystic, Deep & Risk112.com for making this new SUP episode

We found this recent video of Pepe Oltra at the gym :