Five paddlers became the first to paddle the Croatian peninsula of Istria. Starboard paddle twins Mario and Manuel Stecher known as the “Stecher Twins” as well as three other paddlers Arnd Dünzinger from Germany, Andy Dressler from Canada and Peter Baricevic from Slovenia began paddling on 19th May in Barcola near Trieste, Croatia. 5 days later they completed the expedition covering 230 KM.  The Starboard paddlers were exhausted but overjoyed as they arrived in the harbour of Volosko near Opatija. Behind them were five days of paddling, at times over 10 hours in often adverse weather conditions.

The Istrian SUP Challenge started on the 19th May in Barcola near Trieste. From there, the five athletes paddled 56 KM in 10 hours to arrive north of Istria Novigrad. That days paddling took place under difficult and inclement weather conditions. The second day proved just as tough, with an extremely strong headwind they finally paddled into the “Red Island” behind Rovinji, the paddlers covered 37 KM. Day three was the hardest, the group were subjected to 12 hours of paddling, covering a distance of 51 KM. The final two days were simpler covering around 40 KM. On day 5 the paddlers reached port of Volosko near Opatija. The challenge was complete! 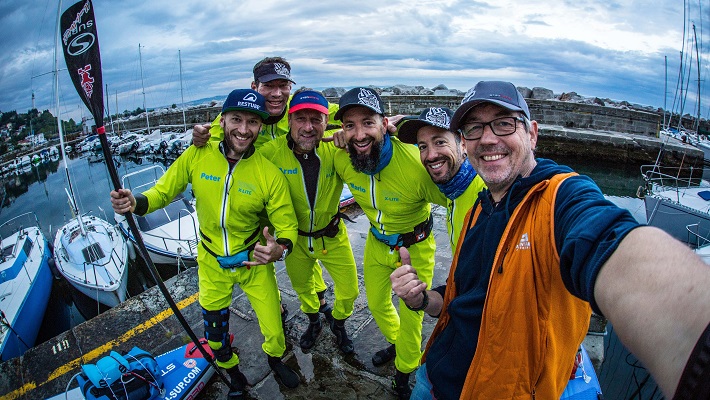 The enthusiasm of the athletes from 3 countries goes far beyond tackling a physical and mental extreme challenge. The five paddlers coped with the conditions as a fundraiser for the project “Rescue of the last Adriatic dolphins”. The Society for the Salvation of Dolphins e.V. (GRD) has been carrying out this species protection project together with veterinarians from the Faculty of Veterinary Medicine at the University of Zagreb for almost 20 years. “Our biggest concern is to reach the donation target of 5,000 euros for dolphin protection,” says Mario Stecher. The Starboard paddle twins talk to TotalSUP about their expedition, dolphins and cause behind their epic paddle!

Can you introduce yourselves and your paddle history? 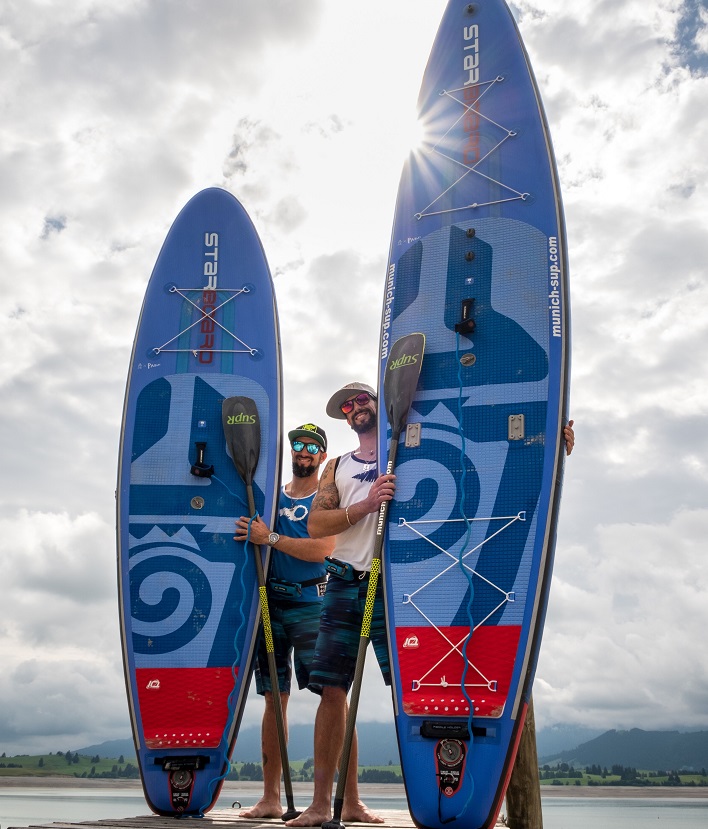 is Manuel Stecher, I am 36 years old, I started SUP back in 2014. I got involved through my brother who was SUPn for during rehab on his broken leg. Soon we started to take part in racing. But then we found our real love River SUP, especially in whitewater and also our Passion for SUP Expeditions.

MRS: My name is Mario Riedler-Stecher, I am 36 years old and I started SUP in 2013 during rehab on my broken leg. When I was no longer dependent on crutches I got involved in my first challenge. I did the first circumnavigation of Lake Constance in 2013. Before long, what I did just for rehab became a passion. In 2013 I paddled around the island of Koh Phanga, Thailand  with an 8’5 Wave SUP, this was just spontaneous inspiration.

Then in 2014 we paddle around of Lake Garda as a team. Then in 2015, we paddle around Lake Geneva, followed by a 300 KM paddle on the River Inn and then cycled our legendary Bike’n SUP Challenge at  home, a course that included paddling on 24 mountain lakes in 3 days. But my coronation was in 2015 when I won the  first German champion title in a whitewater SUP technical race.

In 2016, I wanted to understand the limits of my body better. So I paddled solo for about 37.5 hours without support around Lake Balaton. I paddled for 24.5 hours non-stop, slept 1.5 hours and then paddled for another 12 hours. Then in 2017 we had our Tara River project in Montenegro and now The Istrian SUP Challenge.

What motivated you all to take part in this journey, what was your link to the dolphins?

MS: Our father works as a Skipper on on yachts in Croatia, something he has done Since our childhood. So ever since our childhood we have spent most of our spare time and holidays on the Adriatic sea. Essentially we grew up on the water :). I also worked for 10 years as a skipper together with my father in the Adriatic sea. Many times during this period I got in touch with the beautiful dolphins which followed us a lot during our trips. So when we decided to do this paddle it was the best charity to choose because we will be paddling and sailing in their waters! 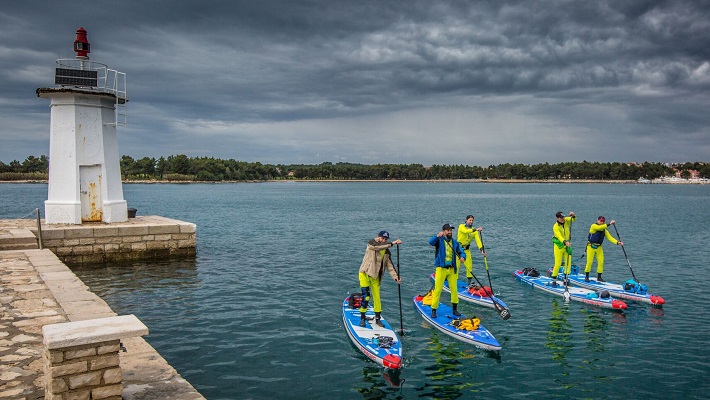 What was each of your roles in the expedition?

MRS: Mario was the head of the Project!! His areas covered ideas and logistic!  I am the one who is doing the media text and all reports after the trip. I had a shoulder surgery ( my third one) only 7 month before our challenge. So I was really busy with training to get back in my old shape or even better! 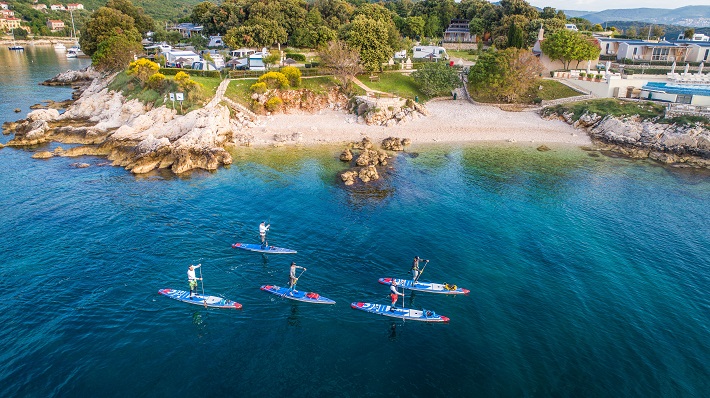 How long did it take to organise the logistics?

Mario: Not really one year 😉 It took about 6-8 months. But you need to know that we both have day jobs, two kids and a family which also takes up time!

What SUP equipment did you use, and why was this perfect for the expedition?

MS: We used the Starboard iSUP 14′ expedition 2019 model. We chose this because there was a lot of space for the equipment. They are also hard to damage and easy to transport. The iSUPs are ultra light, stable and fast! 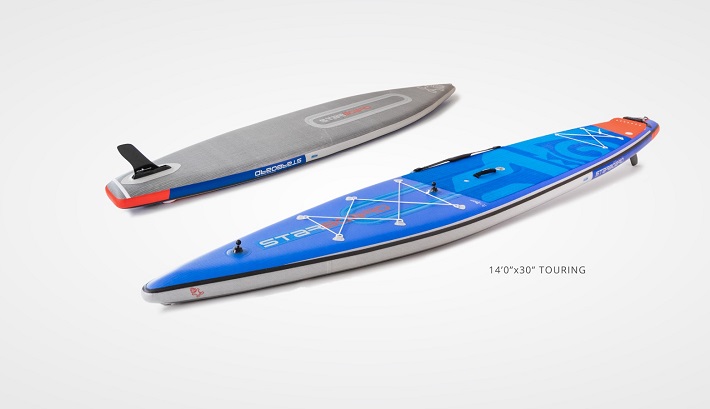 The others in the group paddled the 2020 prototype Tandem iSUP 16′ version from Starboard. This iSUP was strong enough to steer through choppy waters, but also long and wide enough to deliver enough control and stability. The tandem was great to use as the expedition donkey, so we could load up as much gear as much as we needed!

What was the most difficult parts of the expedition? 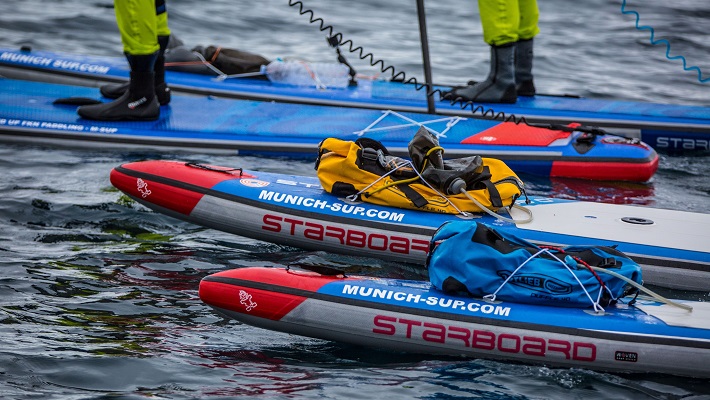 MS: Definitely the first 3 days! The weather was shitty to bad! 🙂 Lots of headwinds, side waves and strong chop!

It was also a mental challenge to paddle as a team. Through my shift work and family, I am usually alone in the morning to work out. As a result, I’m used to my personal pace and do not have to take anybody into consideration. On this trip, it was a team to paddle together and that’s what I did not find easy at the beginning, especially in the more difficult conditions. Now I am happy. We all learnt something in our challenge!.

The difficult weather conditions with lots of wind and plenty of waves was also a challenge. Only towards the end of our tour, the weather started to calm down, so at at least the last two days  we could paddle with significantly less wind and finally plenty of sunshine! 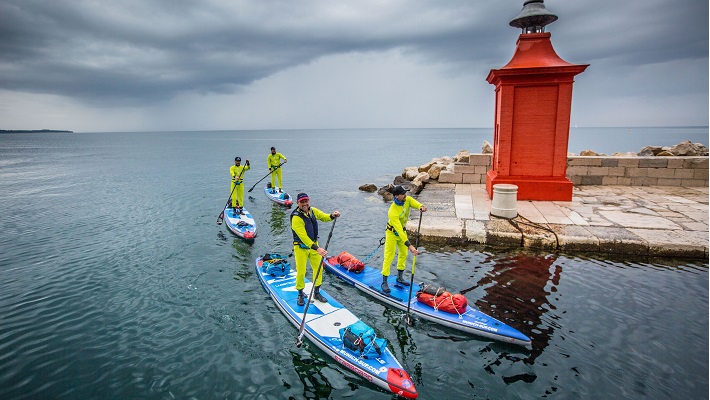 How did you get Sonni on board in designing the T shirt?

MS: Arnd Dünzinger and we, the “Stecher Twins”, are Starboard team riders. Sonny as a SUP pro and part of the Starboard Dreamteam is also from Germany. So our paths had already crossed many times. Sonny is really interested and also open minded when it comes to environmental protection. So Andy Klotz our photographer of the team just ask her to help us with a nice picture for our online shop and she just said yes 🙂

How can the readers get involved?

Everybody is able to donate something! Just click on the link and help us to protect the dolphins! Every Dollar or Euro counts! It doesn’t matter how much you donate! If everyone gives a little, it will be enough for the dolphins. For a change to buy one of Sonni’s t-shirts follow this link!