Last weekend the 30th March was 2nd edition of La Misteriosa SUP Pro and Amateur International Race was held. For the first time this race was part of the Eurotour SUP circuit as well as part of the Canarian SUP race  circuit, held and organised by Club La Misteriosa SUP, Gran Canaria together with the Council of Mogán. The location for the race was Las Marañuelas beach, located on the south Gran Canaria, with blue skies and perfect paddling conditions. Organiser Stano Hubacek from Club La Misteriosa  is on hand to give TotalSUP the low down of the competition!

It was all start at 8 am in the morning, we worked hard to be ready to receive all the racers. The  arrival of the first competitors created a buzz in the air and we could feel the excitement buidling . 9.15am prompt and we were ready to start with more than 60 registered competitors present. Ranging from the Canary Islands, Spain, Slovakia, Czech Republic, Germany, Italy, Hungary, Norway, Chile, Holland and France. A true international blend! 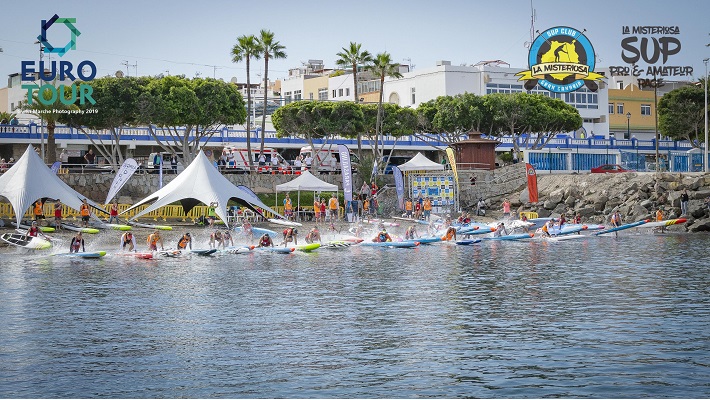 Probably for the first time in the history of the Eurotour and possibly all SUP races there were more women than men participating  in the Elite category. It is a  shame that we did not have the  chance to take a photo of all the female athletes together, it would have been a truly impressive sight!

The elite racers departed , they  would share the same 4 KM circuit as the sport racers, the route departing from Arguineguín then paddling along the  Mogán municipality coast to Barranco de la Verga and then back. The Sport paddlers completed a total of 8 KM (2 laps) with one beach run, whilst the elite paddlers paddled 16 KM (4 laps) with 3 beach runs. The first wave of elite racers appeared after 24 minutes, completing their first loop before dashing to the beach for their  first beach run at Marañuelas Beach, before heading off to complete the second 4 KM loop. The sport racers start was staggered 2 minutes later, with the amateurs, under 16 and under 14 paddlers starting at the same time (only one 3 KM loop of a slightly different course). 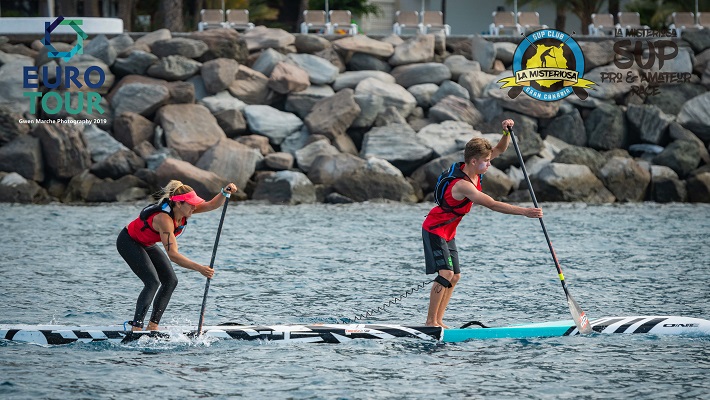 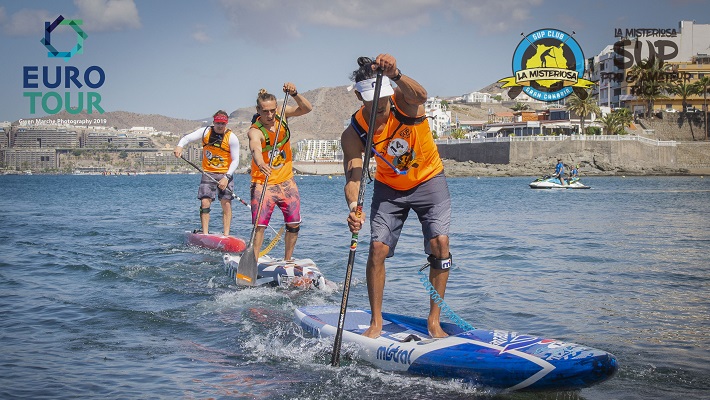 Martino Rogai commentated that ” La Misteriosa Sup Race has positively surprised me! It has been an amazing event as  has the organisation. Club La Misteriosa has totally respected the schedule and took care of all paddlers. I appreciated the technical 16 KM course with lots of buoy turns and the  intensive beach runs which made it more fun, also for the public who were watching the race. The big show was the sprint race with a combination of kids and experienced paddlers joining it. Arguineguin in Gran Canaria is definitely a perfect location for a competition. It is a great place for training during the year especially when in Europe is in the cold season. For sure, next year I would like to return for a few weeks before the race to enjoy the Island, and do some training, downwind and then the La Misteriosa Sup Race” 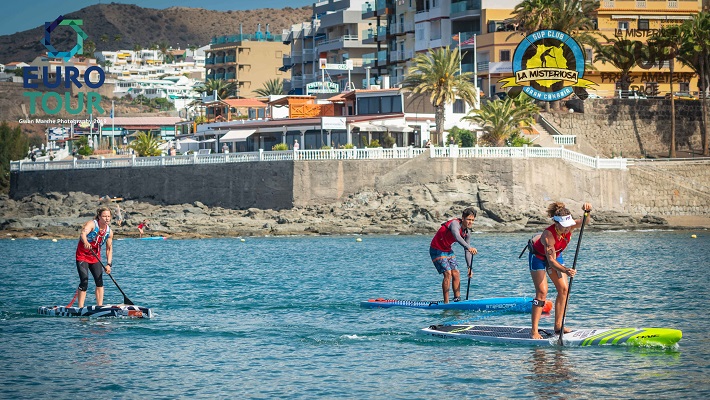 In the Female category, the Spanish paddler Susak Molinero from RRD repeated her victory from last year, with a time of 1:50:18. Behind her was Esperanza  Barrera, representing club Onexe on Fuerteventura, Esperanza claimed 2nd place with time of  1:50:33.  In third place was Dutch athlete Petronella Van Malsen completing the 16 KM in 1:57:18. 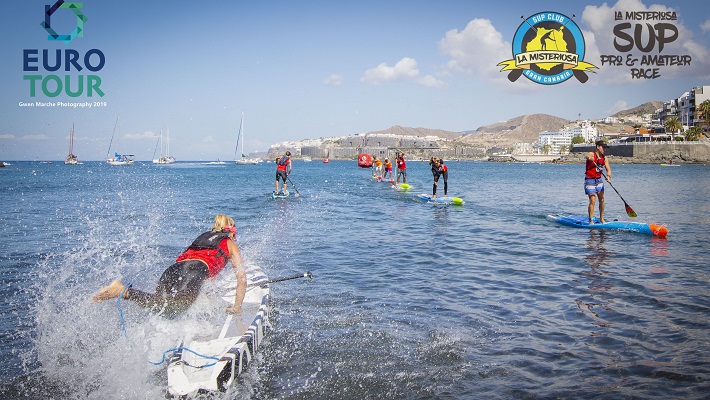 After lunch athletes then put on a performance demonstrating their powerful beach starts. Each of the racers had to perform a perfect beach start, paddle 100 Meters, make a perfect a buoy turn and return to the finishing line on the beach.
Young Czech Republic competitor Kristyna Babiankova put in a dominant performance in the womens category, with Italian athlete Chiara Nordio in second place and in a third place dash highly experienced Dutch racer Petronella Van del Maisen. Paolo Marconi dominated for the mens, with Fuerteventura native Jaran Rodriguez  in second position and third place was taken by Davide Iónico, a young Italian competitor. 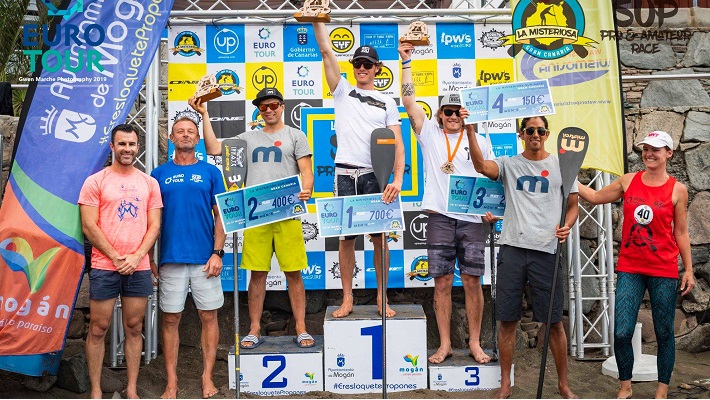 The days end was marked by the prize giving with €3200 price money distributed equally between the men and women racers , rewarding competitors up to 5th position.

In organising this epic event we would like to thank all partners, including Mogan Councill, Mapfre, Cardenas Real Estate, Ferreteria Tomas, Gloria Thalasso Hotels and our friends from In Your Face designs. A special thanks to Gwen Marche the photographer. See you all next year!