There is just under a week to go until the Paris SUP open, that is the final stop of the APP Tour. Tension is mounting between the athletes, as they build up to a dramatic close to the 2018 season.

The Paris SUP Open will also be a place of record setting in SUP history. Building on the legacy of the Nautic SUP Paris Crossing, the largest stand up paddle event in history at 700 paddlers, the APP World Tour hopes to set a NEW world record in 2018. The Tour is capping the 2018 event at 800 hardy paddlers who will brave the Paris cold weather in order be a part of this record breaking moment. With excitement surrounding this world record attempt, APP World Tour coordinators opened registration on September 15th (the date of the NY SUP Open Statue of Liberty race).  Due to an overload of clamouring paddlers, they used an open lottery system in order to welcome 800 paddlers to participate.

The Paris SUP Open, will be held in front of a global audience at the Nautic Salon Nautique of Paris, one of Europe’s premiere boat shows and promises to be an important demarcation in SUP racing history Never before has an event attempted to manage 800 participants, much less on the River Seine, a major waterway that runs through this iconic city. Racers will witness the Eiffel Tower from the water, paddle pass the Notre Dame and other historic landmarks.  It is an opportunity for men, women and children alike to participate in the something never done before in one of the world’s most beloved cities. 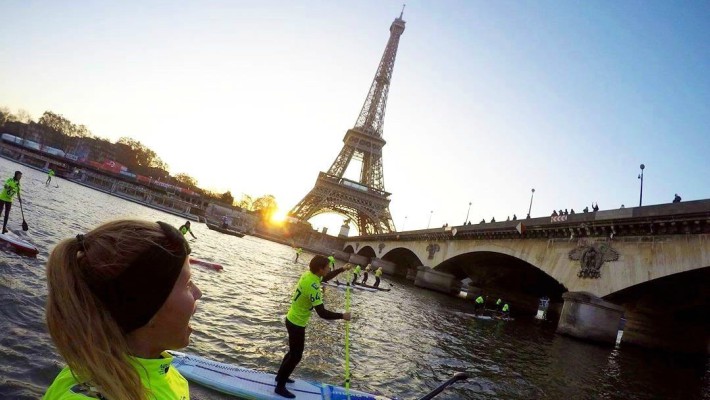 Also, all new for this event is a Man on Man format that is being introduced for the sprint component, which will take place in the heart of the world renowned, Salon Nautique, one of Europe’s leading Boat Shows. This third and final stop on the APP World Tour is a culmination of the year’s intense battles between top level athletes seeking a World Championship Title. 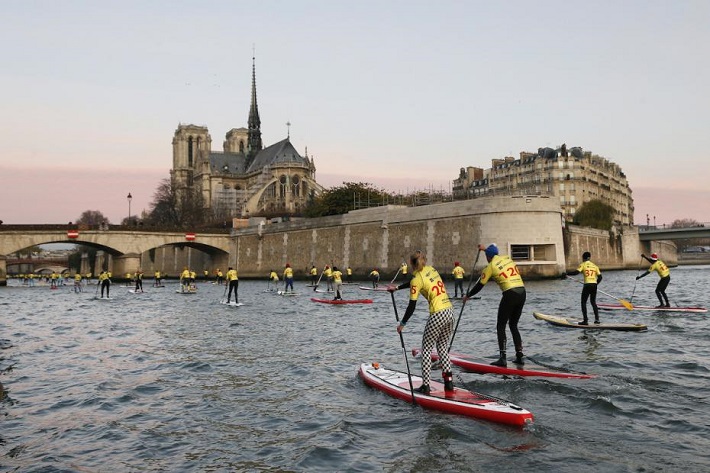 This format will feature fast paced 180 M long sprints, each consisting of 2 buoy turns through the early rounds, increasing to 240 M sprints for the final rounds, with 3 buoy turns, to add drama and excitement to the racing and determine the worthy Sprint Champion at the culmination of these action packed rounds of competition.  Wondering who is racing against who? Check out the schedule here! 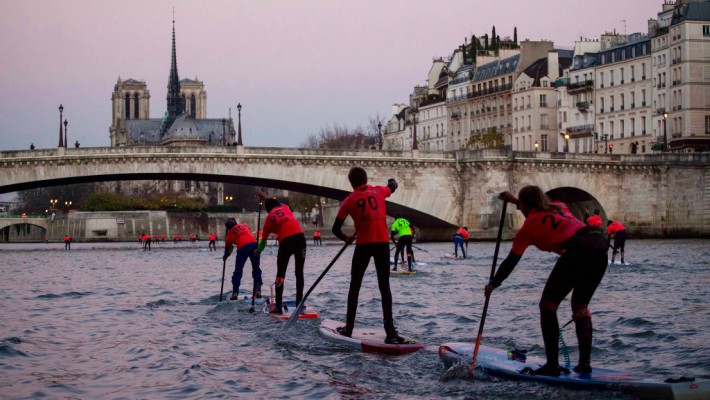 All the action will be broadcast LIVE from the show, so make sure to tune in and watch it all go down.  In addition to the mass participation paddle and the man on man spritns, the Paris SUP Open promises feasts of enjoyment for paddlers and non-paddlers alike at the Salon Nautique.  Meet pro racers Zane Schweitzer, Kai Lenny and Candice Appleby.  Witness the APP’s revolutionary new racing format:  SUP Sprint racing INDOORS as world title contenders battle in a new venue unleashed in Paris. 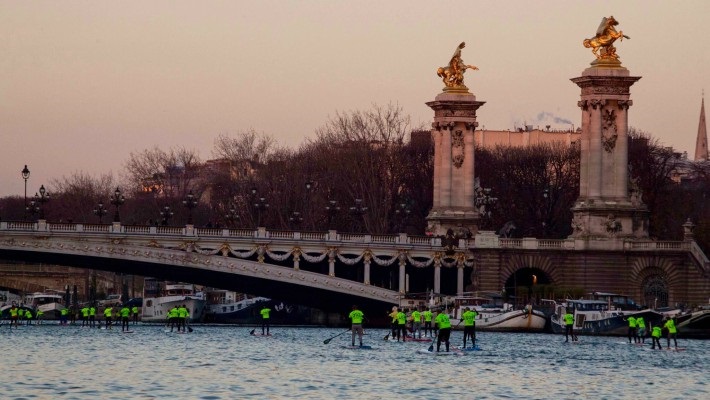 Join in the Welcome Event at the Salon Nautique to meet the World’s greatest championship paddlers including 2017 APP World Tour winner Connor Baxter, the fastest paddler on Earth.  Also present is the Danish Viking Casper Steinfath who is never far off the lead and a constant threat at every event.  Mo Freitas, the favorite young Hawaiian who excels in surf as well as on the race course will be there along with APP’s 2018 front runners Arthur Arutkin, Shae Foudy and Candice Appleby. Look for young guns Ryan Funk and Annie Reickert in the mix as well. Witness the final showdown for the World Championship Tour Sprint races INDOORS at the Salon Nautique where the Men’s and Women’s Sprint Champions will be crowned for 2018 Saturday afternoon. Stay for the World Record paddling event on Sunday hosted outside of the Salon Nautique.

Participate in the world’s largest stand up paddle race along the Seine River!  This record setting event will run in conjunction with the APP World Championship Pro distance race in the largest and most dramatic inclusive long distance race of the season to close out 2018! Afterwards, participants will enjoy lunch and celebrations back at the Salon Nautique. There will be afternoon Q&A’s with the Pros and non-stop demos in the indoor pool.

Saturday afternoon:  Take part in the historic moments of the APP World Championship Tour with podium crowning for  top Sprints and Distance racers as well as the much anticipated Overall 2018 Champions for both Men & Women in the Pro division! The APP World Tour honors the Parisian paddling community and the legacy of the Paris SUP Crossing by including a much celebrated awards ceremony for the main event!