Last November travel blogger Ciretta Wanderlust and Italian pro rider Giordano Bruno Capparella left Italy to go on an adventure in New Zealand. With breathtaking views, incredible SUP spots and charming cities, New Zealand is considered by many to be the most beautiful place on the planet. Whether you are a SUP lover or not, this travel report and pictures by Ciretta will leave you speechless. 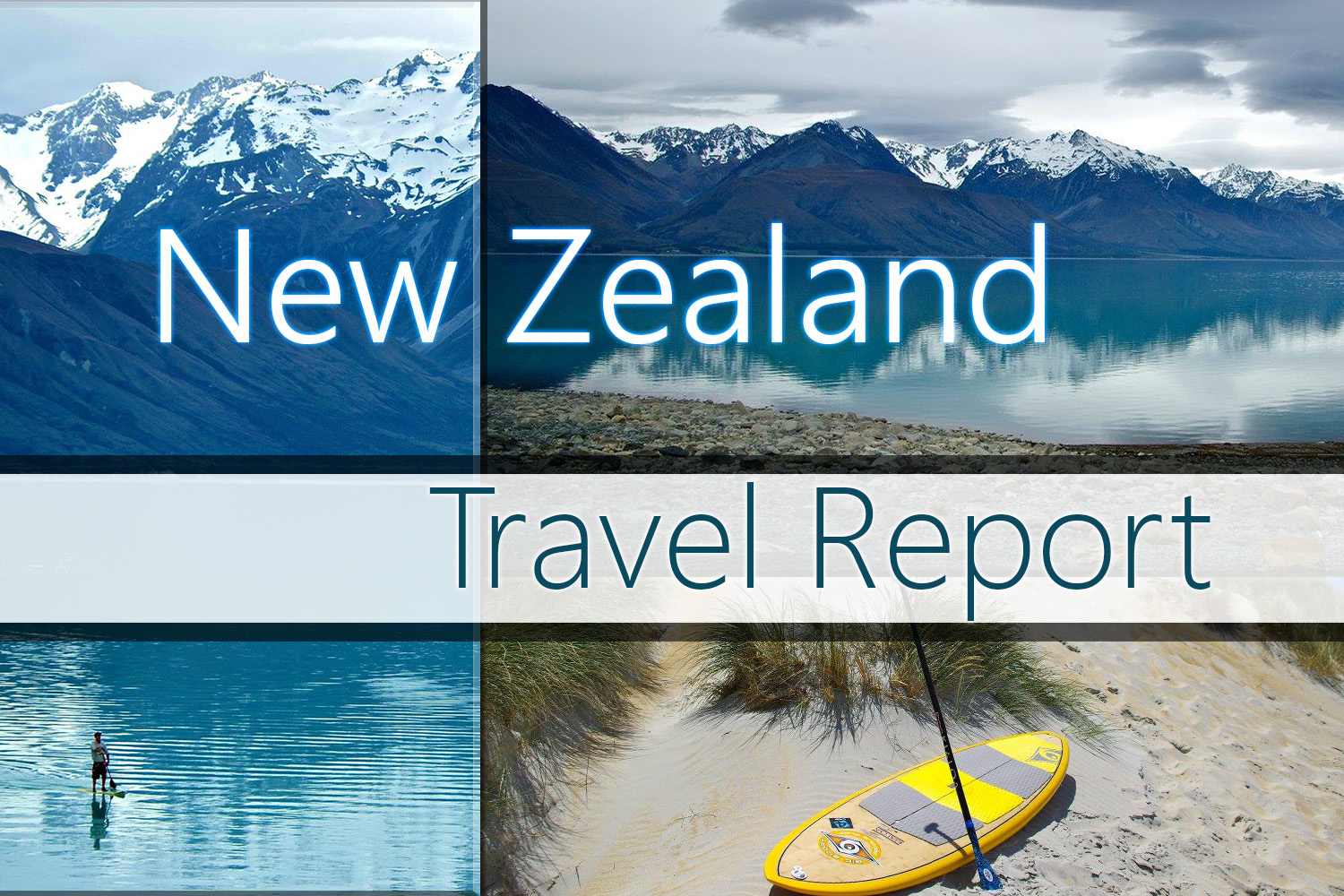 “New Zealand is one of those places that once visited will be difficult to forget.

Made up of countless rivers, snowcapped mountains, crystal clear lakes and picturesque landscapes New Zealand is a natural paradise, one of the most beautiful in the world, a magical land, immaculate, in which nature remains to be apprehended. Whether you are passionate about surfing, Sup, Kayaking, Rafting, Canoeing or more extreme sports such as Parachuting or Paragliding, New Zealand is the place to be.

My Journey started by leaving Rome on November 18. Two days later I arrived in Auckland. From the airport Giordano and I were on our way to Raglan, a quiet little seaside town 48 km away from Hamilton. When heading to the bay the green color started to surround us. With just enough time to eat some delicious fish and Chips we went to the Many Bay where we enjoyed a stunning panorama. 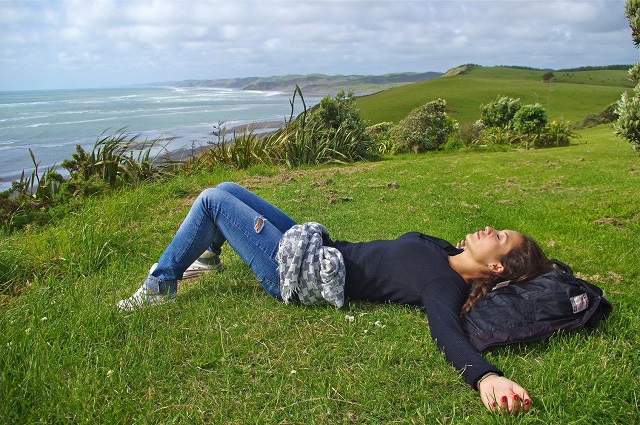 One day later we got to “the Point”. There the waves arrive with regularity, as if controlled by a precision instrument. We could see them breaking over 300 meters away from the shore. Giordano put his wetsuit on to have his first SUP session in the Sea of ​​Tasmania riding some high waves. Despite a nice weather on the way, everything changed during the first week. The water was freezing and the temperature did not invite to undo even the first coat button, let alone undress, put on a wetsuit and go paddle surfing. That’s when I understood and admired very much the passion of people who engage in this sport.

On the first day of the week we moved between the north and the south of the jagged coastline. That’s when we started to learn about the various spots and this is when I even had a first contact with those icy waters. We had a “travel plan” but we often changed it based on pieces of advice from the locals we met. This is how we reached the beautiful cliffs of Toto Gorge. We got there via a dirt road as the sun began to fall and the light of the sunset reflected on the sea.
As it so often happens while visiting New Zealand, it looked like a secret place…we were alone. The waves broke slowly in a continuous and relentless motion. 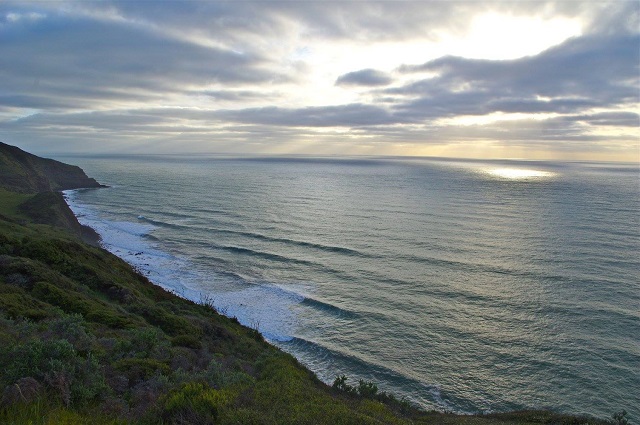 Later on we also pushed inland, visiting the beautiful Bridal Veil Falls. To reach these waterfalls we walked along a beautiful path in the wood full of surprises. The final surprise was the view from the top of the waterfall (55meters), which felt like a wonderful reward especially after climbing 200 steps from the bottom.

Now was the time to leave to discover the East Coast. In order to explore that area we rented a van in Raglan. The van was provided by PiwiWiwi Surf Campervan; I cannot recommend them enough.
The van had everything you need, a kitchenette, a living room turning in bedroom with a panoramic view and even a small bathroom. 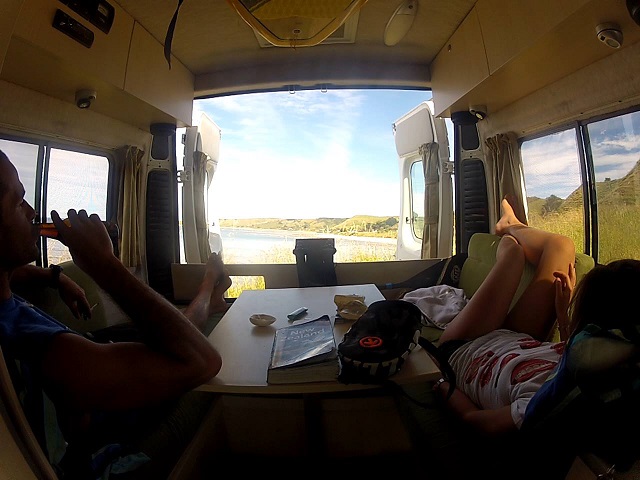 In this van we passed Hamilton to head to Rotorua, where our first stop was the Lake Okareka. We arrived at night in this little lake hidden from the rest of the world with no signal on our phones… In the morning we took the small trekking trail around the lake and got to see some amazing landscapes. Later on, we were on our way to Gisborne, we travelled 300 km by cutting the island from west to east until reaching the coast. This is where we had our first view of the ocean. We were now more than 400 km away from our starting point! We were amazed by the climate change. Gisborne is a small town located in Poverty Bay, very commercial, full of shops and quite chaotic. That was almost a shock after 24 hours spent in close contact with nature. However, we decided to get settled there for a few days to visit the beautiful beaches and coasts and to find a few waves. We visited different spots and Giordano managed to do a couple of SUP sessions, enjoying the waves along the Pacific coast, this time wearing a wetsuit.

We continued our trip down to the south, visiting the Mahia Penisula, a virtually uninhabited peninsula, with more cows, Caribbean beaches, crystal clear waters and sheep than humans. We then headed to Napier in Hawke’s Bay, where we stayed overnight, before having a rest in the hinterland close to Raglan, passing the Lake Taupo. The latter is a volcanic lake, the largest freshwater lake in Oceania. That night we slept on the banks of the Waikato River, the main outlet of the lake. 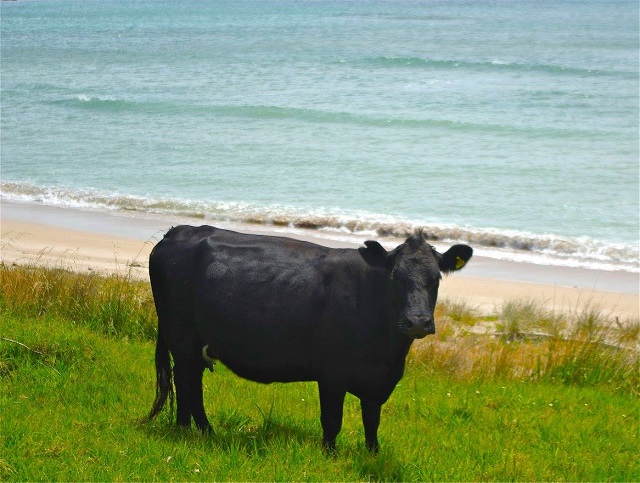 On December 1 we were back to Raglan. There, we prerared to leave for the South Island, which has less than one million inhabitants but a lot beautiful natural landscapes which were used in several films such as “The Lord of the Rings”. After more than 7 hours of driving we finally reached the southern tip of the Northern Island, where Wellington is located. We were only there for a night in a hostel. It’s a lively city that is definitely worth visiting. The next day from the port of Wellington, we embarked on the Interisland, to reach Picton on the southern island. The trip in the fjords leading to the port of Picton, accompanied by some Royal Albatross still gives me the chills. Getting off the ferry we could already see in the distance the snowy peaks of the Southern Alps dominated by the Mount Cook with its height of 3,754 meters above sea level. To start our journey we planned to descend on the east coast of the island, stop at the Kaikoura district, and then continue along the west coast along the mountain ranges to meet along the way many alpine lakes until reaching our destination in Queenstown. The southern island is certainly a lot less green, the vegetation changes completely and the thing that is breathtaking is that you can see the horizon without finding any sign of man for endless kilometers.
On the way to Kaikoura, I saw dolphins and seals jumping out of the water and enjoying freedom. The village of Kaikoura itself looked like a typical fishing village, existing in peace and absolute silence. We stopped there for lunch and to have a few drinks. We then left towards the hinterland to discover the alpine lakes. There we first saw the Lake Tekapo, a lake of incredible colors where lies the picturesque little church of the Good Shepard. There I saw the most amazing flower that I had ever seen, the Lupinus, creating variety of unique colors. Later on, we went to see the Lake Pukaki. We reached this lake after walking several km on a dirt road. Mount Cook stood before us with its impressive glacier. Giordano paddling on his SUP was distorting the reflections in the water. At that time, we did not exist, we were merely silent observers. 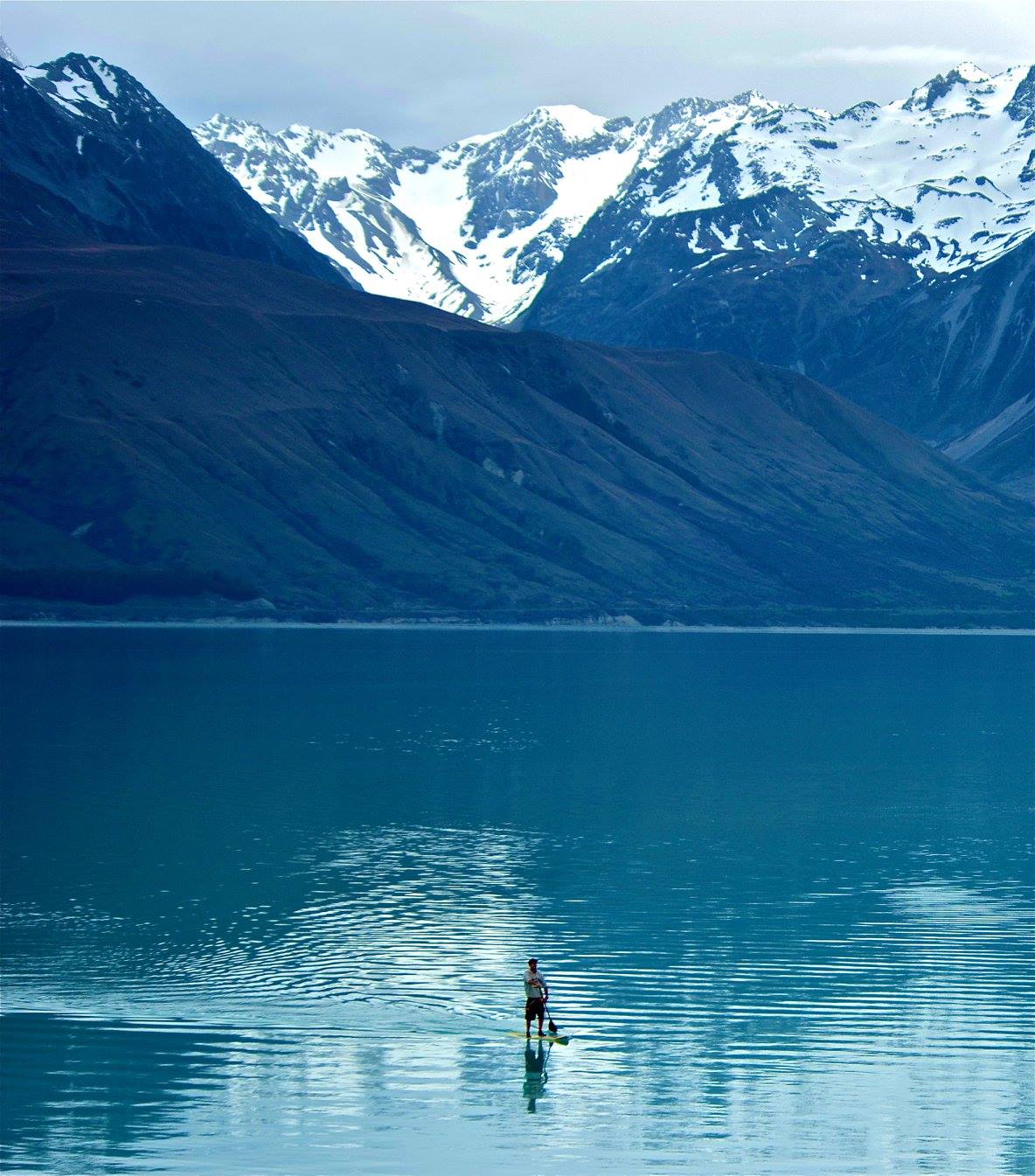 At sunset, we reached the Lake Wanaka, where we stopped for the night. The next day we left early in the morning for a trek that took us up to 1,500 meters above sea level, from this height we could enjoy the beautiful view of the lake Sottostate. During this climb, halfway through, I stopped and told myself: “I’ll never make it”. During the hours we spent walking, I felt my legs were giving up on me several times and I must say that if it were not for Giordano to motivate and stimulate me, I’d probably still be there whining. Pushing beyond your limits is something extraordinary. There was nothing more rewarding in the world than reaching the top of this mountains and admiring the wonderful landscape beneath me. Tiredness gave way to emotion and I almost cried of joy. During the descent, after finishing our reserve of water (we were not very prepared) we found at high altitude a stream that flowed down the rocks. It was like an oasis in the desert, and I can assure you that once you taste the purity that nature has to offer you cannot live without it. I never bought another bottle of water in New Zealand after that. 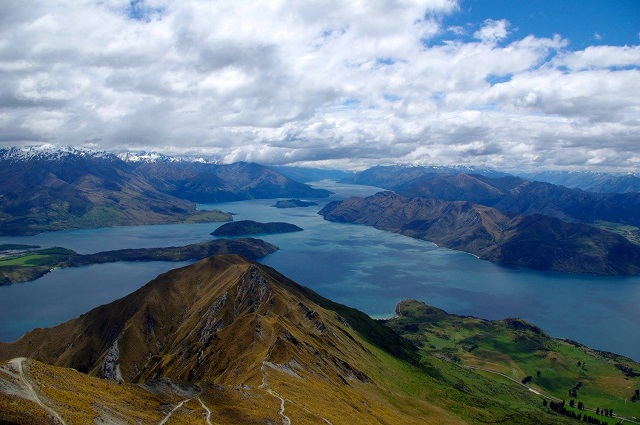 After this fantastic experience, we left Wanaka to continue our journey. On the shores of the Lake Wakatipu, in the region of Otago hidden by towering mountains lies a city called Queenstown. This is where we decided to spend the final days of our trip in the south. Queenstown is a capital of entertainment, a city known by many for the opportunity to practice extreme sports. The city is quite small but there is an international airport. Imagine the influx of tourists who decide to visit it from all over the world! Queenstown is ready to meet any need in fact can find a myriad of sports shops there. We spent ten days in Queenstown and those were ten amazing days !
Everything around was to explore. We rented mountain bikes and pedaled on extreme paths for several kilometers. We reached unexplored points and walked for hours along the high altitude trekking trails. We loaded the Sup in the car and paddled up on the crystal clear water of the Lake Wakatipu to discover, one by one, every single one of its wonderful islands. On the evening, we returned to the house exhausted, but still ready to go on a new adventure. After a little less than two weeks, we reluctantly left Queenstown and decided to stay a few more days in the Otago region. 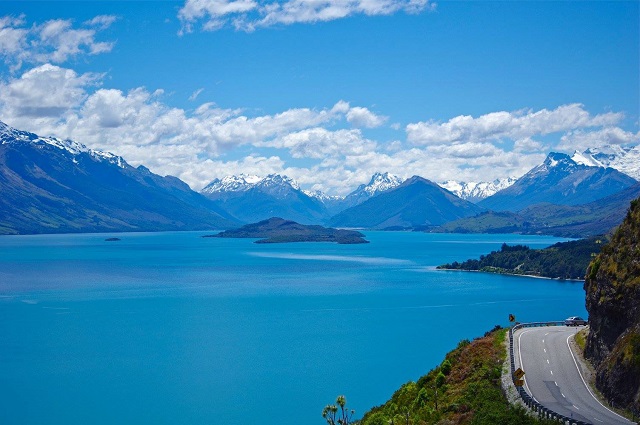 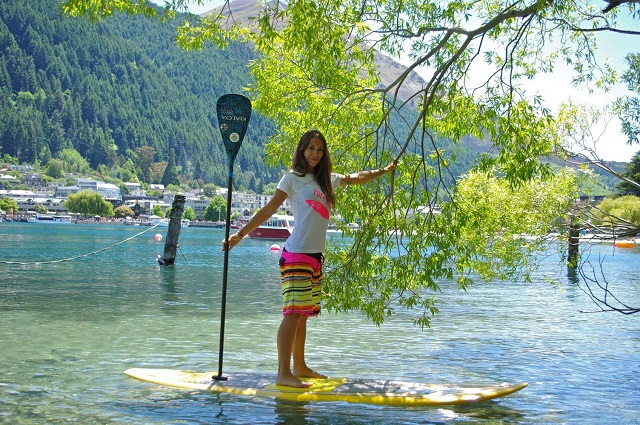 We stopped by Dunedin and arrived at the peninsula, where Giordano surfed and rode the big and long waves typical of this place. Still going up along the coast (always looking for waves) we stopped at Christchurch, an incredible city that still bears the scars of the 2011 earthquake. We then went to Picton and finally we headed to the north were Giordano was able to do several SUP sessions between The Oka Bay and Taylors Mistake. During our trip to the south we covered a total of more than 2500 kilometers.

We spent the last two days of our holiday in Auckland a metropolitan city of more than 1.4 million inhabitants. There lies one of the most picturesque port in the world, a beautiful bridge and the fantastic Sky Tower. This city is built on volcanic hills so we decided to pay a visit to the extinct volcano One Tree Hill which gave us a breathtaking view on the ocean. For art lovers, there is a beautiful and ultra-modern Art Gallery. But we didn’t stop there and decided to have one last coast to coast trip. We traveled 16 km on foot, walking from the shores of the Tasman Sea, up to those bordering the Pacific Ocean to get one last look at the wonders New Zealand has to offer…”

Video of the trip:

What to see: in each city there is a tourist information point, where you will find answers to all your questions.

To sleep: New Zealand is full of Motel Accommodation / Hostels for Backpackers, ambien online, there’s no need to go crazy with thousand of reservations online, just keep your eyes open to spot them.

If you want to know more about Ciretta Wanderlust visit her facebook page : https://www.facebook.com/CirettaWanderlust/
You can also find her blog (IT) at : http://cirettawanderlust.blogspot.com

You can find an article about Giordano Capparella here : https://www.totalsup.com/en/articles/item/581