Last Saturday, Wrightsville Beach was the theater of the first big international SUP Racing event of the year : The 2016 West Marine Carolina Cup presented by Surftech. The race didn’t disappoint with more than 600 paddlers enjoying the different races including 162 racers competing at the now legendary Graveyard Race.
What a great season’s start ! This is the kind of event that really puts you into the racing season, with the world’s best paddlers heading to this North Carolina town for the love or their sport, hundreds of spectators cheering throughout the races, women riders charging their way into the waves, and most of all, seeing everybody pushing their own limits. Visit best reliable online pharmacy http://www.healthcarewell.com/online-pharmacy/. What an inspiration! That’s what I love about SUP racing in the USA, everybody on the beach is clearly living an exciting moment and for the time of a week-end, we all belong to the tight-knit SUP family.
A lot of things happened this week-end and I could talk about it for hours but I will make it shorter for you: here is my 2016 Carolina Cup inside coverage in 9 points.
1. Titouan (Ti2) Puyo’s domination over the world’s best
Titouan’s victory on Saturday means a lot for the start of this racing season, especially after a race like that where there is little place for the luck factor. The Frenchman just realized a perfect start of his 2016 campaign and if he is too humble to say it, his result clearly says : “this is my year, and this is just the beginning”.
Titouan told me after his victory : ‘this is the American Dream, it means a lot to me because I really wanted to win one of these big American races, I didn’t get the results I was looking for at the PPGs and other races so winning the Carolina Cup with such a stacked field of racers is something big for me” Titouan made his move when Travis, Danny and him broke up broke up from the group on the last leg and then nobody was able to catch him up. 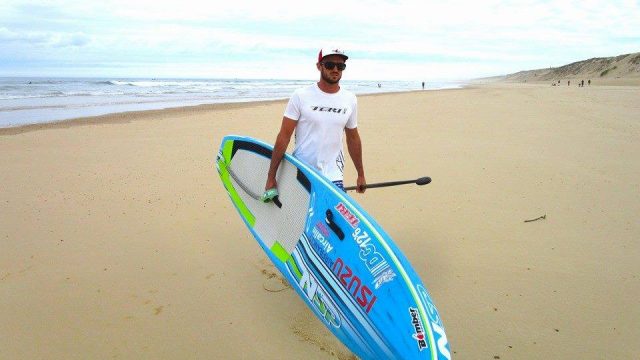 2. Annabel Anderson claims a 4th Carolina Cup victory !
Annabel looked unstoppable during this race, she broke up from the women’s pack 3 miles after the start and never looked behind her until the finish line. 5 minutes behind her are Candice Appleby, Sonni Honscheid, Fiona Wylde and Terrene Black.  They all took turn to head the chase behind Annabel but in the end Candice was the strongest to claim a second place finish while Sonni outsprinted Fiona and Terrene on the beach to finish 3rd.

3. A huge result for the NSP-Quickblade combo
Titouan’s first place and Travis’s second place are not only big results for them, it’s a big success for the NSP-QuickBlade combo. It looks like NSP and Quickblade made a very smart move getting Titouan in their team along Travis. I know that they spent some time training together this winter, especially for Titouan to get used to his new boards, so we should keep an eye on this duo for the rest of the season after this hugely succesful start.

4. The dark horses showed up in the front pack
As I said in my pre-race report, the field of racers gets more and more stacked every year with young guns and dark horses hungry for good results. I’ve been competing for a while now but I still have this feeling that I want to prove myself against the world’s best and I think being a dark horse is all about that. I didn’t get the results I was looking for but some of the 16 paddlers to watch in 2016 made some big upsets on this Graveyard Race. On the men’s side we have 4th place finisher Trevor Tunnington (aka ‘the fastest paddler on earth’), 10th place finisher Matt Notage, 11th place finisher Daniel Hasulyo, 13th place finisher Giorgio Gomez. On the women’s side, the big names make up the top 5 but it looks like 6th place finisher Shae Foudy is heading a new wave of talented girls like 14 year old Lexi Alston (11th) and Erika Benitez (12th). I had the opportunity to talk with Danny Ching after the race and he told me ‘this year is gonna be insane, a lot of new faces in the main top pack and nobody can get away from it, the pack is too strong’.
5. The start of the Graveyard race
The start of the Graveyard Race was for sure an interesting moment, basically we were 162 paddlers trying to make our way through a fairly big shorebreak with our 14′ boards. Actually for those who know me, I really enjoy this kind of situation because it’s a lot of fun but anyway, it wasn’t obviously that important to take a good start, the best example are Titouan and Danny who were not in a very good position at the first buoy but they made their way back to the top spots pretty easily after that. The only thing that really bothered me is that the women and men started at the same time and I feel like it’s not fair for the women because they deserve to have their own start as long as it’s a different race with no drafting between men and women, it should always be separated. 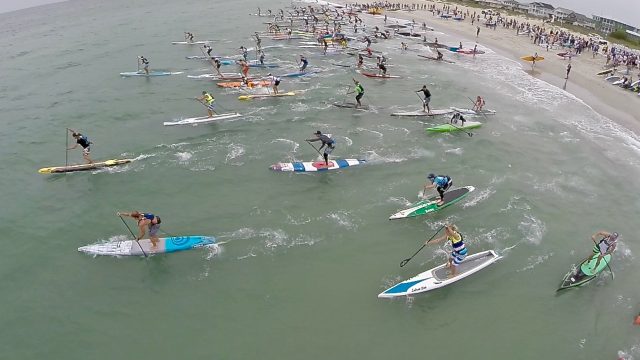 The racing conditions were pretty tough with some up-current and up-wind parts, but the waves at the start, the finish and especially in the inlet channel made the race very fun. It’s a very interesting race because it’s always different, you start in the ocean, then you surf a wave to the inland, then you are up or down current depending on the sides, and then you finally go back to the ocean for a very tiring upwind leg until you take a wave that will bring you to the finish line. I had a feeling that the race would be very repetitive with 95% of flat-water but it wasn’t. The conditions here in North Carolina in this special place of Wrightsville Beach are definitely interesting and the race happened to be a beautiful example of what our sport can be about.

7. Zane Schzweitzer as the announcer

2016 Ultimate Waterman champion Zane Schweitzer chose not to race last week-end but far from missing the action, he went at the Carolina Cup as the commentator on the beach and made a very good job keeping everybody entertained, he did probably a big part of making such a good atmosphere on the beach on Saturday. Zane is definitely one of these guys who are stoked about sharing their passion about the ocean and our sport.

8. Lina Augaitis is back
After giving birth to her baby only 3 months ago, Lina has already made her return to racing and claimed an impressive 7th place finish on the women’s graveyard race. Keep on eye on her for the rest of the season as she will probably try to reach the top 3 spot from last year in the world rankings. 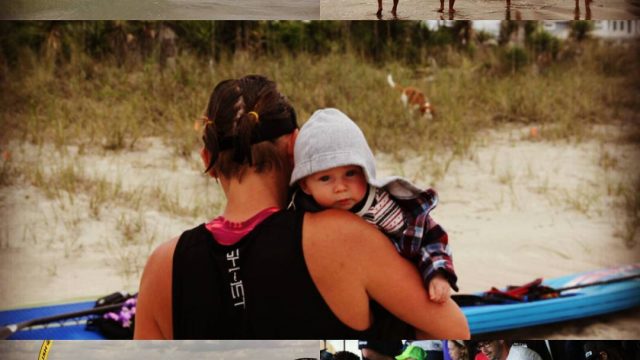 9.  TotalSUPing and racing
My internship with TotalSUP has officially started on Wednesday and after these first few days I realize how lucky I am to be able to mix both my passion for racing with my work ambitions.
I arrived in Wrightsville Beach expecting to start the season well and an 18th place is not really the result I was looking for but I couldn’t ask for a better experience to start the year, really. This race was for sure the toughest one I’ve ever done and even though I broke down in the last 2-3miles, the winter training seemed to have paid off for the first 10 miles. I had the opportunity to lead the race for a few minutes in the inland and it actually felt very good, so I hope that it built up my confidence for the next races. I’m looking forward to a very exciting schedule this year and reporting about every event I’m racing at is a very interesting way to understand how all of this works. 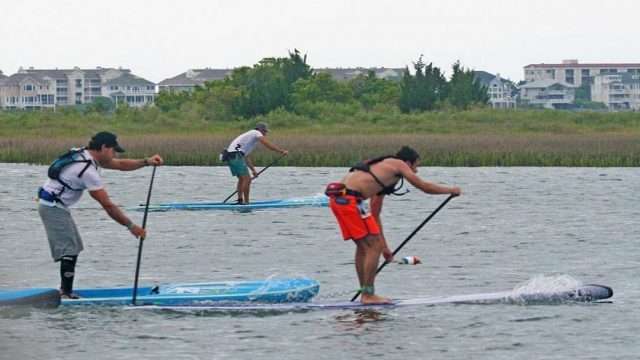