The EURO TOUR, the circuit that unifies the big european races for 14 weeks of competition on 14′ SUP race boards stopped in Porec, Croatia this week-end for its 7th stop on the beautiful Adriatic Sea. 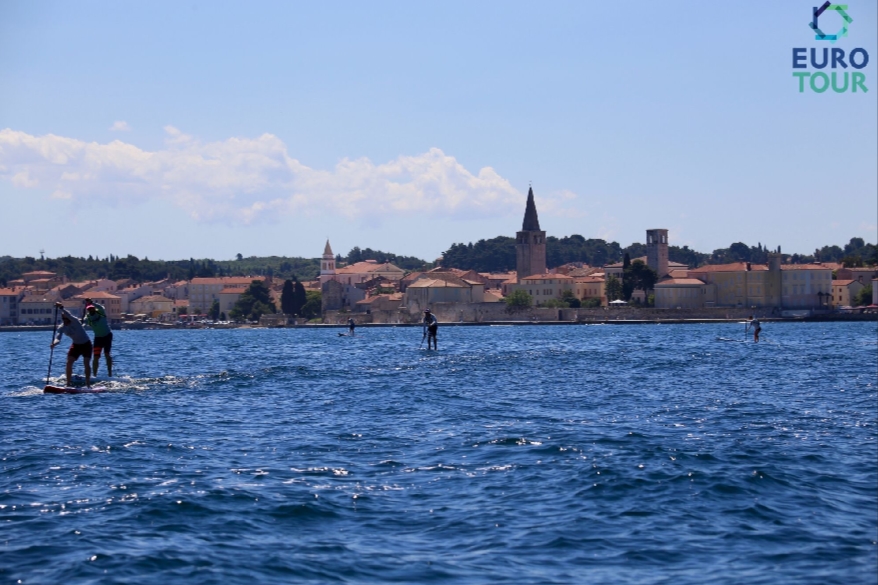 Saturday was the big day of competition with the 14′ Elite Distance Race (14km), the amateur races and some exciting leisure SUP events (Big SUP + Aquapark run, SUP-Polo..) on the event site of Valamar Tamaris in Lanterna, which is a big holiday resort and your dreamy destination for a race. 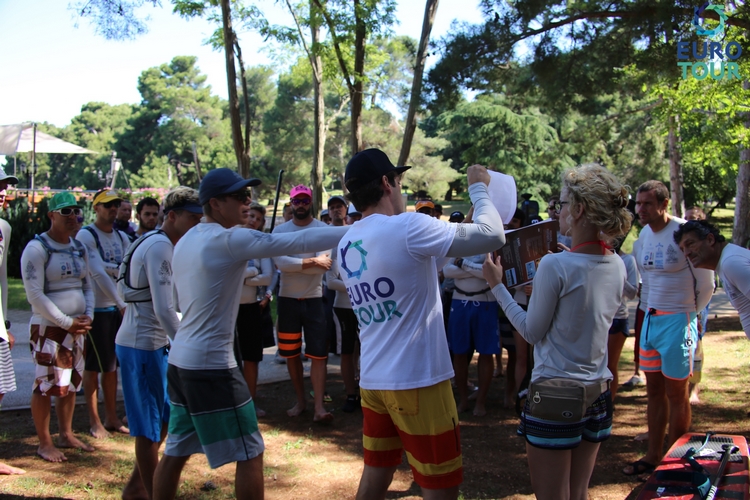 On the Elite Race, with the presence of Connor Baxter, Michael Booth, Jake Jensen, Davide Ionico and the Hasulyo brothers, everything was set up for some intense battles for the podium places once again. 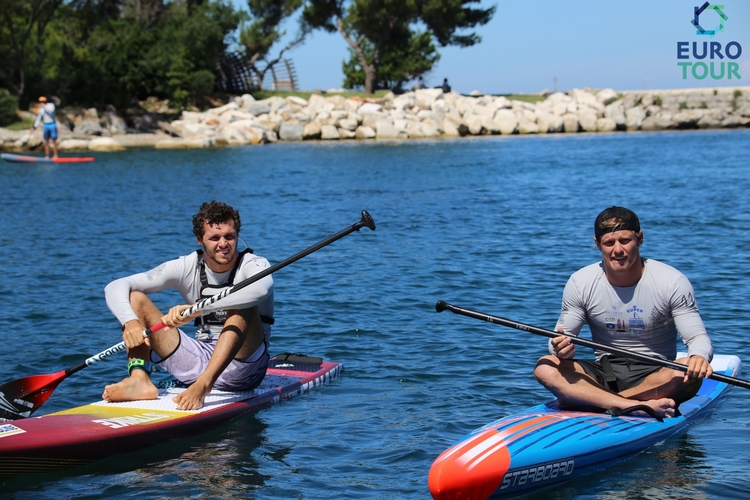 The Race Map made us start on flatwater from a little island in front of the center of Porec to round the city and go for a long 9km leg to Lanterna, where we still had to do 3km on flatwater before crossing the finish line. 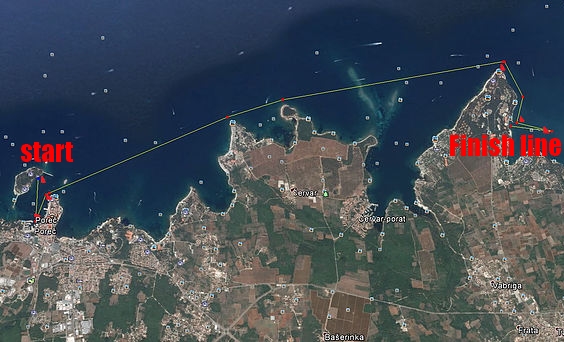 At the start, everyone paddled very fast as always but it was Aussie Jake Jensen to take the lead on his 14′ x 21” race board on the flatwater part to make the 7 of us (Jake, Connor, Michael, the Hasulyo’s, Davide and me) break away from the rest of field.

We soon arrived to the long leg of the race where we were able to catch little bumps. Michael made a gap on us very early and the only one who was able to keep up with him for a short time was Jake Jensen before he fell down from his board. Then, with Michael already a dozen meters out in front, Connor and I broke away from the rest of the group trying to make the best of the very light bumpy conditions while the Hasulyo brothers, Jake and Davide were staying in a group not far behind. 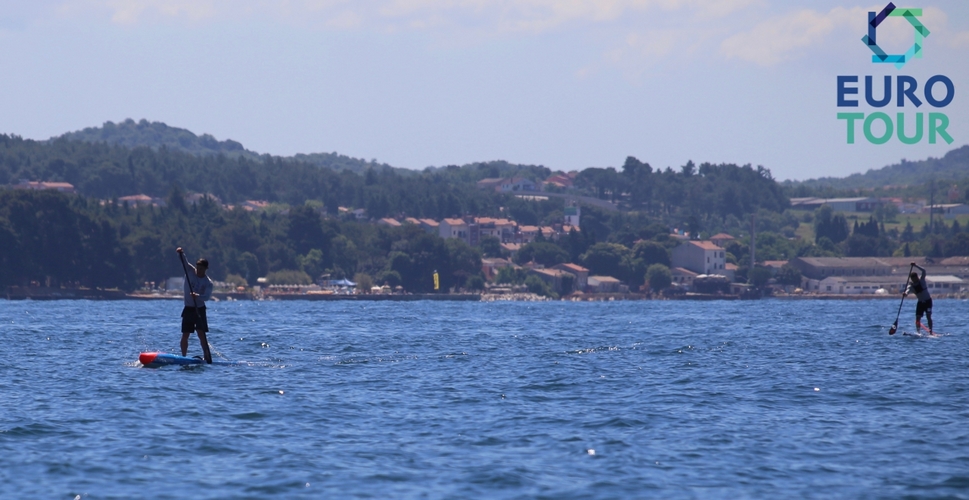 The situation remained the same until Connor made a push to break away from me while Bruno Hasulyo did the same thing in the group behind to fly back to the third place. At the end of the long leg, when we reached the cliff point, Michael was comfortably sitting in front with more than minutes of a gap, Connor was sitting in second place with Bruno just 30 meters behind and myself also 30 meters behind Bruno while Daniel Hasulyo and Davide were less than 50 meters behind me. It looks like Jake, such as is San Sebastian the week before, wasn’t able to paddle the hardest he could on his 21” flatwater board and was eventually a few minutes behind the 6 first places. 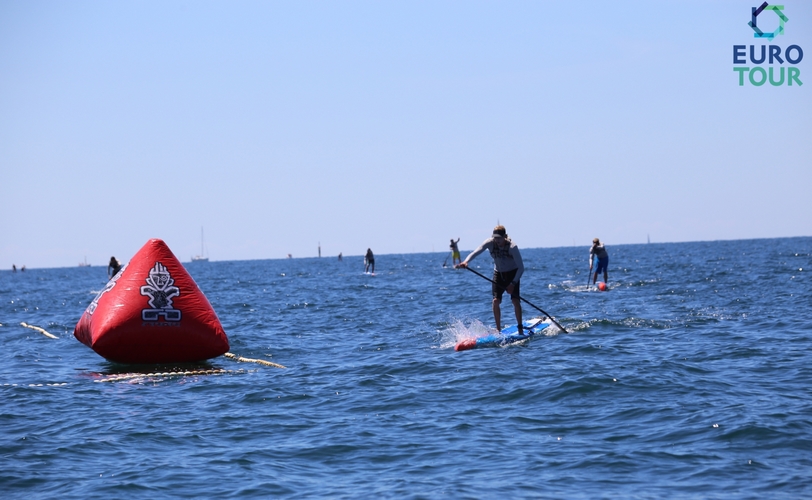 On the last 3km of flatwater, the situation remained quite the same with Daniel Hasulyo just switching places with me and Bruno Hasulyo almost catching Connor in the end. I’ve been really impressed by the power of Bruno and Daniel on flatwater, they are litteraly flying over the water. 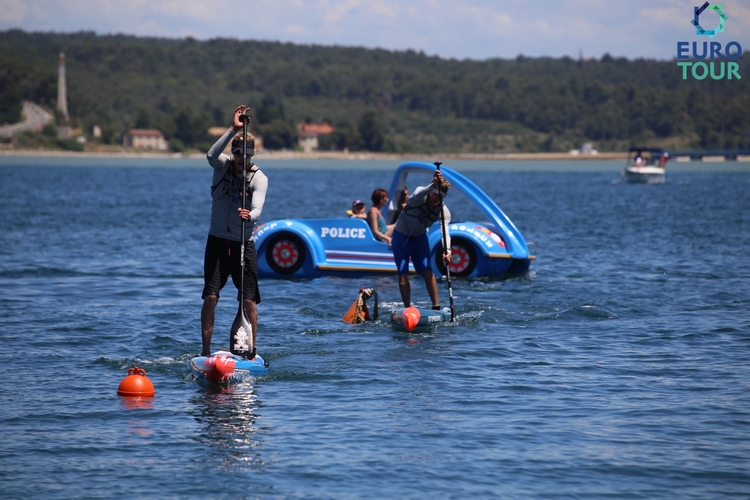 Michael Booth increased even more his lead to cross the line in first, claiming a big win by over 2 minutes from second place Connor Baxter. Bruno Hasulyo crossed the line a few seconds behind Connor while Daniel outsprinted me on the last meters to end up fourth while I rounded the top5. 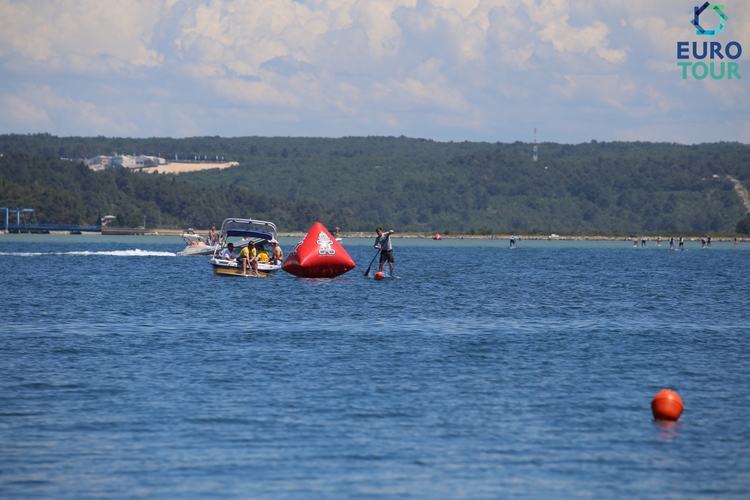 Then Davide Ionico, also putting on a good performance this day, crossed the line in 6th place, a few minutes ahead of his Fanatic team mates Jake Jensen (7th) and Filippo Mercuriali (8th). Rounding the top10 were Branislav Sramek (9th) and Matteo Baleani (10th). 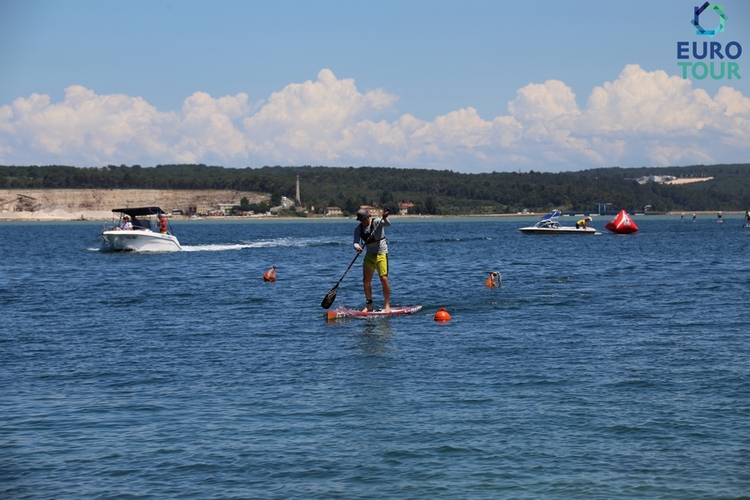 The women’s race was promising a good fight for the first place between the two Starboard team mates Fiona Wylde and Manca Notar while there was also a nice contigent of european women racers to fight for the podium. However, Fiona looked the strongest on the race and was unstoppable on her way to claim her first big win on the EURO TOUR after a bunch of second place finishes in the previous races. 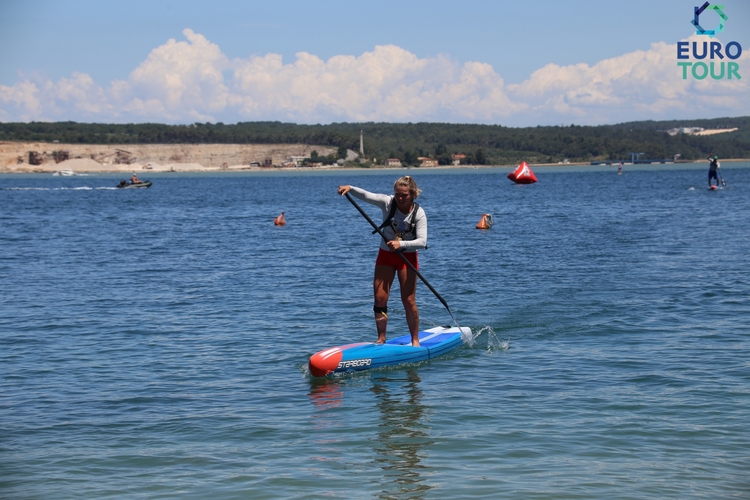 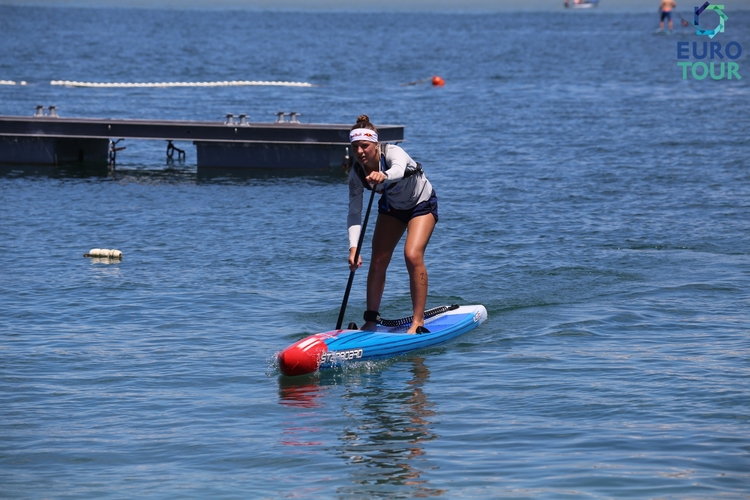 After the race, we all enjoyed some exciting formats of SUP Racing with a XXL SUP race and a SUP-Polo Tournament. And as it XXL SUP wasn’t fun enough already, we took the opportunity to mix up the race with a Parkour Run on the inflatable Aquapark next to the finish line for one of the most fun race I personnally ever did. 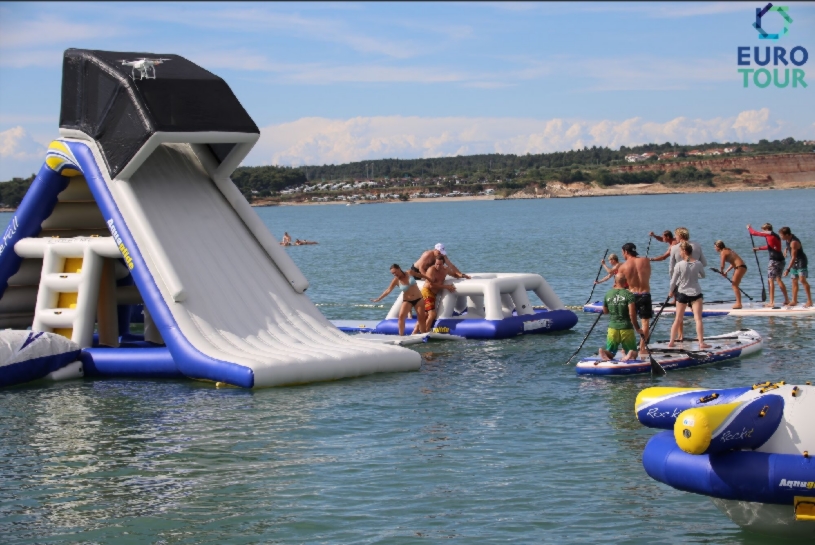 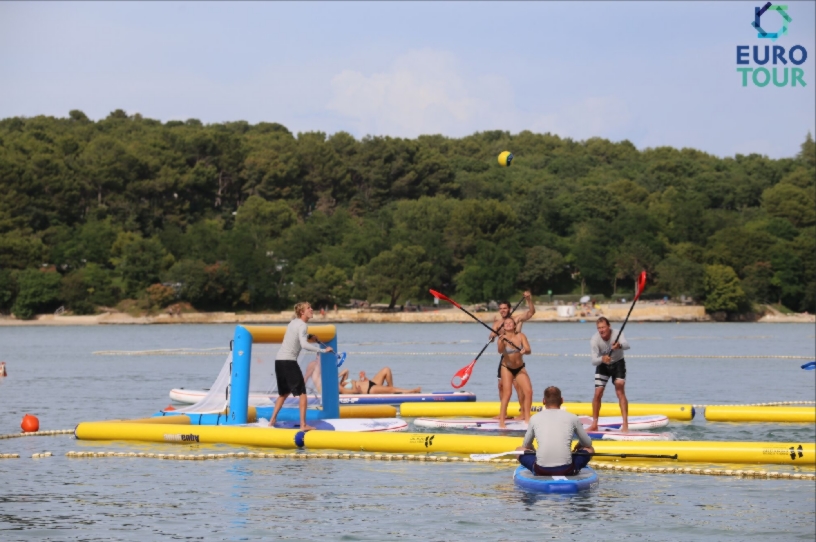 The day ended up with a nice Ceremony crowning the champions of the event and a Barbecue in the Resort. So I would like to say a big THANK YOU to the organizers of the event and of the Euro Tour for once again setting up an amazing event. The life on the EURO TOUR is definitely great these days! 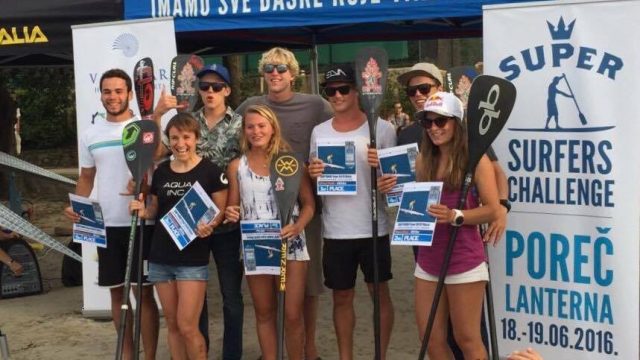