In the absence of a live stream, video summary or press release (we expect them to appear in the coming hours), here is all the info that TotalSUP has managed to gather for our readers about the Red Bull Heavy Water event that took place in San Francisco yesterday. 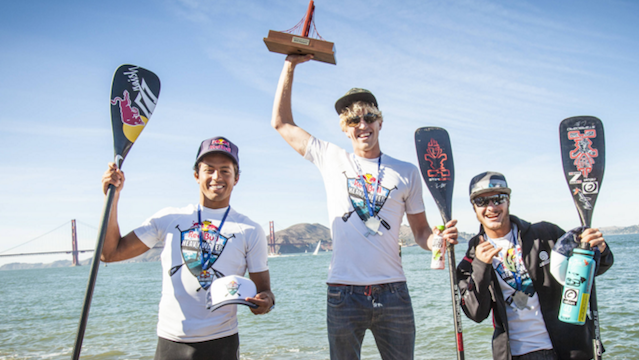 A win at the Red Bull Heavy Water was what Connor Baxter needed to comfort and increase his lead over the competition to win the world title.

Close to 100 at the beach start, 50-60 at the finish and a lot of people watching around the course

It wasn’t the huge set-up you would usually expect from Red Bull. Red Bull was there with a few Red Bull girls distributing drinks but no big scaffolding in sight or anything like that. There were, however, helicopters and drones and heaps of photographers around the course.

The course was around 13km

As described by Connor Baxter (footage by Onit Pro)

and by Zane Schweitzer (footage by Onit Pro)

The shore break at the start was overhead heavy and relentless with not many gaps. Leonard Nika for instance got stuck for several minutes. (footage: @bolliwoods)