Huge congratulations to Izzi Gomez for her win at Turtle Bay in Hawaii on the first stop of the Stand Up World Tour. Following an ankle injury which has kept her grounded for most of the off-season, the double stand up surf world champion made an impressive display of strength and technique along with her Starboard teammates Fiona Wylde, 2nd, and Shakira Westdorp, 3rd. Great performance by Nicole Pacelli 4th and Tarryn King, 5th. 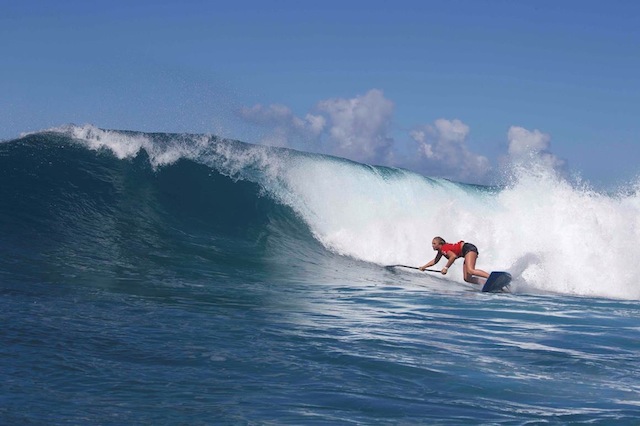 The event was the first stop on the 2016 Stand Up World Tour (SUWT) organized by the Waterman League. Izzi Gomez outperformed its main rivals, defeating France national champion Caroline Angibaud in the quarterfinals and Brazilian rider Nicole Pacelli in the Semis. In the final, with a total score of 16,27 (8.5 and 7.77), Izzi Gomez left no chance to Fiona Wylde (6.5 and 6).

Here is what Izzy had to say:

I’m feeling very good. I’ve come to this event 4 years and I’ve never won it so I’m very stoked right now. I’m so happy to be on the North Shore of Oahu, one of my favorite stops on the Stand Up World Tour. This year I was determined to win. I wasn’t sure what to expect since I had to take two months off due to an injusry. I decided the best thing I could do was to master the break. I paddled out in all conditions until I was somewhat confident.

The first day of the competition I kinda had a rough start and couldn’t find my rhythm, but I was fortunate to win both of my heats making it to the quarter finals. I just realized that I had made too many mistakes and it was time to step up my game.

The next day we scored! The conditions were perfect for Turtle Bay! All the girls did a great job of showcasing their talent. The heats were running neck and neck. Luckily, I was able to turn it on. When I made it to the final, I knew I had nothing to lose. I was just happy to be there doing what I love! And better yet, I finally conquered Turtle Bay!