So, when we (APP World Tour) caught up with him a few months ago to ask how he connected the dots to claim 3rd place in the 2017 Red Bull Heavy Water event when multiple world class athletes were completely denied by Ocean Beach’s treacherous shore break.

Massive swell and no sleep. He literally landed in San Francisco about 5 hours in front of the event. Travis Grant flew in on the red eye in hopes of making it to the Red Bull Heavy Water in 2017.   He says he got about 2 hours of sleep that night.

When he awoke in the pre-dawn hours to get ready, he and the rest of the contestants had no idea what the conditions were like.  They’d heard that this was one of the ‘biggest swells of the century’. But no one knew what to expect, especially in the cold water of Ocean Beach, San Francisco.“I admire his tenacity and his vision of what he’s trying to do,” says Grant of APP World Tour organizer and CEO Tristan Boxford. “I enjoy the thrill of competition and this is something totally different,” he reports on the Red Bull Heavy Water big wave SUP racing competition held each year in San Francisco, CA. 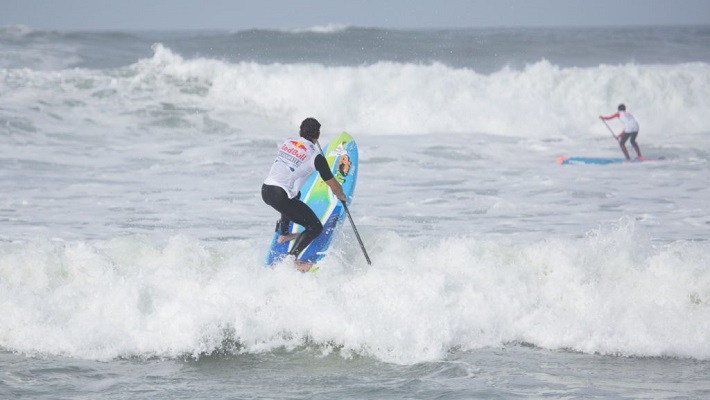 No one knew what was going on that day.  No one knew the course and the secret reef breaks. I had made myself go to sleep for a couple of hours the night before and now, facing this unknown test, my thought was:‘You have this energy, right?’” recalled Travis.Going on to state that the swell didn’t even look that big from the parking lot.But then, they were high above the shoreline and still a long ways from the beach front. He didn’t look at the swell either when he and the other athletes were taken by boat out past the break to the start line.

He reflected on his friend Raimana’s advice before going out into large surf.  Raimana Van Bastolaer, whose name is synonymous with Teahupoo and big wave surfing.  Travis recalled Raimana’s stalwart belief that if you’re putting yourself out there in a large swell, you need to be confident in your ability.  You’ve got to trust that you’re good enough.

For Grant, it felt like they all got thrown out into the middle of the ocean, behind the raging swell with hardly more than a Good Luck! “The energy in the ocean gives you energy” said Grant  “Your results in competition are just a bonus from that experience.”

Grant recalls the boat ride out was silent. There was no chatter, no banter.  Each man was in his own world, wondering if he would make it. 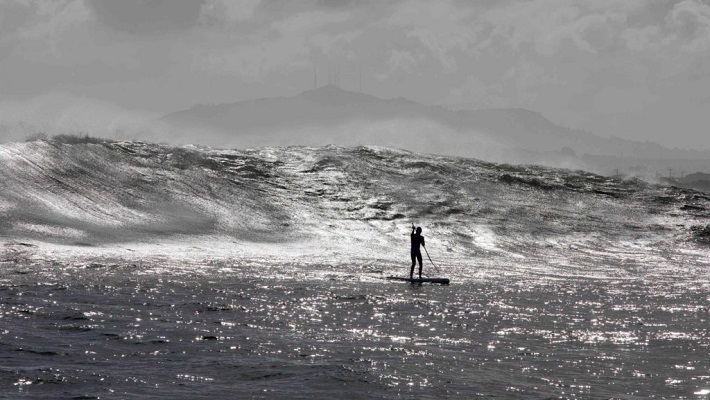 At the drop point, where the athletes were told to get out of the boat, several men didn’t move, self selecting to stay behind rather than risk the carnage that awaited.  No one had any comments about their decision.  Everyone held respect for what was happening outside at Ocean Beach that day.Travis Grant worked within his deep waterman skill to find his success on October 20th, 2017, the day of last year’s Red Bull Heavy Water.

He remembers thinking that there was no way to match the ocean in energy on such a powerful swell. “When there’s that much energy in motion due to the swell, there’s all this surging in the water.” recalled Travis Grant. Grant recognised that it was way too easy to get fatigued quickly as the paddlers were in wetsuits and adrenaline was quickly having its way with them.Swells topping out at 15 feet took SUP racing to a new level at the 2017 Red Bull Heavy Water Paddleboard Race in San Francisco, California, United States on October 20, 2017. 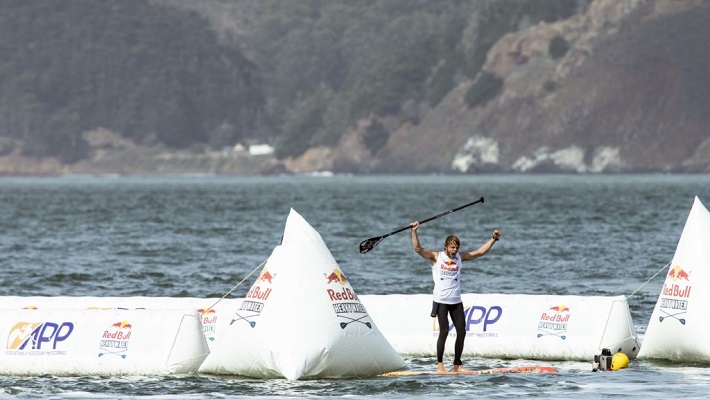 Flash rips and perfecting time to beat the swell!

Once he made it into the beach on his first pass through the race course that took paddlers through the breaking swell twice in both directions, Grant decided not to run at the shore break in order to make it back out. Where he witnessed Kai and Connor get swept down the beach a half a mile due to the massive swell, Travis paused and assessed the situation.

The Aussie says he was waiting for a ‘flash rip’, something to help carry him out through the heaving swell.  He described it as “On onshore wind days like this in a big swell, all the water comes sliding in toward the beach.  Eventually it has to go back out. Once you’ve identified the logistics of the water flow, you can look for the flash rip.”

That’s where the water changes.  It happens quickly and can be gone in the blink of an eye.  Travis’ experience taught him to be vigilant to the nuances of the water even while it was heaving all around him. When he spotted a flash rip forming, he put his energy into catching it and being pulled out by the rushing water through the energy of the waves. 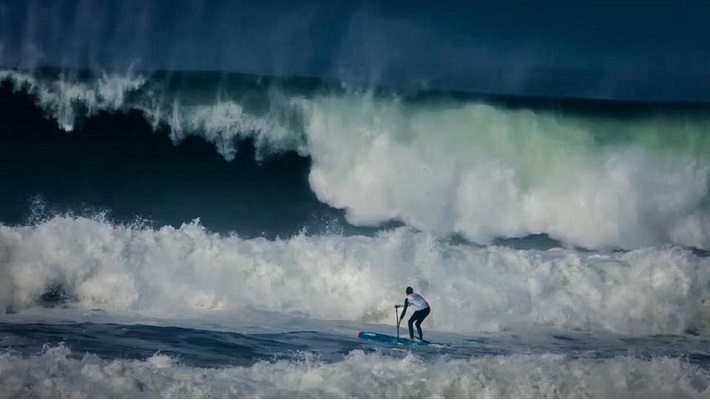 He says he did this and it worked for him both times he had to pass through the heavy shore break. Rather than risk getting pounded or try to power his way out, watching and waiting assisted the Aussie to a massive finish.

Stay tuned to www.appworldtour.com for more information on the upcoming Red Bull Heavy Water as we await the swell.  The event will be called 5 days in advance to give athletes time to  arrive in San Francisco. We are currently in the holding pattern as swell action is projected and analyzed.