Kelly Margetts, who just signed with Sunova, tells us more about this partnership and his trip in the USA where he will participate in several races throughout the month. He also come back on his first race on the American continent, the Coconut Cup SUP Festival, where he won the 12K flatwater and placed second in the 10K Technical Elite Course. 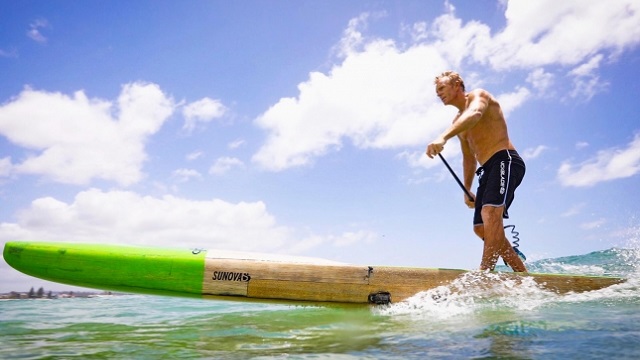 Signing with Sunova at the start of the year was an easy decision for me. Sunova’s vision for our sport and its future were on point with mine. In addition to the opportunity to help build a sustainable, grass roots, SUP race unit; as well as to help build and manage a race team, was to good to be true. Sunova have already proven themselves as one of the best SUP surf brands in the world with their innovative design and construction. Bert’s balsa technology, which put Firewire Surfboards on the map, gives our raceboards not only a unique look, but the balsa flex memory offers a distinct advantage. Add that to the pioneering designs from legendary Australian downwind paddler Marcus Tardrew, and we have a recipe for a fun future ahead.

I’ve been working hard with paddlepowertrainer.com in my preseason training and I have planned a pretty cool trip with my fiancé Sarah. We’re bringing Sunova to the southeast United States with a couple of island races, technique clinics in Florida at Urban Kai and Blueline, and then we’re taking on the Carolina Cup‘s infamous Graveyard along with the world’s best paddlers. From there, we’ll finish the trip in Annapolis with the Capital SUP crew. 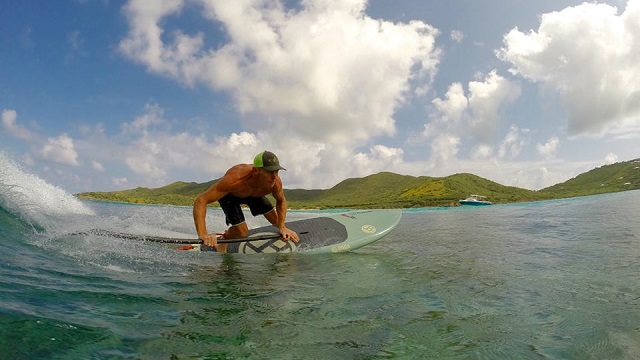 We’ve started our Sunova Tour in the US Virgin Islands, visiting good friends Jeramie Vaine, Bill Kraft and Isabelle Picard from Kite and Paddle St Croix for the Coconut Cup last weekend.
Friday we had the 12km downwinder on the western point of beautiful St Croix. It started at picturesque Cane Bay right off the beach and straight into the long rolling bumps. The first 6km was super fun, but then got pretty technical with the backwash around Hams Point. The second half continued into a flat-water grind, right along the rocky coastline to the finish at Freedom City Surf in Frederiksted. 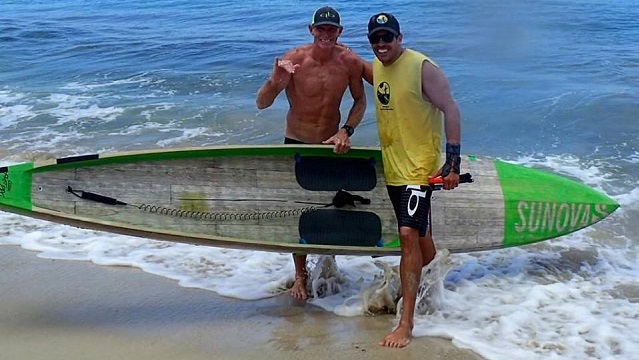 My new Sunova worked really well in these conditions, nice long bumps into the rough backwash, and then glided home in the flat. Josh Riccio was close the whole race after some leg rope issues at the start, but I was able to hold him off and take the win by 1min 30sec in those hot conditions. Mo came in third, Garrett Fletcher fourth, and local legend, as well as my host, Bill Kraft rounding out the top five. After 48hrs of travel, it was a great way to blow out the jet lag and put my early season training to the test.

Day two was the sprints, but I had an option to explore the island and got to surf most of the day so I didn’t race.
Day three was the 10km technical in the protected waters in front of the Freedom Surf City shop and restaurant bar, which created a great atmosphere. It was a loop race, which we did 5 laps of a diamond-ish shaped course. My pintail was less suited to the buoy turns than the downwind run, so knew it would be tough-going, backing up Friday’s win. Josh and Garrett got off to a great start with Mo and Bill on their tails, as well as young Brian Alvarez from Puerto Rico on his 12’6 who got a flyer of a start. I had to work through the field after an average start and was unable to catch Josh, who looked strong out in front with a gap on the field after lap one. I was stoked to come away with a second place.
The Coconut Cup was a nice way to start my first international trip for the year. 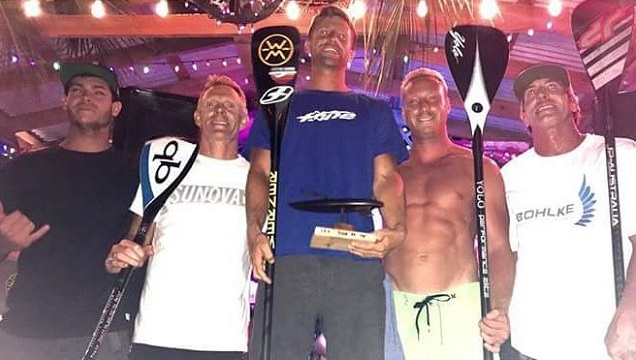