She’s a seven-time Ironwoman champion, and in her daily life she’s also a professional Nutrition and Health Coach, so it’s no surprise that when she first tried stand up paddle a few years ago, she ended up taking to it in no time at all. A true waterwoman extraordinaire, on land Karla Gilbert is also a self-proclaimed “Ironmum”, with two young children to look after when she’s not out on the water. With some impressive results in events like the Stand Up Surf Shop King of the Cut and the Maui Jim Ocean Shootout in 2017, we can expect to see more of her in the year to come. But for now, let’s take stock of the twelve months gone by. 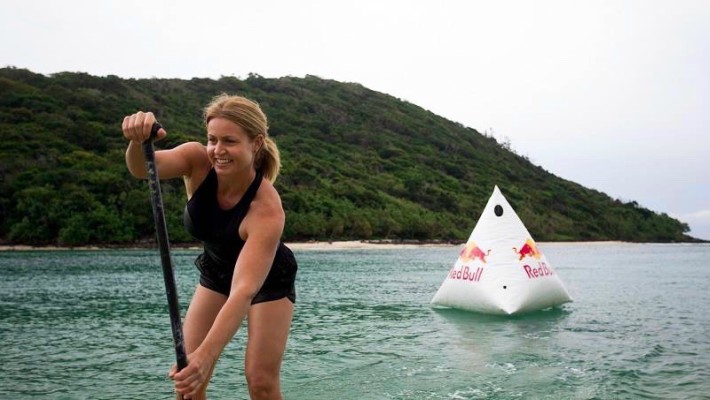 Hey Karla! You recently placed second in the Stand Up Surf Shop King of the Cut 2017 in Perth. What was that like?

The King of the Cut is always a great race to put in your diary. The people, organisers and beautiful coastline make it a must-do event.

This year the wind was not ideal at the beginning, and it wasn’t until about the halfway point that it really kicked in and things started to get a good flow.

I felt really good and it seemed to go quite quickly, but Angie Jackson was just too strong on the day and she had a ripper of a race. 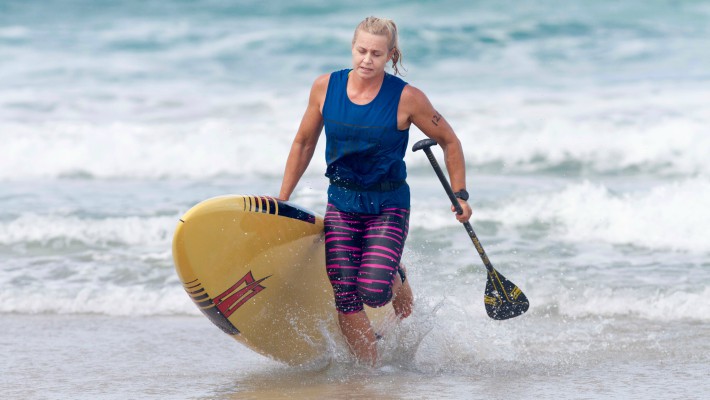 What has been the highlight of your year in 2017?

With regard to stand up paddle, the highlight of my year was returning to Maui for the Maui Jim Ocean Shootout, sneaking in a Maliko downwind run and taking the 2-day gruelling event win.

I love combining all the water disciplines. And being able to just turn up and have all the craft ready to use makes this event very unique.

And what has been one of the major highlights of your SUP career so far?

One of my career highlights as a stand up paddler would probably be placing third in the Battle of the Paddle (editor’s note: the BOP has since been rechristened the PPG, or Pacific Paddle Games) in 2014, with a noteworthy second place in the distance race. 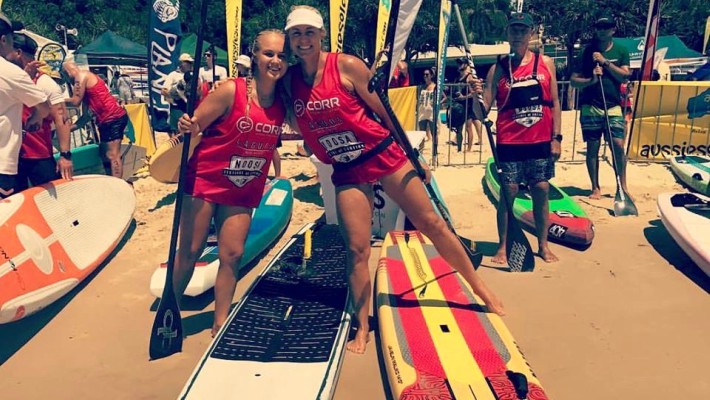 The Haven Classic took place this weekend in Victoria. Were you there?

No I was not in Victoria this weekend unfortunately! With Christmas just around the bend, it is a busy time of year after all, especially with parties going on everywhere.

And having two young children makes life at this time of year even more busy indeed!

When did you first get into stand up paddle? And what motivated you to get serious about it in the first instance?

I first started stand up paddling back in 2008. My first daughter had just turned one and I was looking for something to do to help regain some fitness without impacting my body too much.

Of course, anything that is in the ocean takes my fancy, so I took to it like a duck to water, so to speak! I entered a local event and did ok in it, and that saw me qualify for the Australian titles that I ended up winning. Since then, I haven’t stopped.

It all happened by accident really, without too much force or intention to compete competitively again after retiring from professional ironwoman racing in 2003. 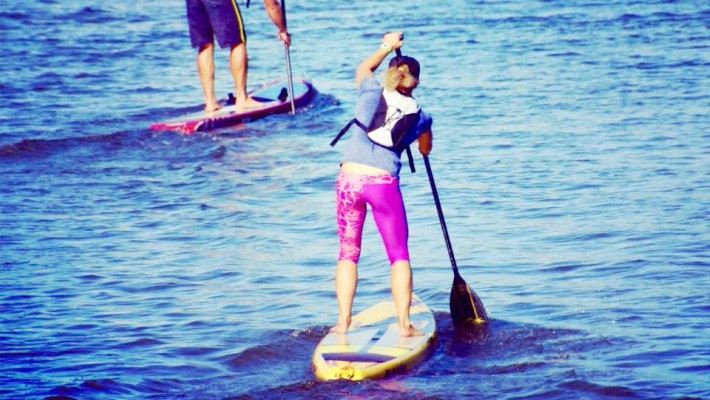 What sets stand up paddle apart from other watersports disciplines?

Stand up paddling is very unique in the sense that it gives you a different perspective from the height you are at on the water line.

SUP is also very versatile. You can go paddling on the flat for fitness, go surfing, downwinding and now foiling just to mix things up a bit more.

What future do you envisage for SUP? Do you think it has a long road ahead of it?

The future of SUP is an open book. I don’t see why it won’t get bigger than Ben Hur, although there will be some hurdles and teething problems (which the sport is experiencing now).

In Australia we are very institutionalised regarding our culture around surf lifesaving and surfing. SUP is very much still an up-and-coming sport, taking a backseat to the already formed and professionally run surf sports. I would like to see this change, but it has to begin at a ground-roots level, notably by attracting juniors into the sport.

The only way the sport is going to appeal to the juniors is if they have role models they can follow or see a future for beyond what the already formed SLSA (or professional surfing circuit) can offer.

So it is a hard act to follow. You would like to think pure enjoyment will attract children, but, in this day and age, there needs to be something more attractive dangling at the end of the line in order to draw in future generations in a meaningful and sustainable way. 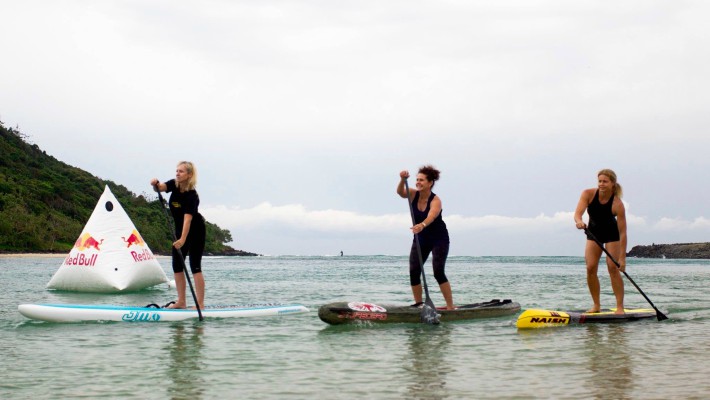 How would you describe the SUP scene in Australia? Is there a vibrant SUP community there? Do events like The Doctor and King of the Cut help grow the discipline through greater exposure, in your opinion?

The SUP scene in Australia is still very much… how to put it?… embryonic. But vibrant at the same time. We have a lot of top-notch SUP riders, but there aren’t great numbers in the discipline as of yet. Quality over quantity for now at least.

Big races can attract around 150 entries, but this falls short of any OS event. The organisers here do a great job with each one of their events, but for them to really be put on the calendar, we need to see more international competitors.

This is hard to achieve, as our summer is opposite to that of the US and Europe. Plus, being at the bottom of the world makes it a long way to travel for many. 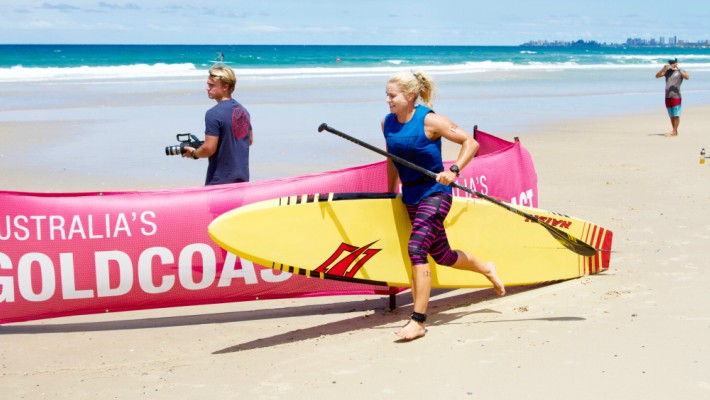 What ambitions and plans do you have for 2018?

My ambitions and plans for 2018 remain focussed on my business as a Nutrition and Health Coach and looking after my young family, but SUP does help keep me sane on the side. That’s always a plus!

I would love to get into foiling more, and I am absolutely in love with my Naish foil and trying to master to art of that. This is an exciting area of the sport and a new challenge.

Race-wise, I am not sure yet. I have consciously tried to hold myself back from too much racing, and not to enter the domain of being too full-on with sport again. Having kids definitely helps with this! 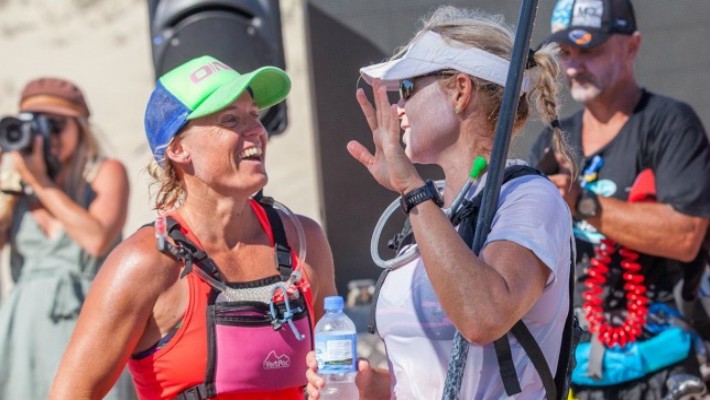 If you had to describe stand up paddle in three words, what would they be? 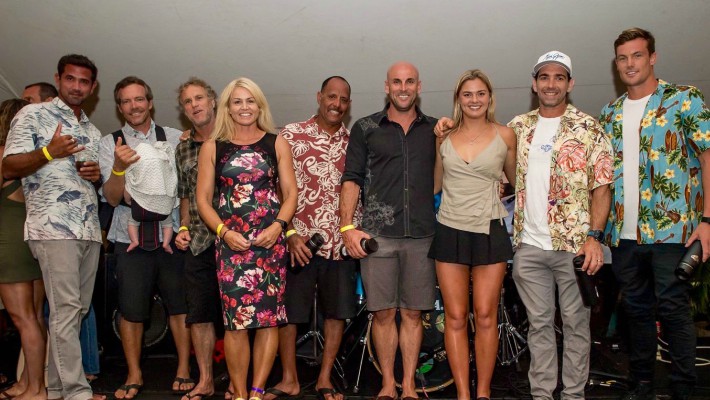