Another great week-end of international SUP racing. While Connor Baxter and Fiona Wylde were celebrating their victories at the cold but beautiful St Ives Bay Celtic Cup in Cornwall,  more than 120 riders were in sunny Sainte-Maxime, in the south of France, for the 6th edition of the SUP Race CUP organized by La Cigale Surf Club,  which was, also part of the new european series, the Euro Tour. So many news and memories. Here is our top 10 !

1. Travis Grant and Sonni Hönscheid dominate the field
Two Euro Tour week-end competitions and two clear wins for both the Australian and the German champions. While Travis Grant played the clock in the Long Distance on day 2 after winning the technical race with a 10 second lead over Jake Jensen and 30 seconds on Titouan Puyo, Sonni did not bother thinking too hard and made sure to have two comfortable wins over Lina Augaitis (2nd) and Céline Guesdon (3rd) in both races. Travis who arrived 2nd behind Titouan Puyo, still managed to claim the win of the Long Distance as a friendly Titouan Puyo stopped to wait for his travel mate on the finish line. The electronic tags which had to pick a winner did the rest. It's the last stop of the Euro Tour for Travis, who was a little disappointed to not stay in Europe for the rest of the tour. Sounds like a date for next year's Euro Tour. 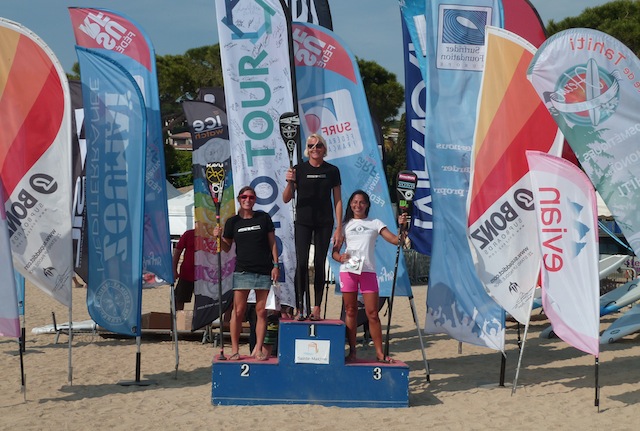 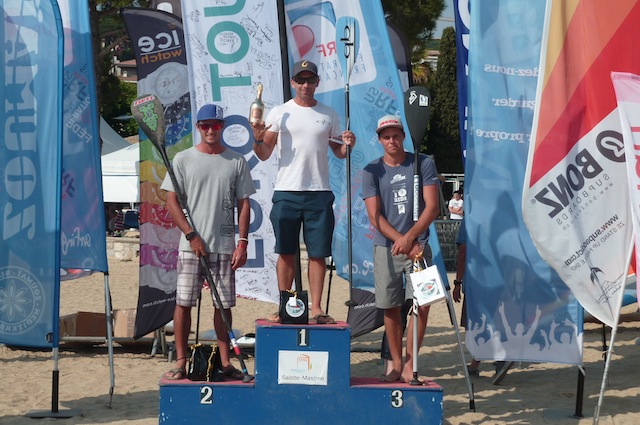 2. Jake Jensen and Lina Augaitis's starts in the Euro Tour did not disappoint
Freshly arrived from Australia and Canada, Jake and Lina quickly showed they were not in the south of France on holiday. Jake Jensen had an aggressive start in the Technical race on day 1 and animated the front of the race with Leonard Nika until forming a side-by-side paddling unit with fellow australian Travis Grant, which made it very difficult for Titouan (3rd) to catch-up. He finishes 2nd behind Travis and 4th in the Long Distance behind Leonard Nika. 3rd overall. Lina took the 2nd place in both the technical and the long distance races.

3. Titouan Puyo: 3, 2… 1?
3rd after the technical race, Titouan started the Long Distance with a clear determination to score. First at the 1st buoy, he managed to be offensive a few times during the race and to lose most of his opponents until he saw an imperial Travis Grant only 10 meters behind him when he thought the job was done. Titouan landed first on the beach and waited for the australian champ on the line knowing that his lead time on the Long Distance was not enough to take the Overall 1st position. After his 3rd place in Mallorca and now a 2nd place in Sainte Maxime, Titouan is a strong candidate for the Euro Tour podium but is still waiting for his first overall event victory in the new european series.

4. Leonard Nika: the unlucky 4th
A very fast starter, the italian Leonard Nika has demonstrated once again that he is a talented front race animator. A strategy which is however not completely paying off as Leo is just off a Euro Tour podium once again. Leonard Nika, who blew up our YouTube screens when he was in front of the ISA Worlds Long Distance race for 2 of the 3 laps (but “only” finished 8th), is left wondering whether he shouldn’t time his bursts of speed differently, use the draft and save his energy during the race more. His 3rd place on the Long Distance on day 2 ahead of Jake Jensen seems precisely to be the result of a different approach as Leonard Nika didn’t start as fast as usual on Sunday. A change in strategy which might become a trend ? 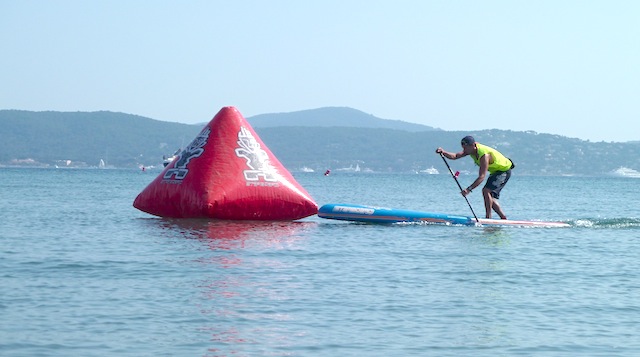 5. Four frenchmen and three italians in the Top 10
The homeboys were determined to defend their national turf. Titouan Puyo (2nd overall), Arthur Arutkin (5th), Gaétan Séné (8th) and Martin Letourneur (9th) can’t really be presented as locals though as Titouan is from New Caledonia and the 3 others are from french Brittany.
Just like in Port Adriano, Mallorca, where they occupied 4 of the top 10 spots, the neighbouring italians showed another great display of strength : Leonard Nika (4th), Giordano Bruno Capparella (7th) and Davide Codotto (10th).

6. Céline Guesdon breaks a toe
We saw a limping Céline Guesdon throughout the week-end. The unfortunate french champion, who claimed a 4th place at the ISA World Championship 3 weeks ago, hit one of her toes with her paddle during training, the day before the competition. That didn’t keep her from being a very strong participant throughout the week-end with two hard-fought 3rd places in both races.

7. 14' or 12'6 ? A real dilemma for the non-professional racers
Unlike in Mallorca last week, 14' and 12'6 racers did not run together. The former were called Elite racers and the latter Amateur racers –  a touchy choice, and probably not the best one as the SUP Race Cup organizer Yannick Pinaud confessed, given that the distances and the race courses were very similar, that the SUP Race Cup's main ranking category has traditionnally been the 12’6 one and that both groups of paddlers had some extremely good (… and not so good) racers. Apart from a cast of 15/20 international riders competing in the Elite race, the only noticeable difference this time between the Elite and the so-called Amateur paddlers, was a 1'4 board size difference. Although, in all transparency, any rider in 12'6 could have joined the Elite race (for a higher entry fee and in order to compete for the prize money). But if the majority of the paddlers, who were paddling on 12’6 boards – and, let's be frank, can't afford to buy and store a new 2000€ board for most of them – were a tad disappointed to not compete directly with the internationals (as they did in the 5 last editions), they were mainly left with one tough question… the answer to which is not entirely theirs: “should I stick with my 12'6 or change it for a 14' board? (in order to compete in most events in the main category?)”. And it really doesn't matter which one ! That seemingly simple question puts a huge question mark over the entire race segment of the SUP industry and race organizers as well as brands should really make up their minds if they don't want to lose momentum with a fast-growing sup racing crowd. At the end of the day, the “best of the rest” and the “average SUP racing Joes” are the core market … and they only have room for one board.

Surprisingly, frenchmen Eric Terrien and Joseph Gueguen didn’t have the (mental?) stamina to finish the Long Distance race. While the young Joseph Gueguen who is still very much a newbie in the sports (he only started last year and surprised everyone ranking 7th in the 2014 Paris Nautic Sup Crossing), acknowledged hitting the wall halfway through the course and blamed his lack of experience for it, Eric Terrien, in 6th position after the technical race the day before, confessed that he wasn't feeling comfortable, lacked concentration and that his best option was to pull out this time around.

Giordano Bruno Capparella is one of the “revelations” of this SUP Race CUP. The italian BIC SUP rider is not completely unknown in his home country where he has regularly taken part in races but hasn't gone out much of Italy yet. He takes the 7th place overall just behind Bicho Jimenez. Hats-off also to Jérémy Teulade, who makes it in the top 10 on the long distance. Jérémy, 21 years old is the older of the Teulade Brothers, two new young recruits by team Starboard France.

A huge congrats and enormous thanks to the organizing La Cigale Surf Club, his chef d'orchestre Yannick Pinaud and his army of volunteers for putting together a great 6th edition!

Next stop of the Euro Tour Lost Mills ! 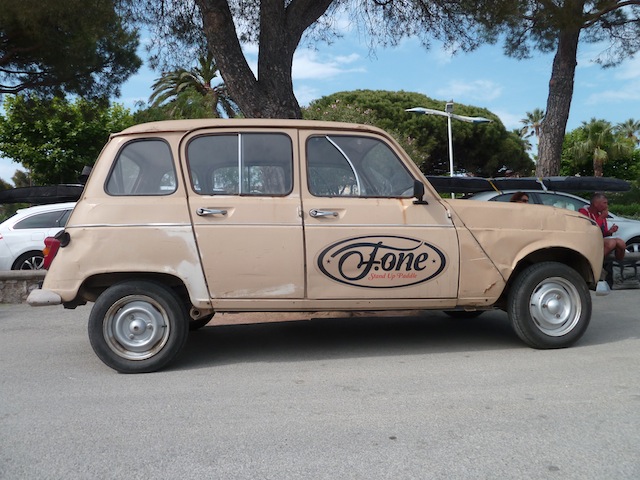