Last month 90 paddle boarders plus litter picking groups of around 40 adults and children collected an estimated 200 kg of plastic waste and litter from the river and towpath between Kew Bridge and Richmond.

The event called Get On Board was run in partnership between Be Richmond and Active360  to highlight the problem of plastic pollution in the freshwater system and in Thames. This pollution in turn leads to contamination of the oceans. Another litter collection along the towpath was led by Colin Cooper, Chief Executive of South West London Environment Network. 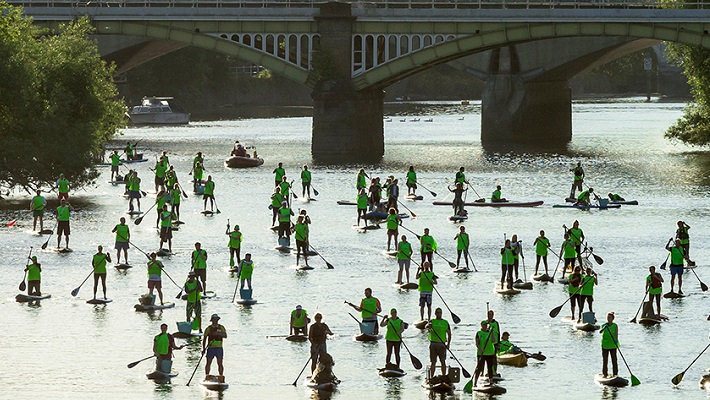 At the same time Carlos de Souza and Carolyn Newton of the Whale Company joined the paddlers on boards made out of plastic bottles as part of their marathon 300km Source to Sea paddle to raise awareness of plastic pollution in our waterways and with the aim of delivering a ‘Message in a Bottle’ to Parliament. The event also saw the launch of In The Drink a new initiative with riverside pubs/bars to reduce the number of single-use plastic cups in London’s waterways.

Starboard ride Zane Schweiter was also out on the river at Kew Bridge getting in his first taste of Thames SUP. He also picked up some plastic rubbish with the @starboardsup paddle hooks and talked about our new In The Drink scheme to replace single use plastic beer cups with reusables!

Out on the river at Kew Bridge tonight with world champion Zane Schweitzer getting in his first Thames SUP. Picked up some plastic trash with the @starboardsup paddle hooks and talked about our new In The Drink scheme to replace single use plastic beer cups with reusables. #inthedrink #active360 #starboardsup @inthedrinkuk @active360sup