Besides the ultimate challenge the SUP 11-City Tour is also a unique experience. 200 national and international paddlers are expected to get to know Friesland, the northern province of Holland, from the water.

Open fields with windmills, cows, and sheep will present itself along the water ways exchanged by eleven historical cities built from 1700 onwards.

220 km of paddling in 2 formats, either spread over 5 days or non-stop, your choice.

The non stop starts on 1st September and will finish on the 2nd September.

The 5 day will kick of on  4th and finish on the 9th September.

A world record attempt will be made on the 9th, attempting to break past 1000 paddlers on the water!

Every day an award ceremony will take place to celebrate the winners of the competitive categories (solo and team m/f/mixed) per day. Day winners will receive an authentic Frisian prize. We will also pay attention towards creativity and good attitude during the days (“special prizes”). The amateurs will not be rewarded for their ranking.

The overall Elite-winners in division solo male/ solo female will receive price money. Other categories can win product prizes. For the team competition, we introduced the ‘SUP 11-City Tour Team trophy’! Each year the winning team (male/female/mixed) can take their trophy to exchange it to the new winner the following year.

Prize money
Men and women athletes will receive equal price money. The amount of prize money will be known prior to the event. 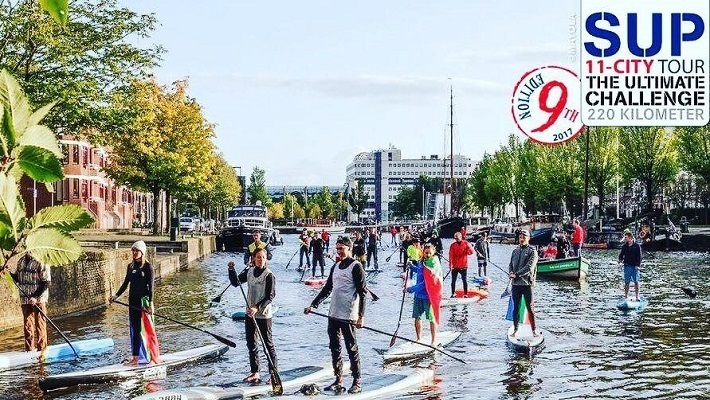