Not long ago, Chris Parker of SUP Racer asked me, “what motivated you to actually do it?” He was referring to the 24-hour record. With races like this, you always have to ask yourself the same question. Why do it?

Signing up is easy. That’s the first step. You can be sitting at home on your couch, with your computer at hand, and with just one click you’re signed up. Actually going through with it is different.

It’s hard to explain how one feels when they are involved in such a race. The muscles ache, you lose sleep, you feel hot during the day and freezing at night. So again, why do it? I think we do it for a very good reason. For the sense of adventure above all I would say! It is a journey into the unknown, a struggle to achieve something through some hard graft. 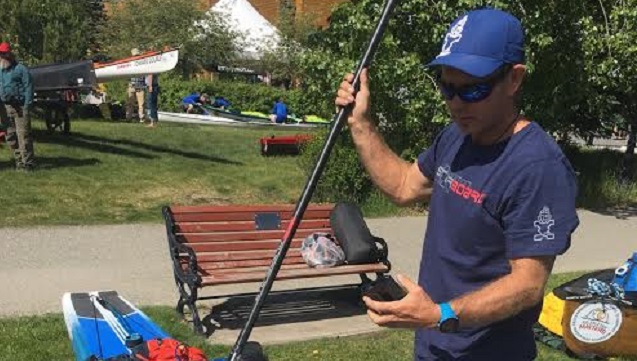 This year, I felt quite prepared right up until 5 hours before I was due to leave. And then, setback! My flight to White Horse was cancelled. As I had only factored in an arrival time of one day before the race itself, this was a big problem. Luckily, within one hour I was able to find the last remaining seat on another flight to Yukon.

As this race was being held in a relatively remote location, a skippers meeting was due to be called. The briefing would last for over an hour. There, we were told about all the checkpoints and potential hazards along the way. In addition, an extra orange garbage bag was issued. Normally, you are given one bag to hang up if you are in trouble throughout the course of the race, and this acts as a beacon so that they can find you. 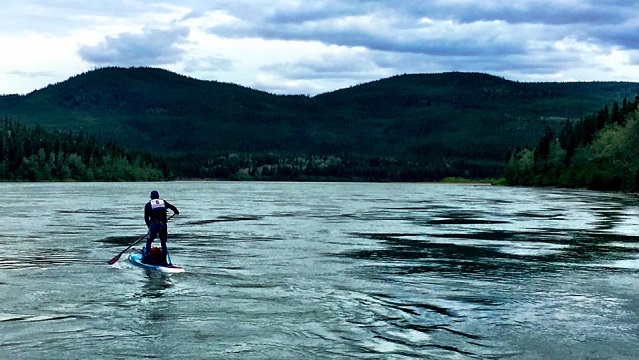 At the briefing, we were also told that – if necessary – we would have to camp outside for two days if trouble was encountered along the way. Only in life-threatening circumstances would a recovery helicopter be sent out. So people have to know what they are getting themselves into.

After a good night’s sleep, we began the race the following day at midday. The conditions were perfect, with just a little wind and some cloud cover.

I was using my Starboard All Star 14×24.5 again. The board is wide enough to provide stability and yet it is quick enough to be nimble and agile. 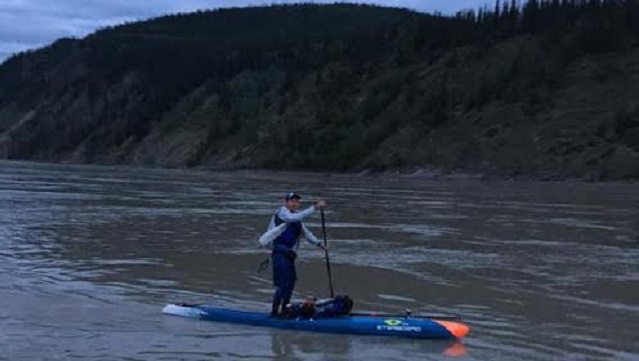 The beginning of the race was a 400-metre dash to one’s board or canoe, which were located on the river bank. The boards were all packed tightly together, equipped with all the necessary accompanying gear. This included a tent, a sleeping bag, 2 extra sets of clothing, a food tracker and medical kit, along with a spare paddle.

Personally, I got off to a great start. From the moment I hopped on my board, I got control over the current quite quickly. At a total of 715km, and anything between 50 and 74 hours, it really is a long race.

So going off on your own like this genuinely does mean an extended moment of solitude. Along the way, you will surely come across the kayakers and the faster 2-man canoes or kayaks, as both have great hull speed. But otherwise, you could paddle all day without seeing another soul. After three hours, we finally got to the dreaded lake, Lake Lebarge. In such a setting, a lot of wind could make life difficult for SUP racers, but this was mercifully not the case on this occasion. 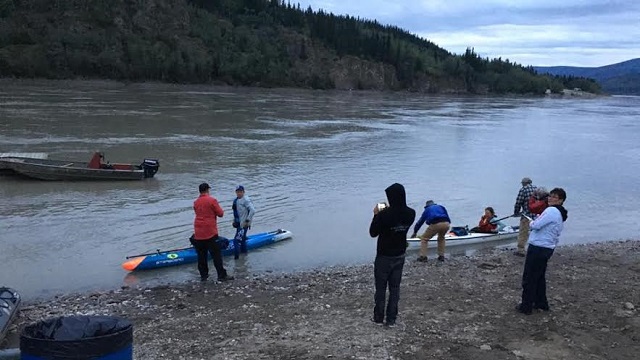 The lake was calm. I found myself paddling ahead of Jason and Peter. I expected Peter to be closer as he approached. At some point, one needs to take a break to eat something or hydrate oneself. After a couple of hours drifting behind one, Peter ultimately had to let it go, and he subsequently lost ground a little bit.

Knowing Jason, I figured he would be chasing me for the next 20 hours. I thought that if he were to get close enough, we would be able to battle it out later in the race. But little by little, Jason faded into the distance. I just caught a glimpse of him trailing behind as we reached the lake and then the river after 8 hours of paddling.

Getting back onto the river again elicited a real feeling of excitement. The transition is akin to switching from your first car (let’s just say, an anaemic little MKI Nissan Micra) out on the open motorway to a Lamborghini. You really just take off. The scenery is never boring either. Verdant countryside and undulating slopes abound in the surrounding area, which can be admired as you pass by. 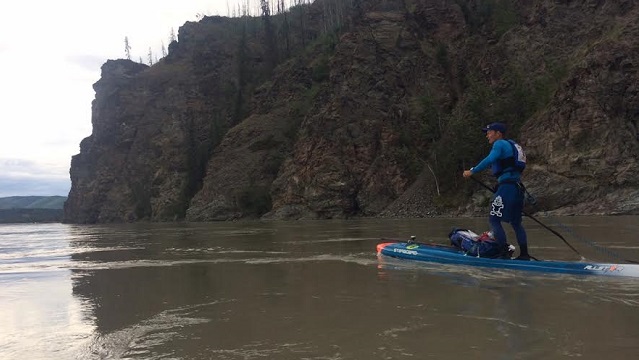 The 100 participating paddlers dispersed quite quickly throughout the course of this particular race. Sometimes, you team up with a fellow paddler for a while, and at other times you can be on your own for a very long time. Over the course of the night, there were a few times where the fatigue began to kick in. You can feel your head bobbing, you lose focus and you paddle with less intensity.

The trick is to snap out of this slumber as quickly as possible, because this is when you lose most ground. Having made it through the more difficult nighttime hours, I arrived at the Carmacks 7-hour mandatory rest stop an hour ahead of my recorded time last year. Jason was 45 minutes behind me and Peter 1.5 minutes behind him. Carmen Merkel just over took Joanne and arrived there when I was just about to get in on the board again.

At the break you get 7 hours, so you eat, drink, sleep and eat again. You also gear check and then you’re back on the water. Todd Philipps was our support and helped us during the break. A good support is worth a lot. It means no stress, eating quickly and sleeping more. Todd was gold for us. Getting about 5 hours sleep, which does amazing work for your body and soul. I left at 6:47pm, ready for another night and day of paddling. 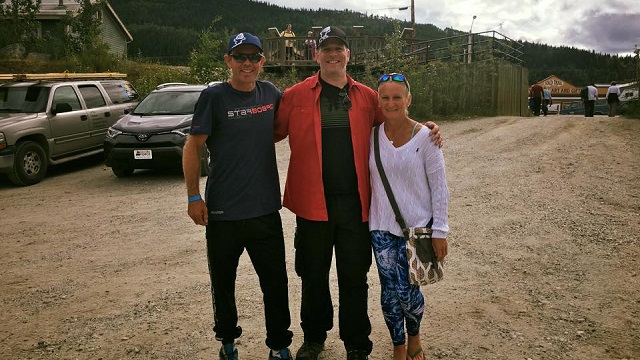 This time, I met one 2-person canoe. We stayed together for about 6 hours. Every time I made a quick stop to grab food or look at the map they would keep going because one person was always paddling. I was striving to catch up and after the third attempt I realised I was working way too hard to keep up, so I let them go.

For the next 8 hours or so, I was paddling by myself. Again, there is always a few hours where your body wants to seep but you have to tell it to keep going. Luckily, it is basically light outside all night long. After about 17 hours, I got to Coffee Cree, the 2nd mandatory three-hour rest stop. Again, you eat some and sleep for a few hours. When I woke up, I saw that Jason arrived about 45 minutes after me. 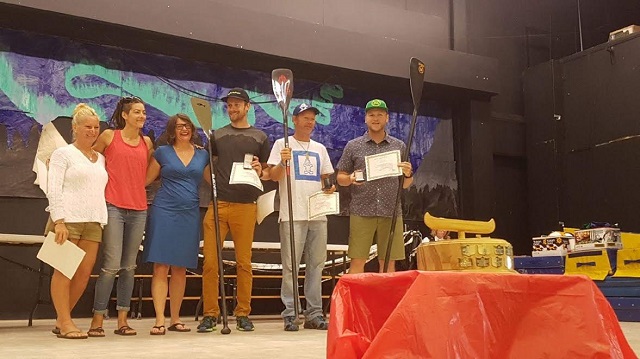 I had struggled a little during the last stretch to maintain a decent average speed. My back was sore and just refused to go any faster. In races this long the only thing you can do is slow down a little but keep paddling without longer than a few minutes break for food or rest.

Reading the map is another very important part of the race and I almost made a hames of it last year when I took a wrong turn. The river is wide, and sometimes it has multiple channels and islands. Taking the wrong channel could mean having a very good current for the next 20 minutes or almost nothing. I have caught up with others who were far away within minutes this way, and vice versa. 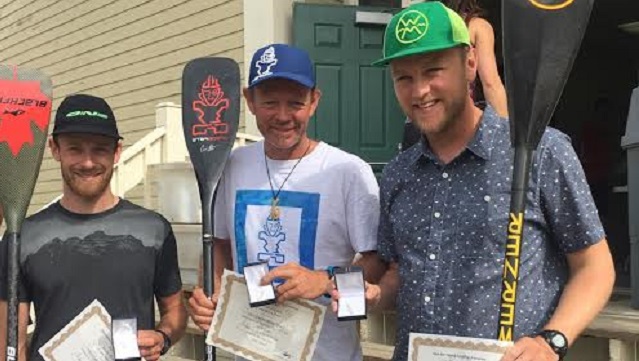 This year I had studied last year’s routes. And it paid off. Now I could use the shortcuts and make very few errors. Behind Jason and I, Peter was still in third, slowing down little and Joanne caught up and overtook Carmen.

After the 3-hour break, there are about 12 to 13 hours before reaching Dawson. This is really the home stretch. It is still a long paddle, but it feels like you are almost there. By now, I knew that I hadn’t made any mistakes and that I could win, and even break last year’s record in the process.

With renewed energy and focus I paddled strongly for the first 6 hours, alongside a solo kayaker. I took very good care when reading the map and the river in doing so. I recognised the mistake I made last year, where I lost 30 minutes, and I kept at it.

By the time you start to slow down the finish line is so close that your speed increases once more. Ticking away the hours, stroke after stroke. Already, you begin to think of the good food you are going to be rewarded with at the end.

I finished in 52 hours, 16 minutes and 6 seconds. A new record by 2.5 hours. Jason arrived at the finish line almost an hour later and demonstrated once again how good a distance paddler he really is. Joanne made good on her promise last year after she gave her wedding ring to the organizer and told her to only give it back after she finishes the race. She arrived with a great time of 59 hours 28 minutes. 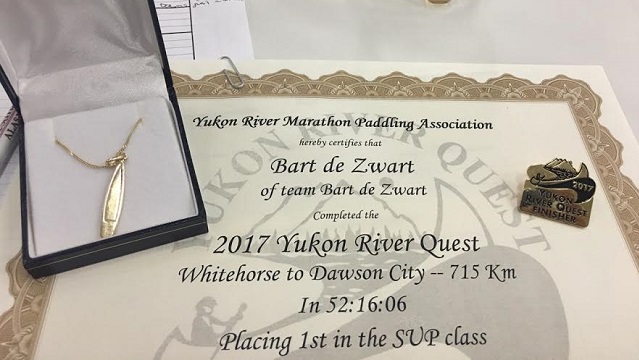 I spectated as many racers finished the race this year. Many (mainly the solo paddlers) come in filled with emotions after they cross the finish line. Many have gone to places they didn’t know existed. They dug deeper than they ever had before. This part of the race is so nice to watch, especially when you know what they have gone through. The body is so much more capable  of doing things than most people think. And a race like this one is testament to that!