Last Sunday, Tahiti-based photographer Tim McKenna, known among other things for his Waterman Tahiti Tour underwater work, explained to his Facebook followers the blurry circumstances of the accident he had in Paris last Wednesday.

“Last wednesday evening just before my flight back to Tahiti from France I decided to go into Paris to cruise around the city. Next thing I know I am waking up 12 hours later in a intensive care unit in a Paris hospital with multiple concussions to the head, broken nose, orbital fracture and bruising all over my body. It’s unclear what actually happened but I either blacked out and fell or was pushed down on to the railway tracks and hit my face with full force. I apparently managed to crawl back to the side where people helped me to get back up before I was handled by a ER unit. I handed them my phone asking them to warn my wife and family. Despite not remembering anything I obviously had some conscious moments. Make sure you have a family member number entered under the name I.C.E in your phone. It could save your family some stressful hours during an emergency where you loose consciousness. 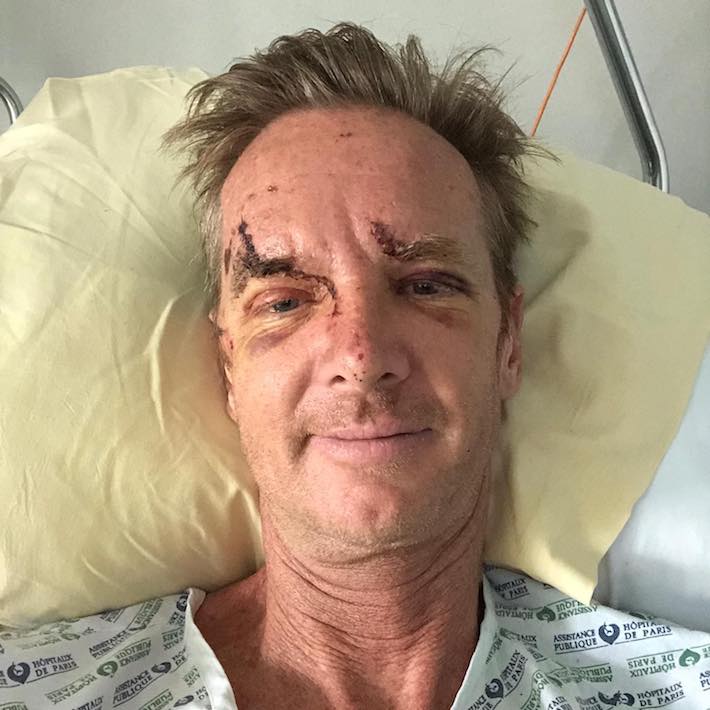 I have always considered myself more at risk walking around big cities than shooting in big waves, mountains ranges or helicopters. I guess this last episode will only reinforce that feeling.

The second photo is a mugshot after 4 days in Hospital. The swelling has gone down quit a bit but it’s still to early for me to fly.

Can’t wait to get back home and jump in the water. Crazy how life can change in a split second.

Thank you to all those who helped me get out of trouble down on the tracks and all the French public health care people that have been taking care of me and making sure I get back on my feet as soon as possible so I can head home. I can only imagine if this happened to me in the US : on top of the ordeal I would have to deal with a massive healthcare bill.

I will be back very soon with some fresh pix 🤙🏻”

We wish Tim a speedy recovery and a safe return to his home in Tahiti !