There’s no compromise when it comes to the design process and testing in the most extreme conditions SUP-specific apparel by StandOut SUP Wear, a Slovenian watersport brand with over 25 years of experience in manufacturing technical sportswear. TotalSUP caught up with  Rok Puvar, StandOut SUP Wear Team Rider, 2x Guinness World Record holder and Slovenian SUP Champion, to talk about his endurance SUP challenges, StandOut all-year technical SUP wear and the making of the StandOut acclaimed Dry Suit. 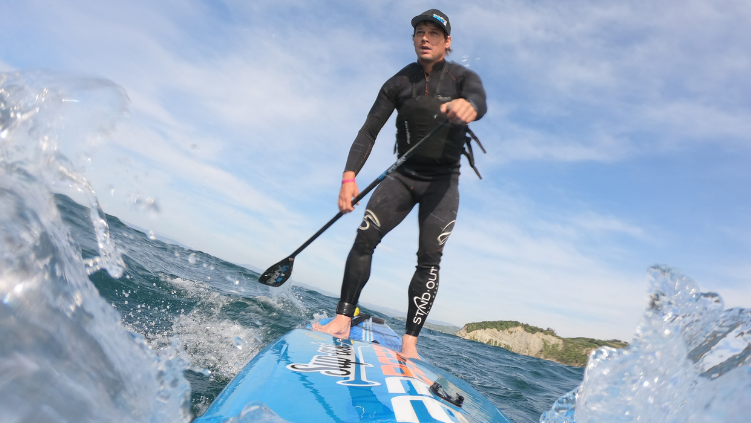 There is this dope story behind my two world records… The Winter Adriatic Sea Crossing was more than 130km of open sea paddling on the coldest weekend of the year. The challenge started in Pola, Croatia and finished on the other side of the Adriatic Sea, in Pesaro on the Italian coast. The Summer crossing sounded too easily achievable, so I decided to go for the more extreme, Winter conditions. The air temperature dropped to around zero during that night. More than 20 hours of side wind and waves added another dimension to that Crossing which took 27 hours, with 23,5 hours of pure paddling. 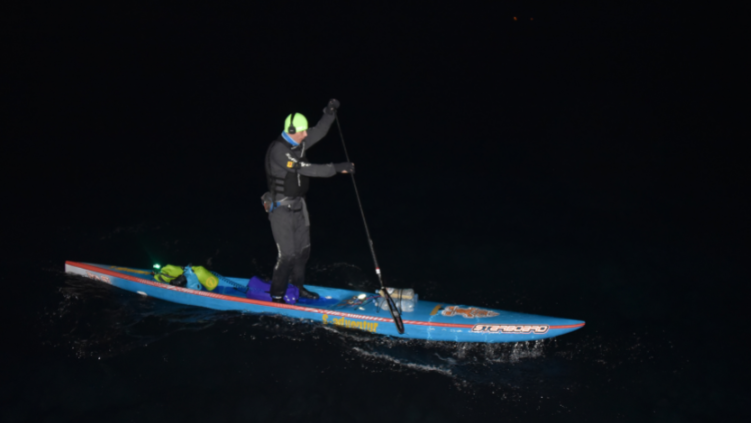 This is also the story about the birth of StandOUT SUP Wear dry suit. The first prototype we worked on was grey colour and still with the old-school vertical zipper but also with amazing
features like “pee” zipper, neoprene cuffs which are super comfortable, leg pocket and completely new shape from all other dry suits on the market. In the second prototype the zipper was put in horizontally above and around hips which frees up shoulders – That solved another huge problem in terms of dry suits… In the third prototype we only changed the colour scheme and with every new generation dry suit gets better and better….

After that crossing someone mentioned a 24h Guinness World Record that was achieved by an American. The plan was to break 200km but with wrong food (sport gels), I just broke the old record and was forced to stop due to digestive problems.

My longest training was 9 hours and I haven’t had any problems with food (sport gels + OH drinks) but 24h is another story for body. After these two records I tested my body on full distance during Ironman and in one of the hardest extreme triathlon events, ICON, and both time I mixed food with small sandwiches, sport bars, OH drinks and results were much better…

Even with two world records in the Guinness Book I’m not satisfied so maybe in few years (when my daughter Zala is older) I will try again to break those 200km… Current official record is 193.8km! 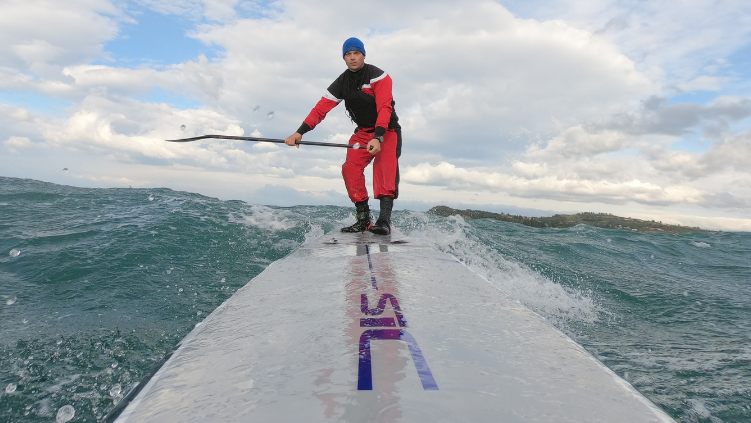 For outdoor activities we have many breath-taking locations between the Alps and the Adriatic sea with still Alpine lakes, emerald-green rivers and some urban paddling in the capital’s Old Town.

As for the racing scene there are 20-30 competitors and we are racing under the ISA National Federation which is recognized by the National Olympic Committee. It looks like Slovenia will have this year representatives competing at both ISA an ICF World Championships.

Let’s talk SUP specific apparel… SUP is increasingly turning into a year-round discipline where the right apparel is paramount when it comes to water safety especially in Winter but also when it gets warmer… What’s your take on that?

Before SUP really kicked off… dry suits were heavy, non-stretchable and non-breathable – Something that nobody really liked but with new materials dry suits are now high-end sport apparel – From 2 to 4-way stretchable, offering 20,000mm waterproofness and 26.000 g/m2/24 breathability. That’s all you need for those hardcore Winter downwinding sessions!

Open Palm neoprene gloves are warm and don’t compromise that paddle feeling providing great grip even in under minus temperatures.

In Spring and Autumn I use AIR Long John which is breathable neoprene to prevent overheating during high pace intervals. This is my most wearable piece of apparel.

In Summer I use AIR surf shorts and StandOut Base layer long sleeve shirt with anti-bacterial lining (odour resistant). I love it! 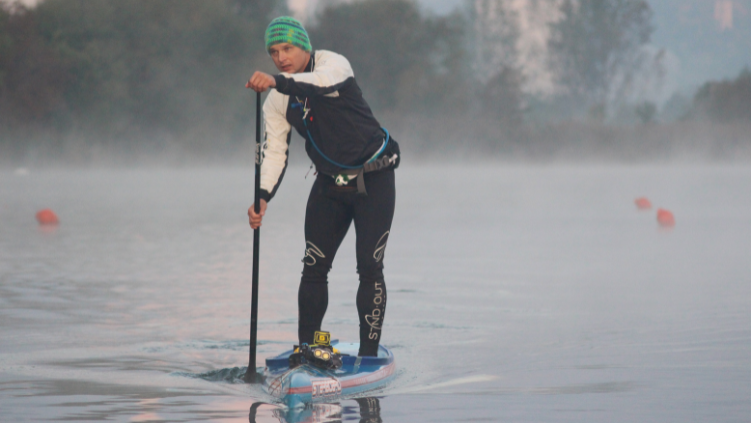 Could you tell us more about your collaboration with StandOut SUP Wear?

Sandi Ljutić, CEO and owner of the company, called me in 2015 if I could help him with the first prototypes. They made the first dry suit for my open sea crossing, during the crossing I already tested the Open Palm Gloves and first prototypes of Long Johns. Later we developed the 7mm boots, Airprene jacket, quickdry shirts and surf shorts… It’s a never-ending story…. I really like to push the gear to the extreme like during those 60knot Winter downwinds. 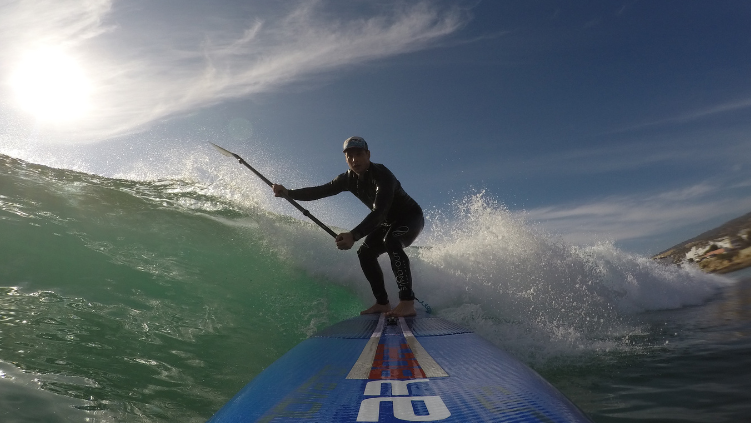 How do you think the sport of stand-up paddleboarding will grow and evolve?

For the first time in a decade we saw the standardization of disciplines (sprint, technical & long distance) which probably opens a new era of racing. Two federations are competing to bring SUP on Olympics. In Europe we have big international races nearly every weekend from May till October and plenty of national options as a back up plan. It looks like fresh wind is blowing with full force on the SUP racing future. The only thing I miss is standardization of equipment and more races on inflatable SUPs. With all the technical races this season there will not be many race boards without cracks and holes at the end of the season.

My plan is to compete in the 2022 ISA National Championships, ICF World Championships in Gdynia, the EuroTour Grand Slam and… build a hollow carbon flat water rocket for 2023 season.

Thank you for your time and good luck with the 2022 season! We’d like to be first to see that rocket!

*All images courtesy of Rok Puvar 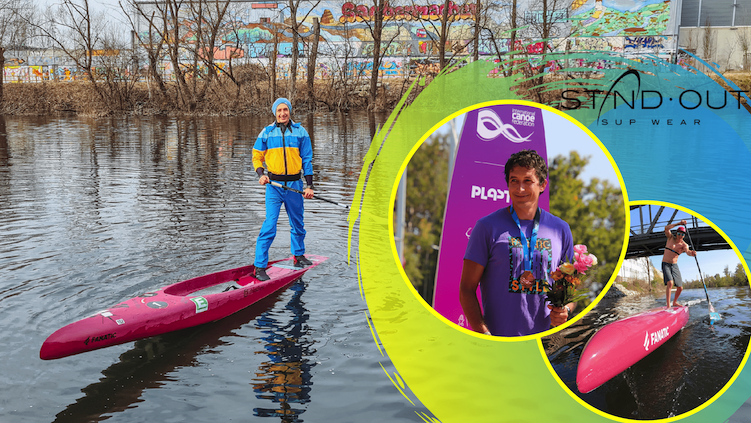 What makes riders, pro athletes and coaches stand out on today’s SUP scene? Infinite enthusiasm for the sport of stand-up paddleboarding backed by knowledge (that they’re willing to share with their communities), technical skills and an uncompromising approach to quality. Christian Taucher’s (aka Chris Diver) social media presence bursts with SUP stoke, dedication to the growth […] 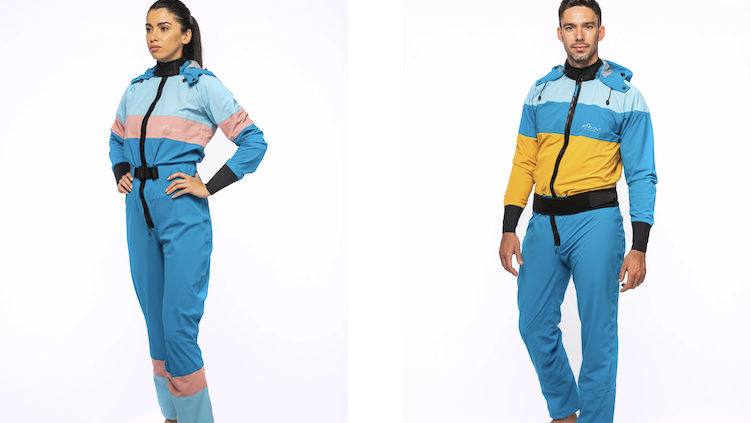 Five years ago, Slovenian watersports clothing manufacturer Sandiline had the vision to launch a SUP-only brand, StandOut SUP Wear with one idea in mind, equip year-round stand up paddlers with top quality gear. Withing a few years, their drysuits used and recommended by some of the best paddlers in Europe, have already made a name […] 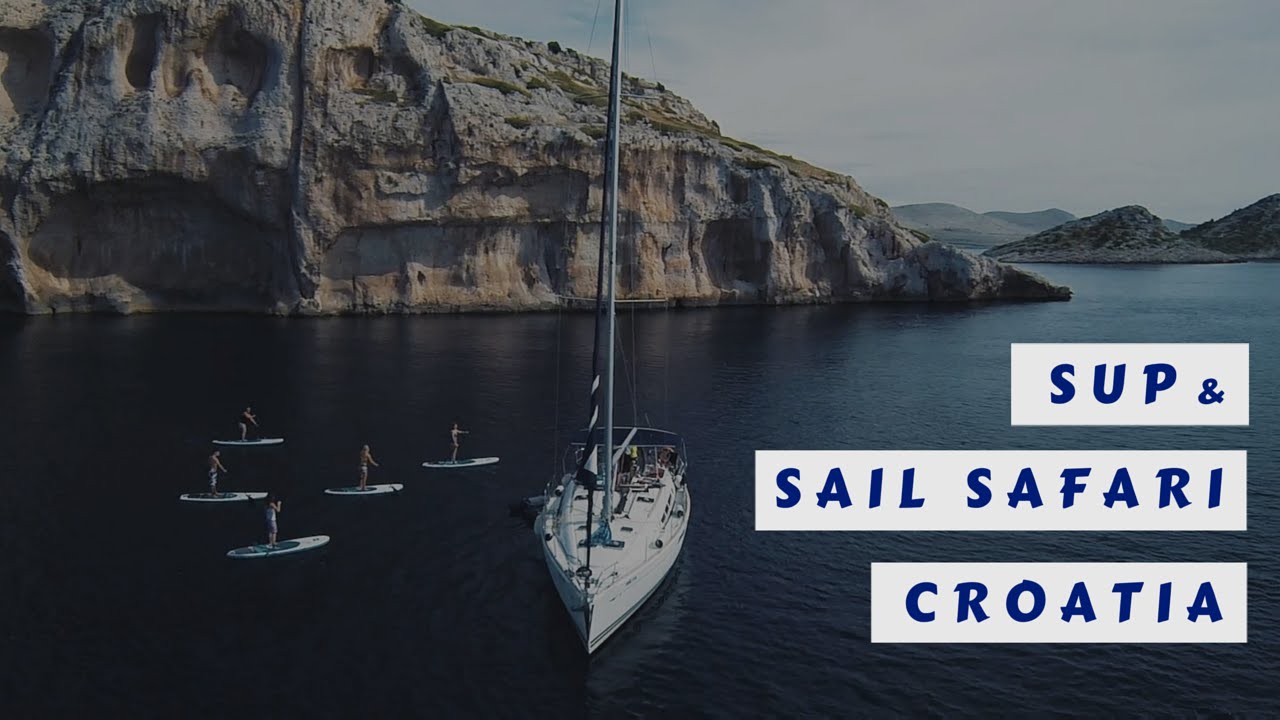 New SUP Destinations: Stand Up Paddle in Slovenia and Croatia

Slovenian Kite surfer and Stand Up Paddler Spela Zupanc caught our attention with a beautiful video of one of her SUP & Sail Safari trips to neighboring Croatia. This was a great opportunity for us to start discovering new SUP destinations. Hi Spela, can you introduce yourself to our community of paddlers?  I am Spela, […]