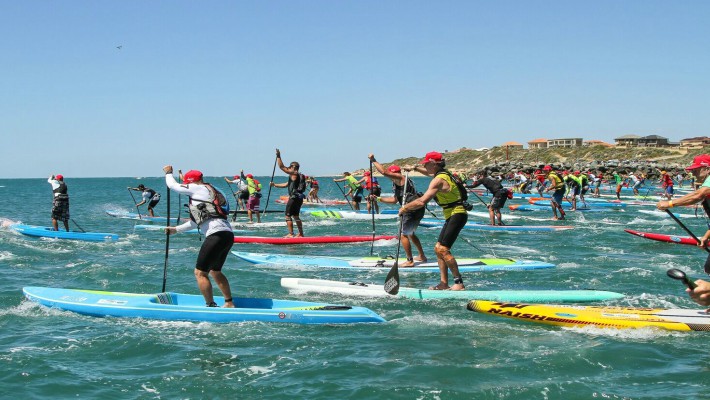 There is just one month to go before Australia’s most prestigious Stand Up Paddle (SUP) race and the word’s fastest downwinder, the Stand Up Surf Shop King of the Cut, gets underway.

New events have been added to the SUP festival weekend to help those new to downwind SUP hone their skills: Clinic with Michael Booth, Express Two Storey Living Djeridjinap Run with Travis Grant and Terrene Black, and SUP Yoga and Mandurah Canal Tour.

King of the Cut Chairman Greg Kerr announced earlier in the year that the Stand Up Surf Shop King of the Cut would offer equal prize money for male and female competitors, the first major international Stand Up Paddle (SUP) event in Australia to do so.

King of the Cut Chairman Greg Kerr said the event committee has listened to feedback from female competitors regarding board classes and motioned change as a result.

“The majority of females voiced a preference for a 14-foot class for the Female Pro Class, from an initial interest in possibly going Open Board Class (Unlimited and 14’) this year. There is still an unlimited Female Class but this class won’t be eligible for the major prize money,” Kerr said.

“Regardless of class, the first female racer across the line will receive $500.”

“We are very proud to be able to reward all competitors equally and lead by example in Australia by being the first major SUP event to do so.”

Kerr said the female board class would be reviewed again for 2018.

King of the Cut is set to attract about 160 top local, interstate and international competitors.

The Stand Up Surf Shop King of the Cut is a 24-kilometre race will take place on Saturday 2nd December 2017 in Mandurah.

Competing for world tour points or state representation, King of the Cut competitors will start at The Dawesville Cut at Port Boulevard and finish at Secret Harbour. The King or Queen of the Cut title and will be awarded to the first paddler across the line, regardless of board class or age. 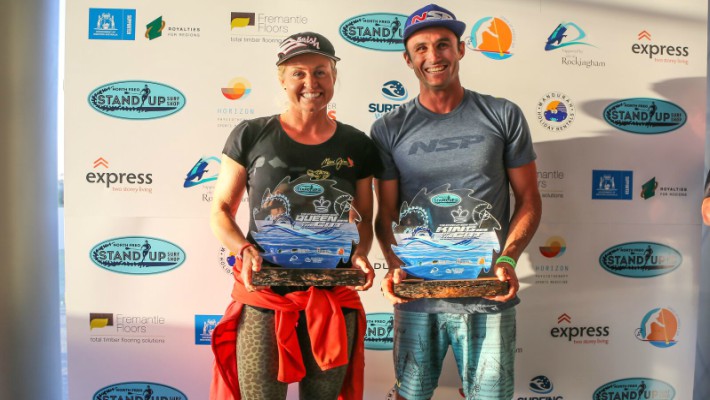 About Stand Up Surf Shop King of the Cut

The Stand Up Surf Shop King of the Cut has a two-day window for the best conditions – Saturday 2 December and Sunday 4 December. The Half Cut will move from the Sunday to the Saturday if the main event is held on Sunday.

Spectators are invited to watch competitors start the race at Dawesville Cut and to cheer them across the finishing line at Secret Harbour. Entry is free.

Competing for world tour points or state representation, the Stand Up Surf Shop King of the Cut competitors will paddle 24 kilometres starting at The Dawesville Cut at Port Boulevard and finishing at Secret Harbour. The King or Queen of the Cut title will be awarded to the first paddler across the line, regardless of board class or age, however, only competitors paddling 14-foot boards are eligible for prize money. 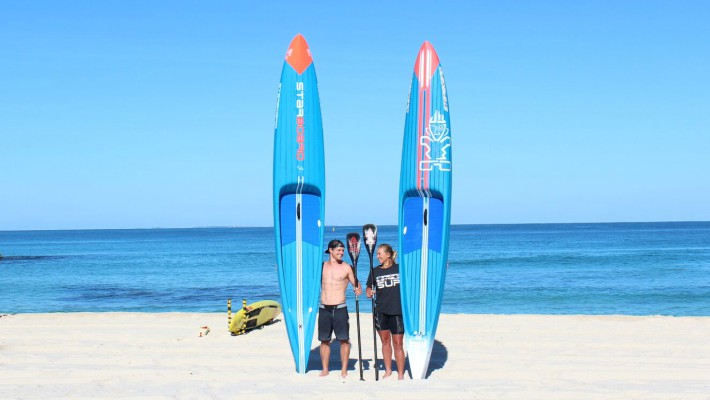 The Express Two Storey Living Jeridjinap Run – a short 5km paddle to Central Mandurah down the Estuary. It’s a great opportunity for novice paddlers to gain experience while being chaperoned along the course by professional paddlers. Finishing with a sundowner and dinner in Mandurah as a prelude to the KOTC. Exclusive clinics run by World champs Terrene Black and Travis Grant.

The Starboard Half Cut – a shorter 10km race. This event will be held on theSunday, the day after the main race. This is a great opportunity for a downwind paddler of medium level to participate and experience the thrill of Western Australian Downwinding. The Oceanside run is the first half of the famous KotC run, fantastic medium to large runners to propel paddles down the Peel Coast.

Open Board Class For Prize Money – With the popularity of the Unlimited Class and listening to feedback from the Pro Riders, there is now a Male and Female Open Board division* for the Pro Class – the first 5 male paddlers across the line and first 3 female paddlers, regardless of board length (14′ or UL) will take out the prize money. An Unlimited board has yet to win the KotC, the technical nature of the course seems to even out the board lengths.

Foiling Class – the KotC will open up a foiling division as a demonstration class for 2017. Whilst this division won’t compete the Open Prize money (or theline honours KotC trophy), Enviroplumb has kindly sponsored a $500 cash prize for first Foiling Board across the line.

Outriggers For The Cut – Last year, Outriggers (OC1) were invited to compete in the King of the Cut. The Outrigger community shares similar values to the SUP community and having this traditional craft involved in Australia’s Premier SUP Downwind Event is a great addition. Welcome onboard Outriggers!

First prize is $4,000, second prize is $1,750 and third prize is $1,200 for male and female professional classes, as well as a first-across-the-line bonus of$500. In the male pro class, fourth and fifth placed racers will receive $800 and $600 respectively, bringing the total prize pool to $18,300, making it the largest prize purse for an SUP event in the country. 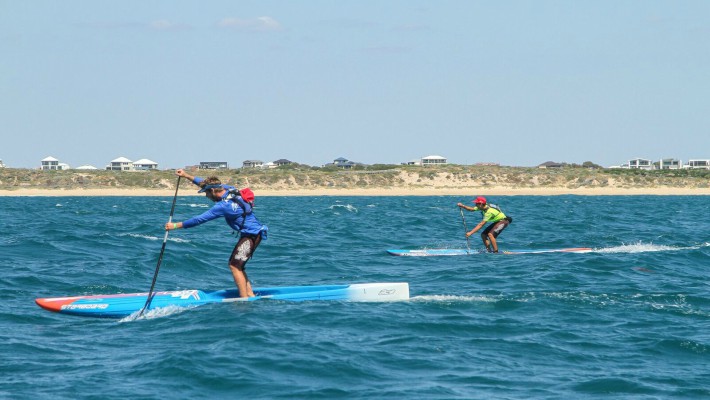 The Express Two Storey Living Djeridjinap Run and SUPWA SUPer Clinic is a social downwind run held on Friday 1 December from 4:00pm on the protected waters of Mandurah Estuary.

Two world champions Travis Grant and Terrene Black will be on hand to help intermediate paddlers with downwind technique. It’s a free event for SUPWA members, and membership to SUPWA is just $25.

Prepare for the day with a morning SUP Yoga. Supported by the Stand Up Surf Shop, specialised Yoga SUP boards will be available and an instructor will lead participants through blissful postures in nature and in balance. After SUP Yoga, take a guided tour along the picturesque canals of Mandurah learning SUP technique.

Free event for SUPWA members, and membership to SUPWA is just $25. 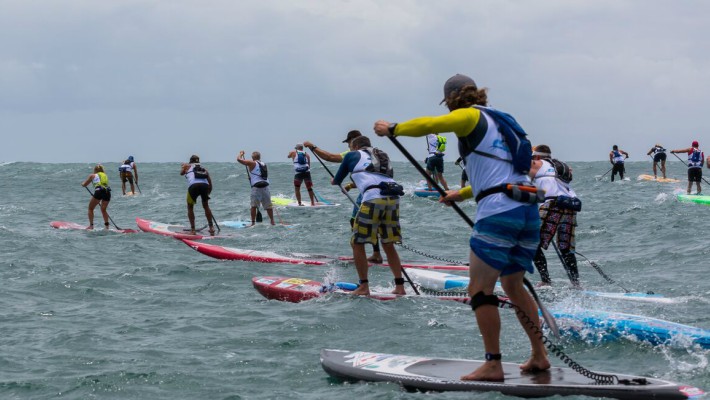 26 November – The Super SUP Clinic, the biggest gathering of SUP paddlers in Australia and an opportunity to lean from the best SUP athletes in the world.

29 November – Triple SSS, a mid-week 11km SUP race downwind from Port Beach to City Beach alongside top paddlers from around theworld, followed by a social get together at the City Beach Clubhouse

2 December – Stand Up Surf Shop King of the Cut, (or Sunday 3 Dec) – the biggest and most prestigious SUP downwind race in Australia that attracts the world’s best to race 24km from TheDawesville Cut to Secret Harbour

3 December – Stand Up Surf Shop Half Cut & Sea Rescue Gratitude Run, (or Saturday 2 Dec), 10km downwind race, the first half of theKing of the Cut course from the Dawesville Cut to Mandurah.