After winning the last two legs of the Stand Up World Tour, Sean Poynter spent a week of vacation in Barcelona with Mathieu Rauzier, the Starboard designer and enjoyed touring the city, meeting the local paddlers and trying the local food.

Hi Sean, what brought you to Barcelona?

After the Stand Up World Tour Location X leg in Morocco, I had some time to kill before heading to the Starboard HQ in Bangkok with Mathieu Rauzier and further work with him on the Starboard 7'4″ x 25.5″ for 2016. So Mathieu invited me over in Barcelona and it turned out to be an awesome week layover where I got to meet the local paddlers, enjoy the local food and a bit of nightlife. 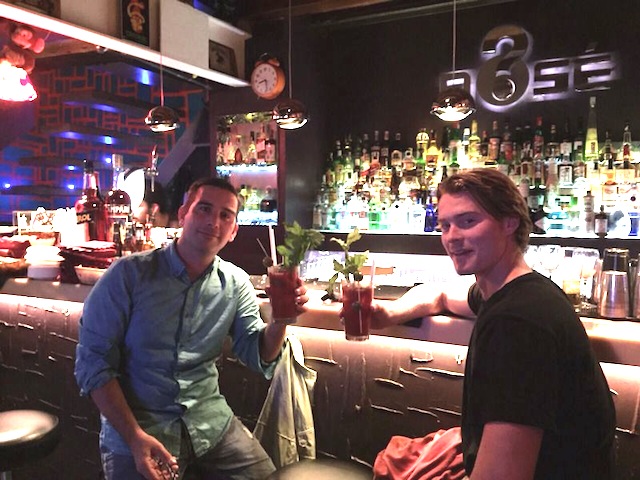 The best Bloody Mary in town – Mathieu Rauzier's favorite drink and bar, the No Sé bar in the Borne quarter.

Who did you meet in Barcelona and what did you do ?

I met so many people there! Almost too many to memorize all their names.

First of all, Mathieu introduced me to local Starboard dealer and SUP instructor Marc Foraster from SUP Barcelona who picked me up and my boards at the airport and organized a little SUP trip for me to a beautiful nearby town Sitges. 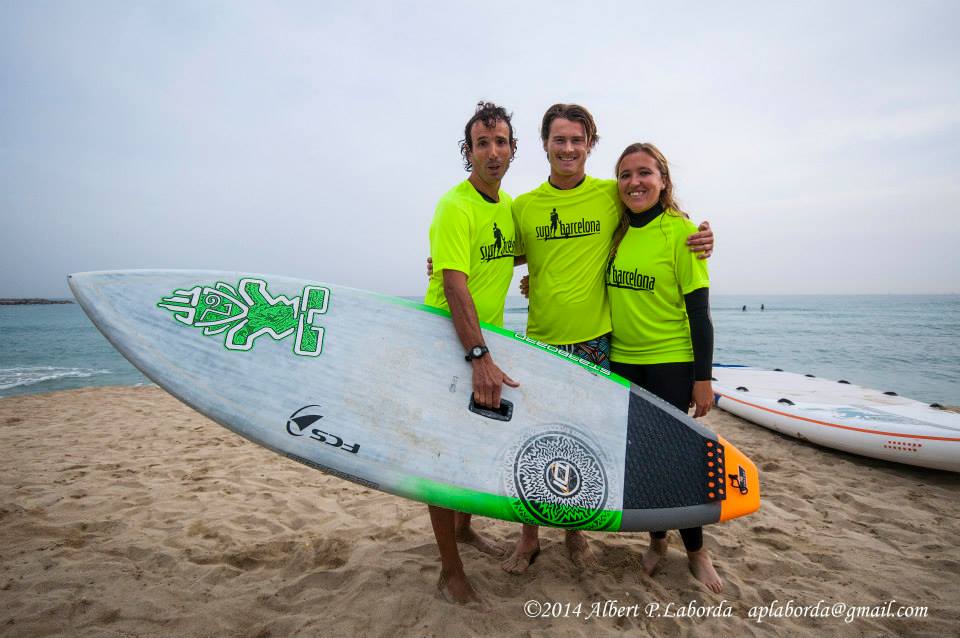 Then Matt from TotalSUP – of course hehe – and Miquel Roige who runs a SUP club in the Barceloneta quarter, in the heart of the city, the Molokai SUP Center. Miquel lent me a board for a couple of paddling and downwind sessions with him and Mathieu Rauzier. 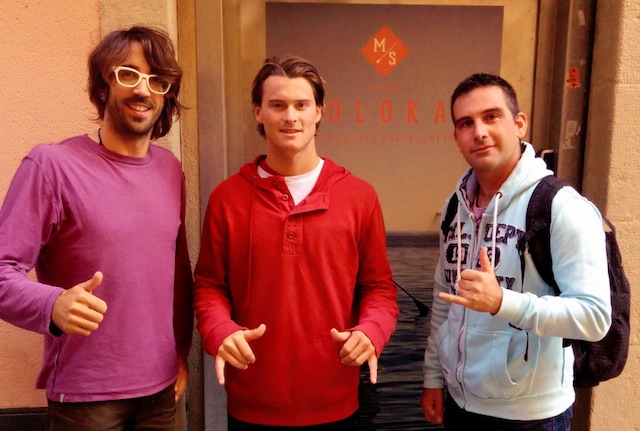 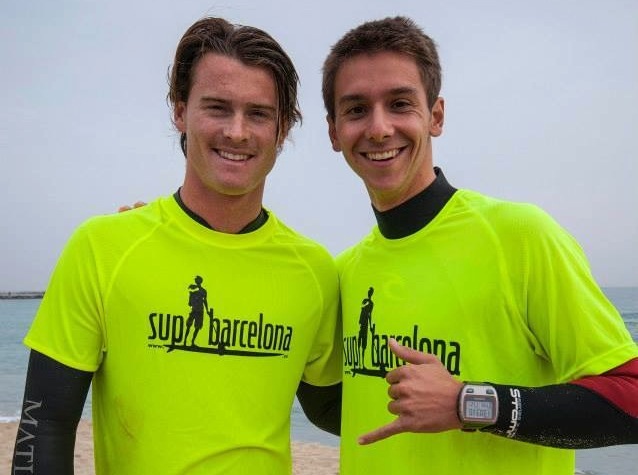 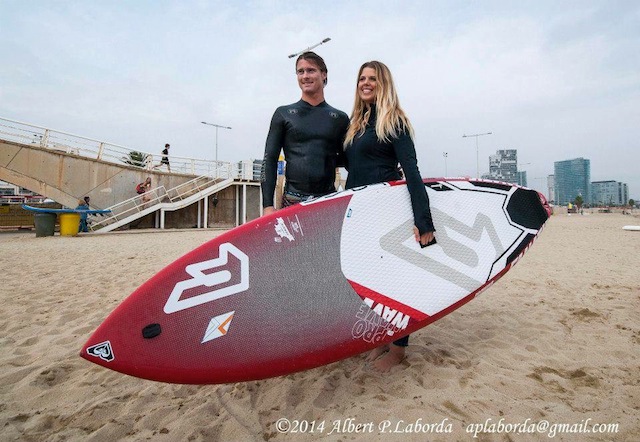 And many more, everyone was so rad.

What did you think of the local Barcelona SUP scene ?

I have to say the local SUP scene impressed me! I wouldn't have thought there would be so many paddlers in Barcelona! Thanks to SUP Barcelona, we organized a last minute SUP surf clinic with a turn-out out of over 20 people. It was really a great time paddling with everyone and seeing the community of SUP that Barcelona has. Fun little waves too, I would love to see that place when it gets good. 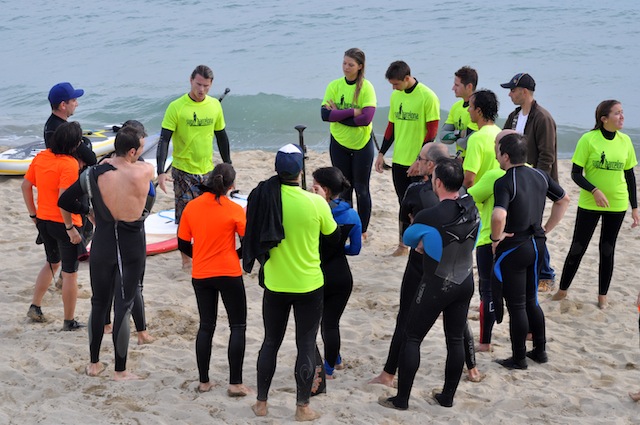 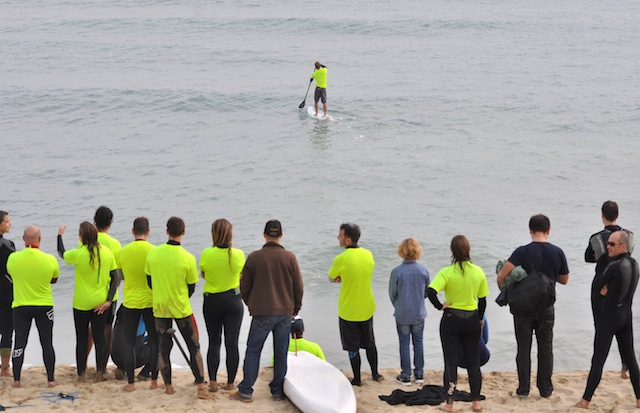 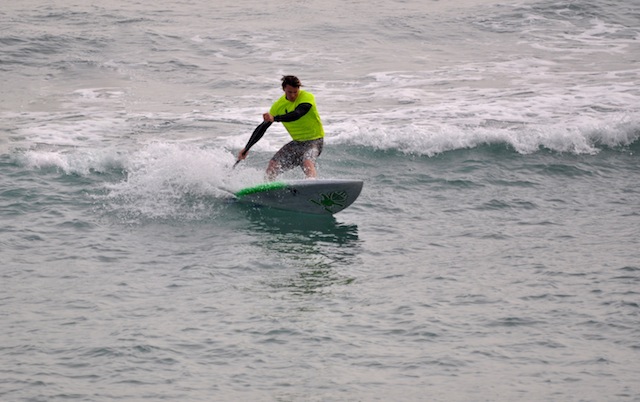 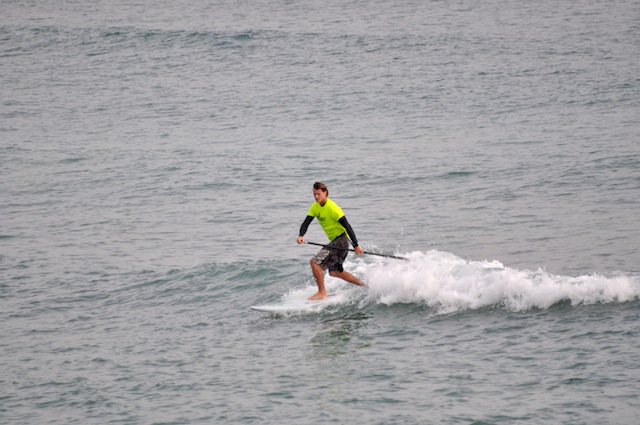 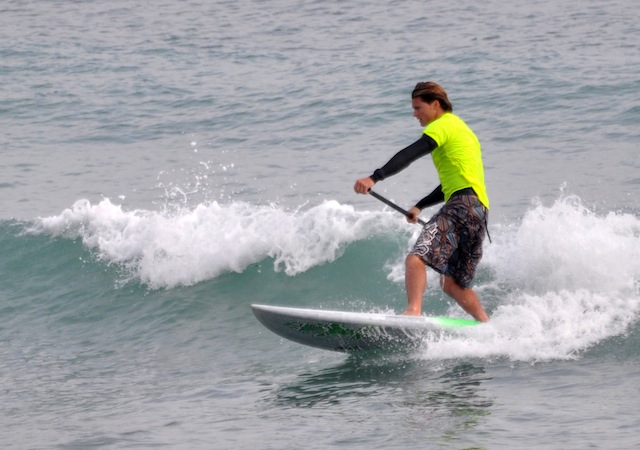 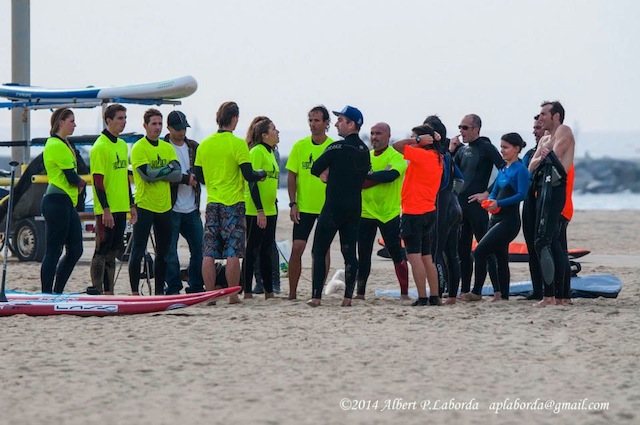 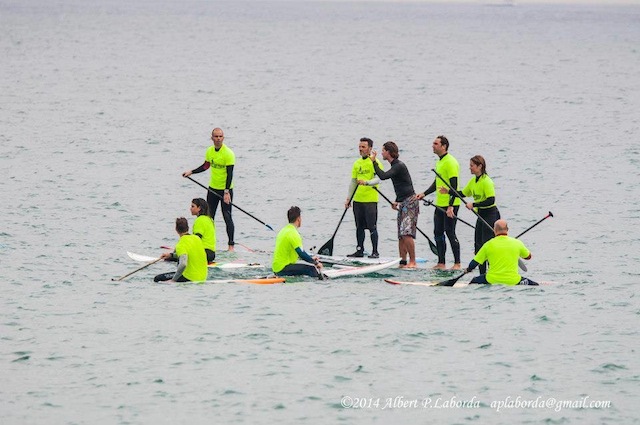 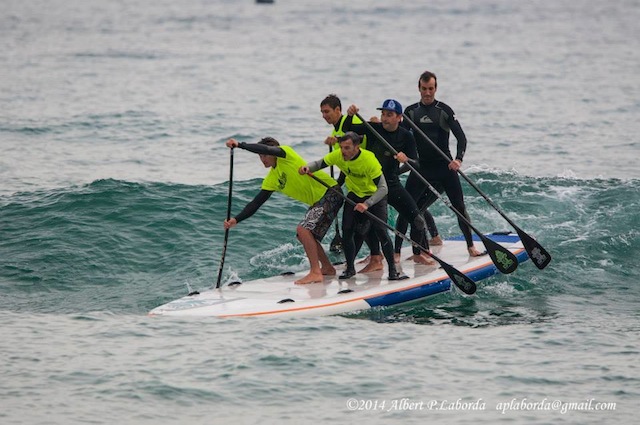 What other memories do you bring back from Barcelona?
I loved the food! And I tried to have a taste of as many different dishes as I could. Mat Rauzier was a good guide. The pics speak for themselves… 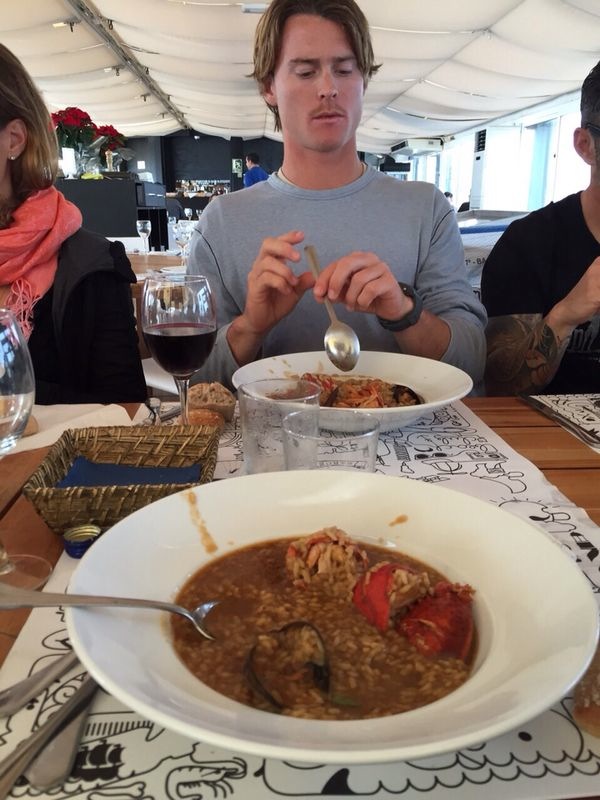 Arroz con bogavante.. mmm is this really what I ordered? 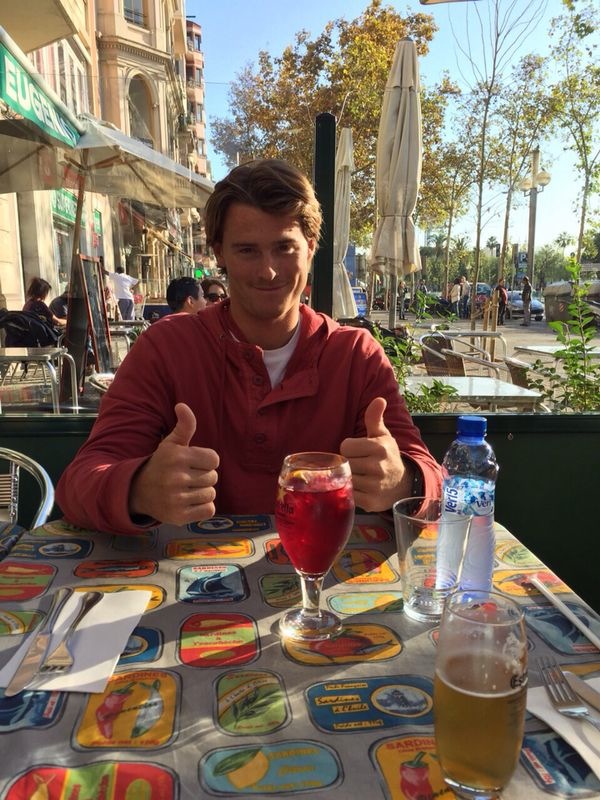 Nothing can go wrong with a glass of sangria… 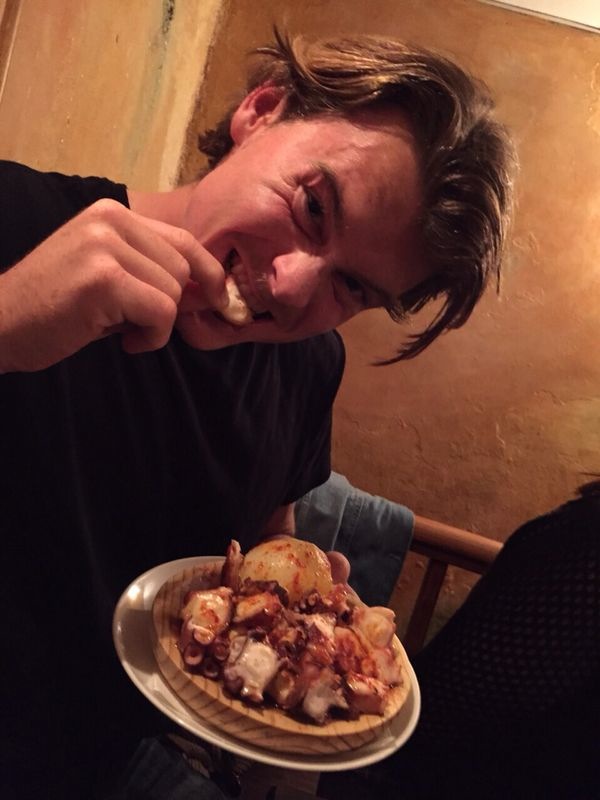 Everyone's telling me to try Pulpo a la Gallega, surely it must be good ! 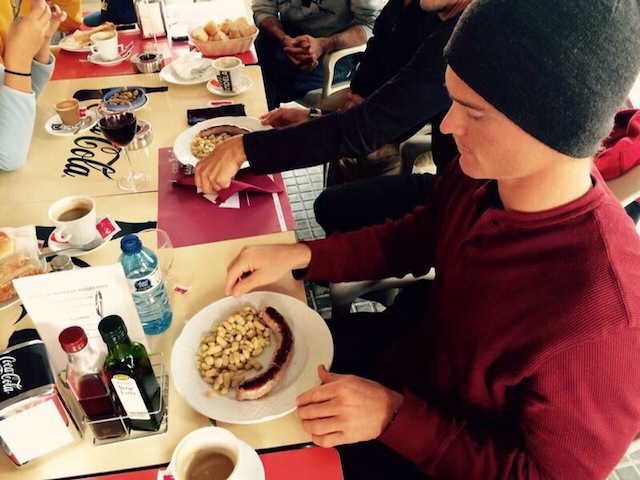 Butifarra con judias for breakfast? Ok, maybe that's a little too much…

How did you feel winning the last 2 legs of the La Torche and Morocco. Are you happy with your 2014 season ?

This felt wonderful. I was looking to get a win all season – a couple actually – and to nail the win at the last event of the year at La Torche, I couldn't have been happier. It was a really satisfying feeling. Like, “finally”. It was good. Then to follow it up in Morocco with another was just all that much better. Like the second cherry on top. It was sweeeet.

Can you describe your board for 2015 and the type of work you are conducting with Mathieu Rauzier on it?

The board for 2015 is a board Mat and I have been working on for some time. It's a board created with the idea that it would allow any rider to be able to step up their riding performance with increased speed and manoeuverability, the board is the 7'4″ x 25.5″. You will find the 2015 board to be the same high quality performance board that Starboard had in 2014 -the design didn't change – but with just different graphics. Graphics that are actually my favorite by the way out of all the years graphics I've seen. The board that Mat and I have been working on most recently is the updated 2016 model of the 2014 and 2015 board. The board is riding good, however it still needs a little work for it to be qualified as a Starboard production board. 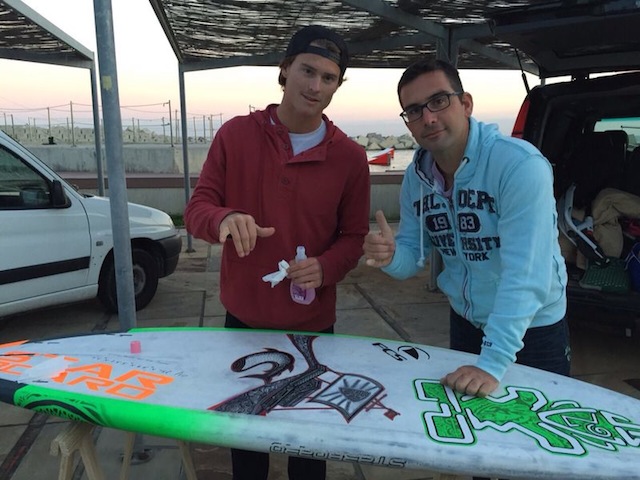 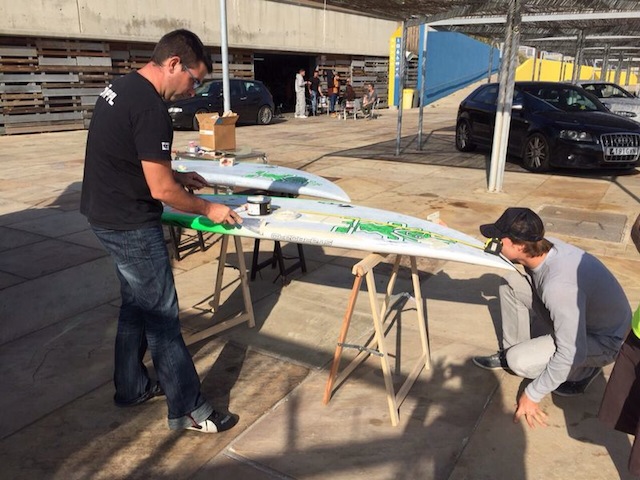 Mathieu Rauzier and Sean Poynter working on the 2016 board at the SUP Barcelona club in Forum, Barcelona.

After Thailand, where I am now, I'm going to go back home to California for a week and then go to Florida to visit my family and friends for Christmas and New Years. The place where I grew up, my home home. I can't wait. Counting the days actually.

The plans for 2015 are to further push my level of riding and the equipment I'm doing it with as much as I can, as well as making some really great content that everyone will enjoy from SUP beginners to experts and everyone in between. I'm going to compete at some really cool events and am making plans right now for some awesome travel trips. It's gonna be good! 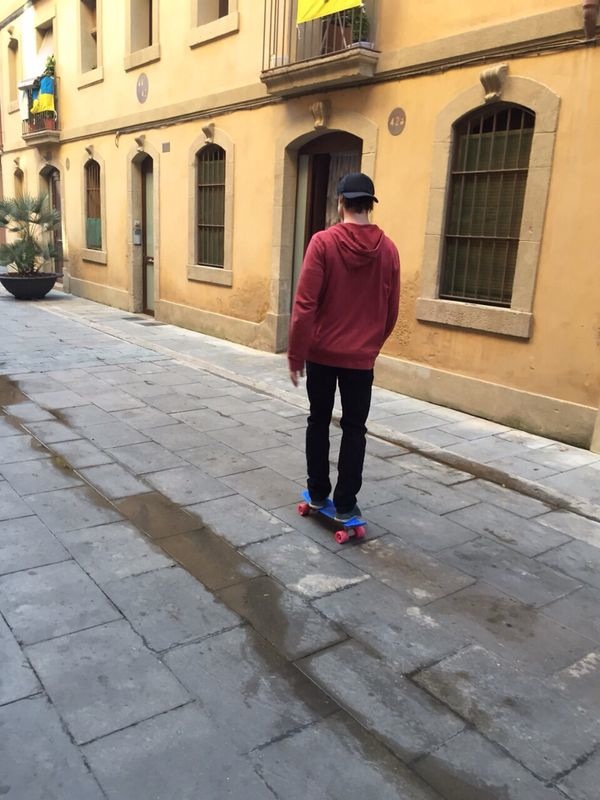 Sean Poynter with Mathieu's 7 year old son's skateboard… bye bye Barcelona ! Thanks for everything and see you soon!