We are starting this new year with a thorough look at river SUP, which has experienced a huge growth in popularity worldwide over the past two years. Dan Gavere, whitewater stand-up paddle pioneer helps us decode this growing phenomenon. 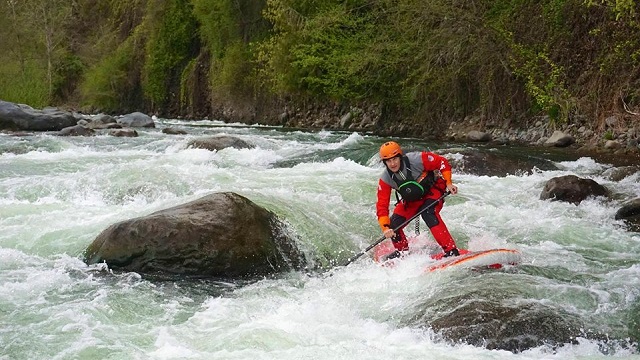 Hi Dan Gavere, first of all, can you please remind our readers who you are?

Dan Gavere: I’m a former professional whitewater kayaker with an injured back. When I first heard about SUP I purchased a board and paddle before ever trying it. After the first few strokes without back pain my passion for paddling was restored. I felt excited about the new challenge and started paddling whitewater every chance I got. Now I am an International Starboard Dream Team Athlete and board designer who is in love with this amazing sport and passionate about introducing it to others. 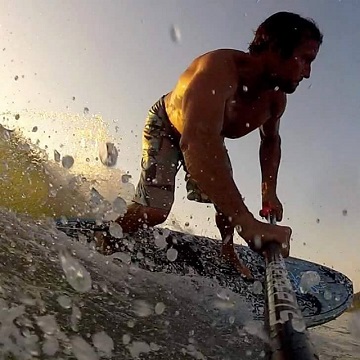 Dan Gavere: “River SUP” or “Whitewater SUP” is an amazing experience, and for a few years I thought it would only be me and a few other people around the country paddling with our kayaking buddies. At first it looks awkward but as anybody knows who tried it the feeling you get from the connection with the paddle and board to the water is really cool. Now to my surprise people are starting to get into it all over the world, and we’re seeing growth. The first signs I could see of the sport gaining traction were with social media thanks to a few individuals who were sharing their whitewater SUP experiences. As the whitewater specialist for the Vail Mountain Games I was given the opportunity to introduce SUP whitewater to the lineup of events offered in 2010. I was enthusiastic about the number of competitors we received in the first year with over 40 people racing. The growth we’ve had not only in terms of athletes but also in the number of events now being offered for whitewater SUP is encouraging. Over the years we have seen the sport popping up in many other countries that have great whitewater paddling. Places including France, Austria, England, Germany, Switzerland, Japan, Canada, Chile, and New Zealand.
Since the sport started it has come a long way here in the USA thanks to events like the Go Pro Mountain Games and The Payette River Games (2014-2015) which offered large cash prizes to attract some big names in the sport to the river and helped increase Whitewater SUP’s visibility.

In what is it different from any other form of SUP practice?

Dan Gavere: It’s such an amazing experience that no matter how many times you do the same river you can always make it different by taking different lines and trying new tricks. Some of my local “hometown runs” that I have paddled hundreds of times I can still get excited to paddle. River surfing is also bringing in new people to the sport because they want the thrill of surfing without having to go to the ocean and look for good waves. 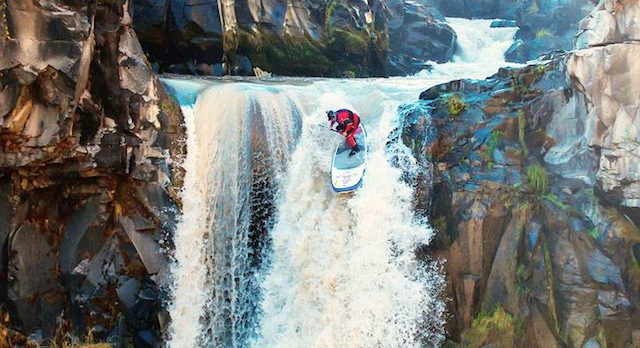 As far as the gear goes it is the most intensive of all the different aspects of SUP because of the necessary items needed to be safe and secure. These include a wearable life jacket/PFD and helmet at the very least, and this is standard for any whitewater sport. I highly recommend good footwear like river shoes or running sneakers as well as knee and chin pads which have solid straps and/or sleeves which help hold them on during prolonged swims. Obviously the water can be much colder than your typical flatwater paddling spot, so wetsuits and drysuits are also very common and highly recommended for cold water destinations and in locations where the sport is growing the quickest like in the mountains. Most of the best rivers are fed from snowmelt so the water is going to be cold.

The dangers in Whitewater SUP are the same as they are in rafting and kayaking and include obstacles in the river like trees, rocks, undercuts and hydraulics. The leash can also be dangerous if attached to the ankle like you would in the ocean for surfing waves. There are many whitewater specific leash systems on the market and safe practices to use a leash in whitewater, and people new to the river should educate themselves on these by seeking advice from whitewater professionals. Knowing the river section, where to get in and get out, where the rapids are and the routes through the rapids are the keys to successful sessions. Always paddling with others who know the river and what to expect is the best possible way to learn the sport.

Who is it for? Where do you start?

Dan Gavere: Whitewater SUP is for anyone up for the challenge of trying something new and exciting. We are seeing experienced rafters and kayakers looking for ways to make easy sections of their local rivers more fun by trying it on a SUP. Snowboarders and skiers are getting into it as a way to continue to ride a board in the mountains after the ski resorts close. Interestingly there has been a large percentage of women entering the sport who enjoy the advantages of SUP over whitewater kayaking because of the freedom it offers in a less intimidating way compared to kayaking where you have to learn the hardest thing first-eskimo rolling. 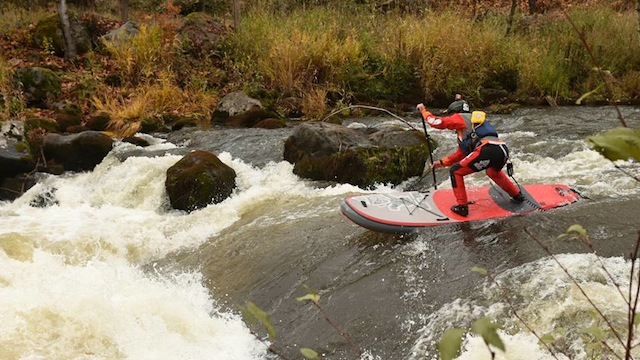 Who are the big names in the world of River SUP?

Dan Gavere: Some of the notable names I have seen ripping since the sport started in the USA would be people like Mike Tavares, Corran Addison, Spencer Lacey, Miles Harvey, Rebecca Giddens, Charlie and Jenny MacArthur, Ken Hovie, Matt and Erin Koch. There are lots of athletes from other countries too like “Cosmo” Klaus, Toby Huther, Carsten Kurmis, Masayuki Takahata, Tsuyoshi Miyake, Peter Bartl, Nicolas Fayol, The Stretcher Brothers, and many many more. Some athletes like Dane Jackson and Nick Troutman who are World Champion kayakers are also participating in both kayak and SUP disciplines at events when they can. 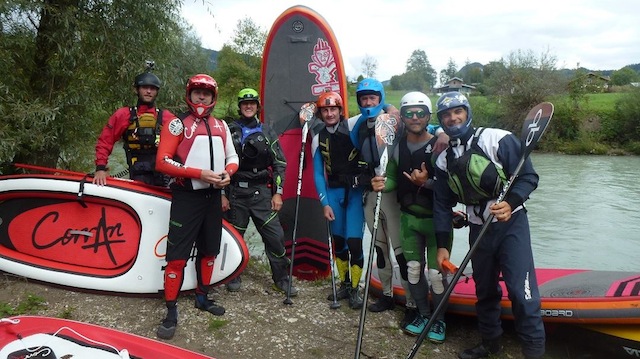 What brands are involved and what type of specific boards are available on the market?

Dan Gavere: The board designs are very exciting and there are some different types of constructions now all with their own advantages and disadvantages. My personal favorite is the Starboard Stream Inflatable Series which is my signature whitewater line of SUP boards and comes in 3 different sizes to accommodate all sizes of paddlers. More importantly is the fact that we have some great options these days for whitewater specific boards. From thermoformed boards to composite and plastics even some new inflatable composite designs. I am excited to see all the new innovations and options there are out there for the sport. Generally the size that most people are finding work well for getting into the sport are boards in the 9-10 ft range and a minimum of 33 inches wide with lots of volume to stay up on top of the water. The Starboard Stream 9.6 x 36 x 6 inches and has removable fins and very durable fin boxes which is which allows me to paddle with or without fins in shallow rivers, and gives me a way to tune the tracking and turning performance. Where I live we paddle without fins often because this allows us to take more shallow lines and paddle rivers and creeks with much lower water volume. 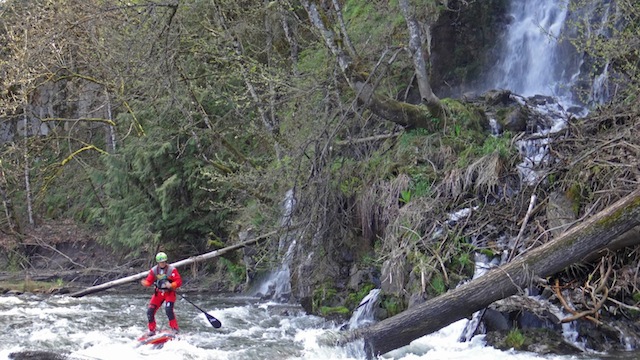 Are there any River SUP race circuits in the US, in Europe?

Dan Gavere: There are several independent events that are really cool and a lot of fun. Some of my favorites include the GoPro Mountain Games and Fibark in Colorado. Internationally the Outdoor Mix Festival in France and the Bavarian Whitewater SUP Championships in Austria are starting to grow and attract more paddlers as well. I am seeing some of the kayaking events opening their doors to SUP divisions and I believe this is another factor in helping the growth of the sport. Of course the media features the unique images that are being created on the rivers because of the diversity and dramatic landscapes. The essence of SUP is paddling in nature and some of the most compelling images for me in sport are the shots on whitewater rivers with mountains and clear water. 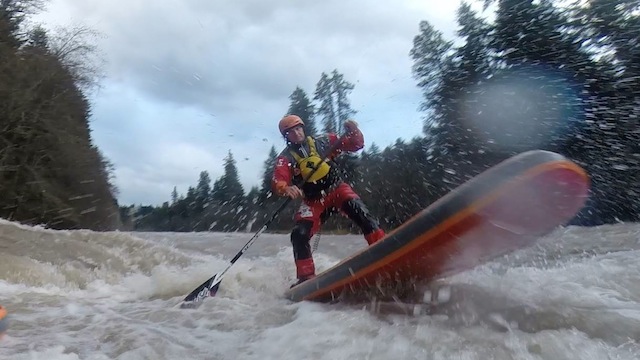 So what does the future hold for Whitewater SUP?

Dan Gavere: I think many more of the man-made whitewater courses being designed will be for SUP paddling rather than just kayaking and rafting. I would love to see the sport become an Olympic event someday. Whitewater SUP racing is exciting to watch and has that “X Games” factor where the athlete is either killing it or crashing into the water, it’s an all or nothing kind of spectator sport which makes it really fun to watch. Hopefully we will see the more coverage of events in the future as it is not televised currently many people don’t even know that we can paddle SUP boards down whitewater.

Thank you to TotalSUP for the awesome opportunity to talk about something I am so passionate about. Check out my clinics on rivers around the world www.dangavere.com.

I would also like to thank my sponsors, friends and family for all of their support.
Starboard SUP
Astral Designs
Outside Van
Urban Ocean SUP
FCS SUP