A day of Sprint Racing in and out of the surf here in Long Beach NY, with the world’s finest stand up paddle athletes results in a day of non-stop adrenaline and excitement! In the end,  it was Denmark’s Casper Steinfath and Florida’s Seychelle who were crowned champions of the Sprint at the NY SUP Open.

The day of Sprint racing began with a spectacular sight out in front of Skudin Surf as the APP World Surfing Tour athletes free surfed out in front, whist the Tour’s racing athletes warmed up catching waves on raceboards before their first heat. If that wasn’t enough, the WSL Pro Longboard event had rolled into town, the showmanship and level of surfing presented in the 2-3 foot clean swell with off-shore winds was enough to stop anybody on the boardwalk in their tracks. It was quite a scene.

The APP’s signature “M-shaped” course launched racers through the surf zone to the first buoy, for a right hand turn. Then, a sprint back to the beach where they would – with board in hand – run through the APP arch, race back out through the break to the second left shoulder buoy turn before they rode the swell back to the beach for a sprint finish. This unique racing format offered multiple upsets, missed waves and crashes to make for an afternoon’s intense racing scene.  In short, it was quite a ride. 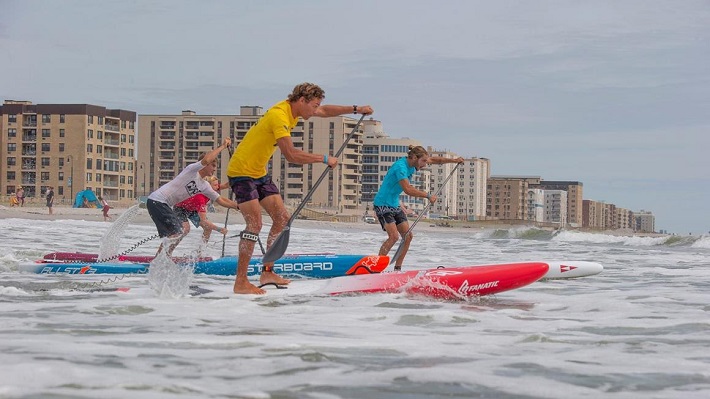 It was clear from the beginning that Denmark’s Casper Steinfath had his sights set on victory. But giving chase and a lot of possibility included Connor Baxter who is looking fit and strong after his gold medal win at the Pan American Games in Peru a few weeks ago. France’s Arthur Arutkin also clearly wanted to protect his 2018 APP World Title from the Dane with a powerful presence throughout the day.  And, into their midst, exploded Martin Vitry who’s notable strength and stamina kept him close on the leaders throughout the event.

The First Round began the action with the men’s finishers sprinting through the APP arch with times of 4:30 (Casper Steinfath) and 4:40 (Arthur Arutkin), but Martin Vitry threw down the challenge and dropped the heat scores dramatically with his 4:07:85 finish. We knew the heat was on. The Quarter Finals saw Connor Baxter and Michael Booth go head-to-head in a dramatic round of close triumph as the two bumped boards throughout the race course until the final wave to the beach which ended in Connor’s win over Boothie in a foot race up the sand. Connor’s final time:  4:03:07.

Next, Casper Steinfath raced his Quarter Final heat at 4:07:11 over Guillerme Dos Reis and Noic Garioid who had such an outstanding performance at the London SUP Open. However, vast ocean experience and open water skill gave the Dane the edge to put him out in front for the win. 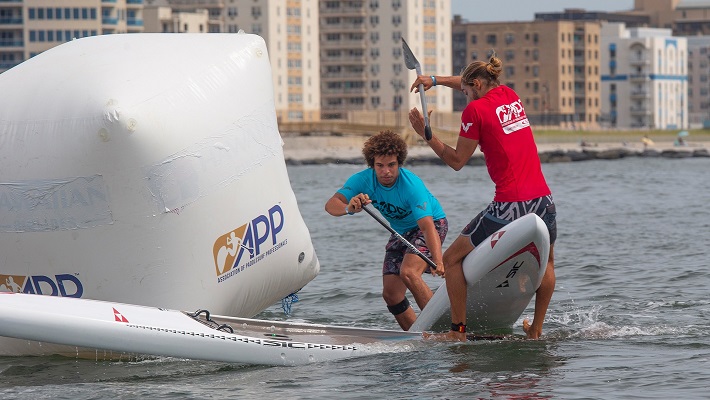 In his Quarter Final heat, we saw young Christian Anderson dominate the course with a searing 4:07:02 to advance. And in the final heat, Arthur Arutkin held off David Leao and Martin Vitry with a 4:04:24 to move into the Semi Final Rounds.

Advancing into the Semis, Connor took down a stacked heat with Casper, Guiherme and Michael Booth and dropped the heat scores still further with a 3:50:86 finish looking like the man to beat in the Finals. Arthur Arutkin made sure to triumph in his heat over Martin Vitry, Christian Anderson and Zane Schweitzer in order to advance as well. 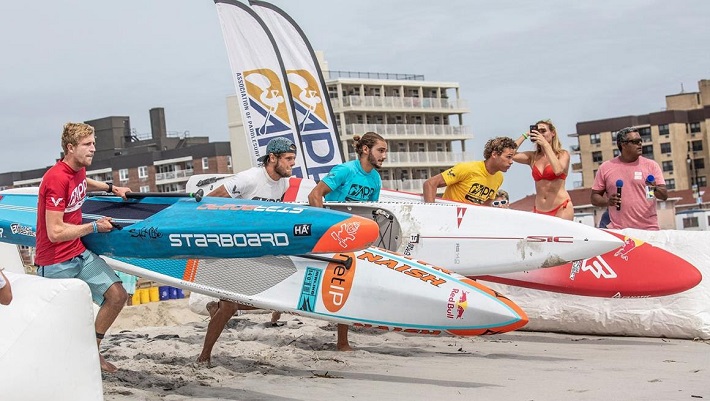 Toes on the sand for the Final and their 4th Sprint Race of the day were Denmark’s Casper Steinfath, France’s Martin Vitry, Frenchman Arthur Arutkin and Connor Baxter from the USA. The horn sounded and all four shot out past the rising swell to round the first buoy. It was any man’s race as Casper reached the buoy first but Connor bumped shoulders in order to get around with Martin and Arthur about a half board length behind. Back to the beach and through the arch, Casper and Connor chased the win. 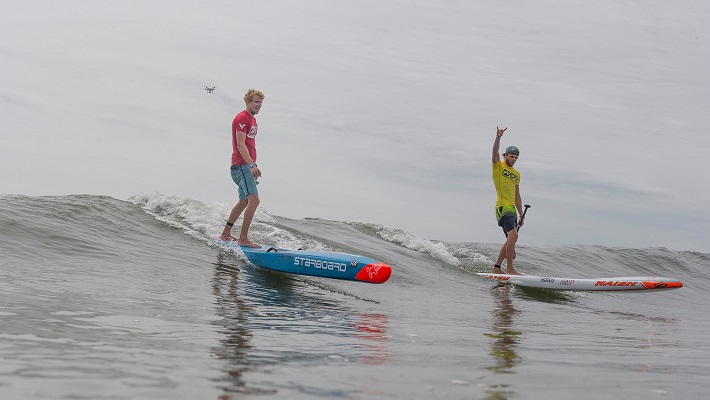 On the final leg, the sprint king from Denmark had edged out some space for himself, but when Connor and Martin caught a small bump out the back, the crowd roared. Casper dug in and lengthened his stroke to stay out in front and get to the beach. Connor became unbalanced and fell off in the surf. Young Martin Vitry gave chase and took 2nd while Arthur Arutkin came charging through the surf to take 3rd place with Connor Baxter finishing 4th.

The fastest heat score for the day goes to Casper Steinfath in the Semi Finals at: 3:50

The Women’s Sprint races showcased a fantastic field of ladies each of whom have the speed and fitness level to become an APP champion. From Seychelle, whose speed and power dominated both the sprints and distance racing at this year’s 2019 London SUP Open, to April Zilg who’s fitness level is at an all-time impressive high, world champion Fiona Wylde who recently won the Columbia Gorge Challenge, Annie Reickert of Hawaii who won last year’s Sprint Championships in a massive show of speed and effort, to Shae Foudy, the APP 2018 World Champion recently back from an abdominal injury that has kept her on the sidelines this year to date. 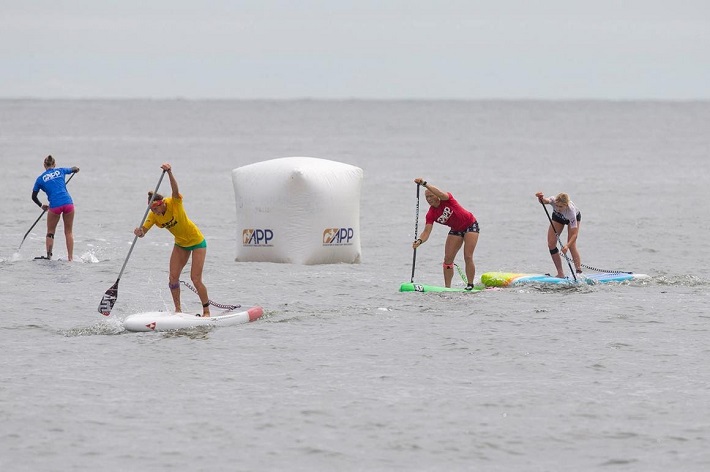 Also present in Long Beach and looking fierce and focused, we saw Yuka Sato from Japan, Giannisa Vecco of Peru, Aline Adisaka of Brazil who also competed in the APP’s surf competition, Caroline Kuntzel and NY Wild Card, Kim Barnes to name a few. It was an impressive field of talent.

The opening heat times of Round 1 were dominated by the return of Shae Foudy who charged off the start with her usual ferocity to set an astounding time of 3:11:40 with April Zilg in close second. Fiona Wylde’s first heat with Annie Reickert gave Fiona the win, but with a heat time of 4:57:73, over a full minute behind ‘Flash Foudy’. It looked like Shae was the woman to beat. But in Round 2, we saw April Zilg dominate over Yuka Sato, Caroline Kuntzel and Giannisa Vecco by charging through the surf and riding back through the finish at 4:43:33. Seychelle Webster also began her bid for the win by beating Annie Reickert, Stephanie Shideler and Kim Barnes at 4:53:86.

In the Semi Finals, April Zilg was clean and fast in her sprint to the first buoy and rounded through the APP arch a board length in front of Annie Reickert. Holding off Annie, April made the final turn and steamrolled toward the beach. Fiona Wylde, also in that heat, struggled at the last turn and just could not make up lost ground. Through the finish came April at 4:38:89, picking up steam and heading for the Final Rounds with victory in her sights. Seychelle kept on the pressure in her 2nd Semi Final heat by burning through the course and showcasing her developing surf skills by catching a bump through to the finish. Shae Foudy’s usual ferocity seemed tempered as her injury had only been cleared the week before. Still, she held on and cleanly followed Seychelle, placing them both in the Final Round of Sprints. 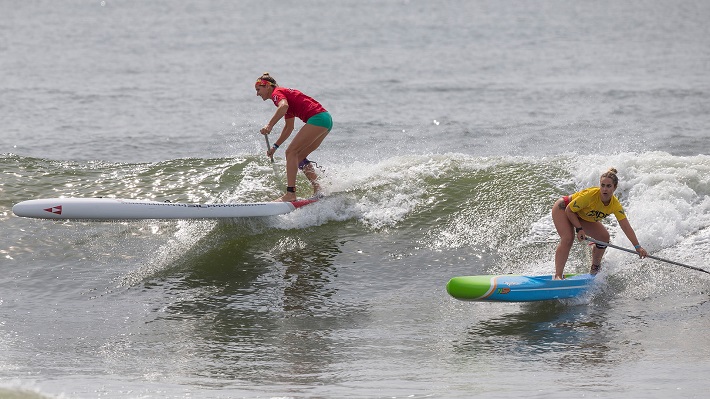 In a stacked heat, the Women’s Sprint Final of the day included Seychelle, Annie Reickert, April Zilg and Shae Foudy. This was a fierce group of women each of whom has worked hard to become the celebrated racer they are. Seychelle brooked no room for error, as Anthony Vela sounded the horn, as her fast and dangerously consistent stroke put her round the first buoy out in front of the pack. April hot on her heels, gave chase with Annie and Shae dropping in to draft behind. 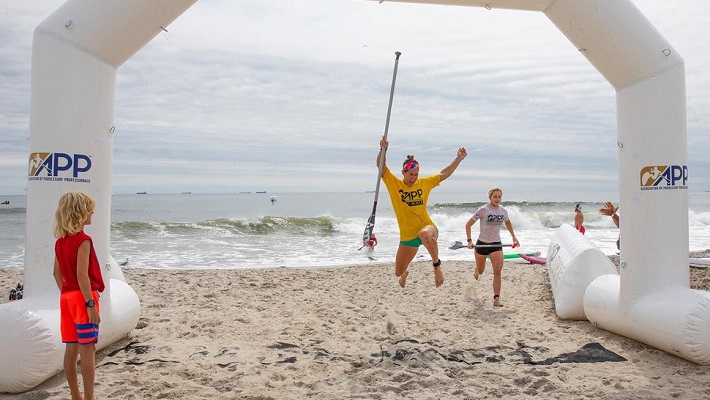 Seychelle’s power is unmistakable as she pulled away from Annie and rounded the final buoy with room to spare. Looking over her shoulder, a bump formed and Seychelle’s long reach put her on a roller that rode her all the way to the beach. Annie and April got mixed up on the wave behind and April went down to give Annie the advantage and 2nd place win.  Young Shae Foudy, struggled through the Final as she came off in the surf at the start, looking like her abdominal tear was affecting her but she pulled herself around to finish 4th cleanly at this year’s NY SUP Open. A fantastic day of racing for all the women. 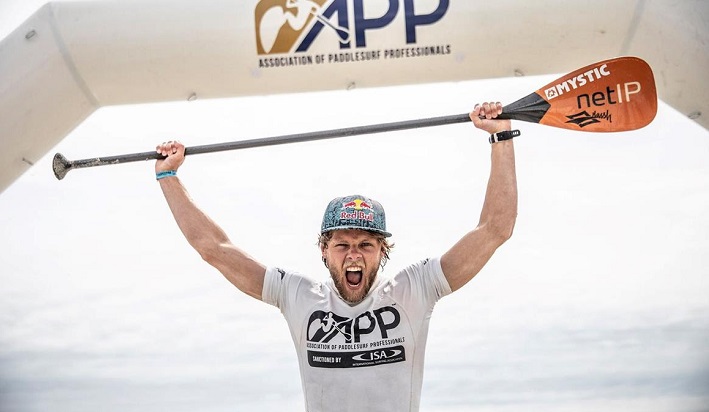 The NY SUP Open will culminate this Saturday, September 7th with the iconic Pro distance race around the Statue of Liberty and Ellis Island