This past sunday was marked by the annual Molokai 2 Oahu. It was an amazing day, from sunshine to rain, flat to chaotic water, and many battles in between. 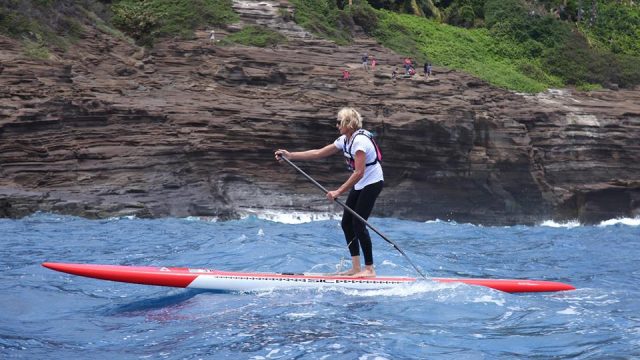 In the SUP solo women category, Sonni Honscheid, set a personal best record in her third consecutive win at M2O (5:01:40). She was just minutes off the unlimited SUP course record of 4:55:02 set by Talia Gangini in 2012.

A close battle took place between Sonni and Annabel Anderson (2nd / 5:17:26). Annabel was originally set to race on her 14 footer but made a late decision during the week to go unlimited.
Terrene Black, the 2013 champion, finished 3rd, while Brazil’s Lena Ribeiro was impressive in 4th. 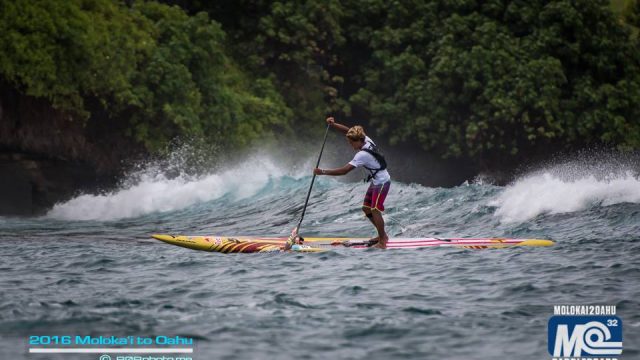 For the men category, Kai Lenny, put his record-setting stamp on M2O by winning the men’s unlimited stand up paddleboard (SUP) race in 4:07:41. Lenny’s win bests that of rival and fellow Maui paddler Connor Baxter’s record of 4:08:08 set in 2014.

Travis Grant, was once again phenomenal, steering his NSP production unlimited board perfectly and pushing Kai Lenny all the way to the line. He finished second (4:10:14) and Connor Baxter (4:16:19) took the place.

In the stock class race, also called “battle of the 14 footers” the Tahitian Niuhiti Buillard finished first just ahead of Travis Baptiste.

in the two-man SUP relay, the famous paddling families in the Hawaiian islands, the Napoleons (Aaron & Riggs / father & son team) could celebrate a victory. Bullet Obra and Alex finished second and the young team of Noa Hopper & Ryland Hart claimed the third.