The Lost Mills Race (the biggest SUP Race event in Europe every year) happened last week-end and for its 4th edition, it has been once again a big fight between a large part of the world’s best paddlers that saw the victories of German native Sonni Honscheid and the Australian Michael Booth.

The major race featured a total of 33 women’s and 124 men’s, to claim the most stacked field this event has ever known. With 3 laps for a total distance of 19km, it has been a very tough race in both divisions considering the hot and dry weather conditions. 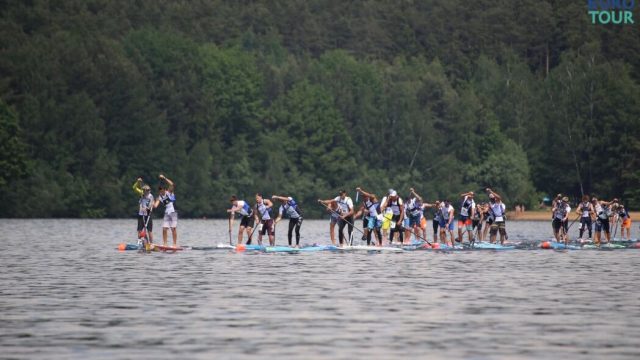 The start of the men’s race was very challenging because everyone wanted to secure a spot in the frontpack. As we saw on the Time Trials on friday, a lot of paddlers are able to hold a fast sprint for a few hundred meters, so you must stay with the ones that can hold a high pace for the whole race and you must not be stuck behind those who will fade away after the first buoy. The draft train stayed quite big during the first two laps with around 20 paddlers in it. Just before the start of the third lap, Michael Booth, Connor Baxter, Jake Jensen and Titouan Puyo put on an impressive attack to break away from the rest of the pack. Then they increased their lead on the running part to make a decent gap between them and us. On the final leg of the third lap, Michael Booth was the strongest and showed us once again after his win in Ste-Maxime that he came here to win the Euro Tour. Connor Baxter sprinted hard to finish runner-up while Titouan Puyo crossed the line in third position, a good performance for him considering that he’s been ill the previous week. Jake Jensen came in fourth place, feeling way better than he was in Sainte-Maxime. After this group arrived the second group in which we were basically 10 competitors sprinting to arrive almost at the same time on the shore. Leo Nika ran the faster to the arch to claim a 5th place in front of George Cronsteadt (6th) and Steeve Teihotaata (7th). After them, Beau O’ Brian, Daniel Hasulyo and Rete Ebb rounded the top10 while Jeremy Teulade (12th) and I (11th) were the unlucky ones to miss the top10 by less than 0.3 second. Also in the group but just a few seconds behind were Trevor Tunninton (13th), Bruno Hasulyo (14th), Martino Rogai (15th), Davide Ionico (16th), Vinnicius Martins (17th) and Kenny Kaneko (18th). Good performance also from Ollie Shilston (19th) and Joseph Geguen (20th) who arrived just behind the group to round the top20. 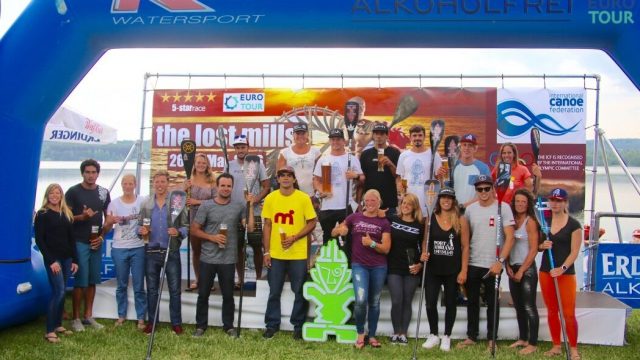 On the women’s side, Sonni Honscheid looked unstoppable and hold the lead from the beginning to the end. With already a victory the previous week-end in Ste-Maxime, Sonni in sitting in a very good position to become for the second time the Euro Tour Champion this year. Just behind her, Fiona Wylde and Seychelle Hattingh battled all the way to the end for the second spot but Seychelle, probably inspired following her performance on friday’s time trials, was the strongest on the final leg and finished in second position ahead of Fiona Wylde in third. Working hard in front of the third pack and almost getting back on Fiona and Seychelle was the surprising April Zilg on her Hobie board, who finished in fourth while the Spanish paddler Laura Quetglas rounded the top5. Arriving from the same group were Susak Molinero (6th) and Petrunella Van Malsen (7th). Just behind in 8th position was the french paddler Amandine Chazot in front of Jannek Smits (9th). Special mention to Kimberly Barnes, who worked really hard to finish top10 despite a terrible start. 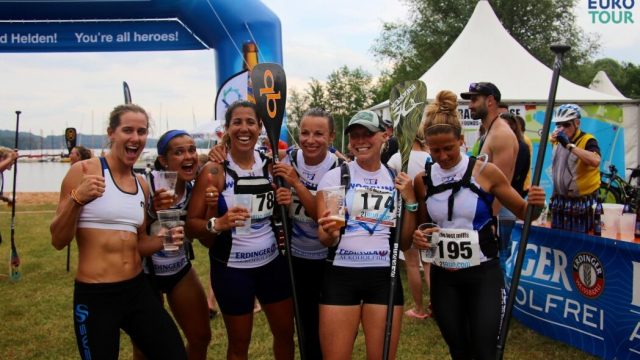 Once again this year, the Lost Mills race has been an unreal event and held strongly its title of the biggest European race. But some points make me think that this event may not be as big as it used to be in the next few years. Indeed, I participated at the first Lost Mills edition in 2013, and it was a revolutionary event in Europe, putting for the first time here a big amount of prize money and hosting some new format of racing (sprints, survivor race..) while being hosted at the same time than a beer festival on Brombachsee Lake. But it looks like every year the prize money is getting smaller while the field is getting bigger (not to mention the German taxes that put away 40% of your Prize Money). Moreover, the organizers don’t seem to be really willing to listen to the EURO TOUR’s and the racer’s requests according to the race formats, invitations and the Prize Money’ split. And finally, the hotel in front of the event site, which is pretty much the only hotel around there, is way too expensive, and nothing is done after 4 editions to find a solution for the riders to sleep somewhere at an affordable price. So I’m just wondering if this event can possibly continue to grow for the years to come or if it is going to fade apart if they don’t change a few things.

But to conclude, I would day from my own point of view that this has been once again an amazing performance, not really because of the organization, but more thanks to the amazing job done by the EURO TOUR crew and to the presence of such an awesome field of racers that make our sport as nice as it can be, with both big confrontations and a very friendly atmosphere.