With two finals at the ISA World Championship and a technical race final at the PPG, Canadian SUP racer Genna Flinkman is proving that she is a fast learner. Hardly two years into Elite Women SUP racing and Genna Flinkman has already impressed her peers with one the quickest starts on the planet. This year, the Infinity SUP rider from Canada took things to the next level competing like the pro she is rapidly turning into. 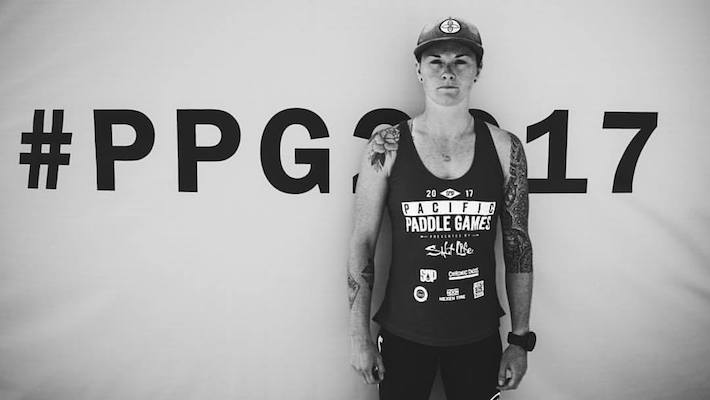 Hi Genna, can you introduce yourself to our reader?

Hi, I am Genna Flinkman and I am a Stand Up Paddleboard racer/ SUP Surfer from Alberta, Canada.

When and how did the whole SUP story start for you?

I started paddling in August of 2014. A friend of mine and fellow speed freak, Ryan Knysh, convinced me to try it out. I was looking for something to do in the summer as I can’t really run anymore. I suffered from an injury that tore a ligament in my hip in 2013 while training on the development team for Skeleton (like Luge/Bobsled but head first). The injury left me unable to participate in a lot of the sports I played at the time, so I finally gave in and tried SUP. I tried it once, love it, bought a board the next day, and raced. I didn’t do that great in the race but I loved it. Unfortunately, it was almost the end summer for us so my husband and I drove down to California to learn from Anthony Vela. Once I saw how good everyone was in California, I new I wanted to get better and be competitive with them, so I started training from that moment. 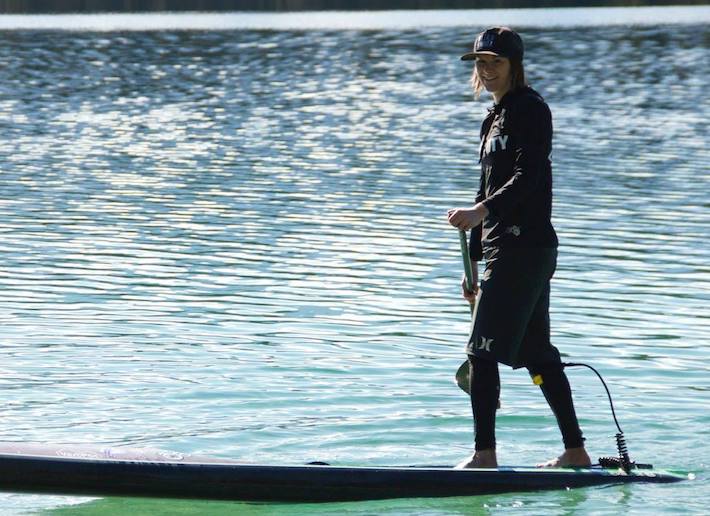 You are both a SUP surfer and racer. Which do you like most and why?

I really love racing and to be honest I am a better racer than surfer. That being said my heart lies with surfing. I have been a snowboarder since I was 12 years old. I would spend entire days in the snowboard park hitting jumps and rails. I think thats why I love the surfing and surf racing so much. Surfing is a lot more like snowboarding than racing. I love that feeling of just you and the wave and the inconsistency of it. Learning to read the waves and then how to improve on them. When you finally get that one skill you have been working on, it’s the best feeling in the world. Plus, once you add in the element of surf in a race, anything can happen and I love it.

Can you tell us about your SUP activities in Edmonton as well as your home spots?

When I am in Edmonton I have a few different places I train. Some days I do what I call “resistance training” and I paddle against the river that flows through the city. It’s not a terribly fast moving river but it does move fast enough that you have to work to paddle up it. I also train and teach out of Allen Beach with Northshore. It’s a nice little spring-fed lake that no boats are on. The water is clean, which is a bonus as we have a lot of leeches in Alberta, but it’s pretty cold water so it’s motivation to not fall in. The only place I surf is in Tofino which is about a 15 hour drive and a 2 hour ferry ride. I live 12 hours away from the ocean so I can make it to Tofino in just over a day. Then I usually stay for a few weeks to make the most out of the trip and get in as much surfing I can. I try to make this trip 2 or 3 times a year.

You toured Europe back in Spring with the Infinity SUP gang and you seem to totally belong to that team. How did you get into the Infinity squad? What values and defining features set apart Infinity as a brand?

Travelling with Infinity for the Eurotour was awesome! They are such an amazing group of people. I got introduced to the Infinity squad thanks to the Ryan Knysh. He was already a member of the team and I had told him that my goal was to one day paddle for them. I was lucky, Ryan vouched for me and I started out on a Canadian ambassador of the team. Really, I just did my best to get better and be as much a part of the team as I could. As I spent more time with the team and improved, my involvement increased and I was lucky enough to join in with them in Europe.

With Dave Boehne and Infinity I don’t really feel like their is a “Pro” team and an “Ambassador” team. Obviously some of the team members are Pro’s but I feel like everyone at Infinity just treats us all like we are family. That’s what I love about them. At the end of the day, they want rad people representing them, that fit in with the crew. Infinity isn’t afraid to be different and try new things, in fact I think Dave thrives on it. I think this is why they make such great boards. 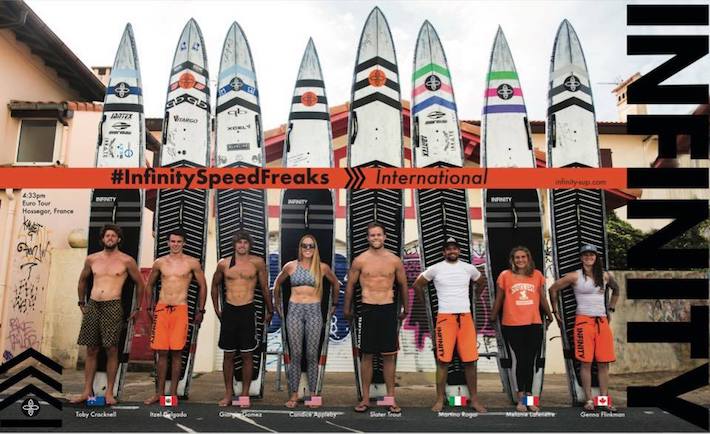 Ultimately, as an athlete I have always felt like they were going to do the best they could to help me out, make me better but not put a ton of pressure on me. From the moment I walked through the doors of Infinity I felt like I was part of something special. You could walk in and get Steve or Dave and they would have an honest conversation with you about gear and help get you the perfect board. I have seen customers come in and have questions and even though they have been swamped with work Steve, Dave, or even Slater Trout or Giorgio Gomez (if they happen to be in) take time to answer that customers questions. I think that is what makes them different, they are down to earth, honest people who like to have fun but also make great boards. They really are the raddest group to be around and I am proud to be a part of what they are doing.

Can you take us through your Infinity quiver?

Right now I am adjusting my quiver for next year. However, a Blackfish 12’6×23 and BLine are a must! In Canada our races are often choppy water or river races so the Blackfish is perfect for them. It really is the fastest board I have ever paddled. It jumps off the start line, my favourite part of the race, and catches the smallest bumps. Because my favourite races are surf races, I prefer a Blackfish. As for surf, I have had a 7’4×23 BLine that I have been surfing for a year that I am in love with! From the moment I stepped on that board I knew it was a keeper. I am also adding a 7’0x24 BLine with a bit less volume just to add a different option for the waves in Canada.

What have been the highlights of your season so far and what’s next?

This year has been a whirlwind. It was my third year racing and my second year racing Elite, so I really didn’t expect it to play out the way it did. There were so many epic moments its hard to pick out a few. However, getting to go to California for two months to train with Performance Paddling/ Infinity SUP and to paddle in the winter was pretty amazing. I got to train 4 days a week with amazingly talented racers and race when I am normally sitting at home in -30 Celsius weather. I was pretty stoked. Hossegor was also a highlight. Getting third in the sprints and then getting to race against a very talented field of women was pretty amazing. It gave me even more motivation to go home and train harder so that I could be more competitive for ISA’s the rest of 2017.

Finally, the ISA SUP Race World Championship and the PPG were huge highlights for me. At ISA’s I made it to the finals in both sprints and technical which was my goal. Unfortunately, a little over halfway through the 200m sprints, I caught a funny bump and when I went to commit to my paddle stroke the water disappeared from under me. I went straight into the water moving from 2nd or 3rd to 8th in a split second. It was pretty disheartening and I would be lying if I said I wasn’t still choked about it but that’s the beauty of the sport and that is why I love it, anything can happen. Even though it didn’t work out the way I had hoped it was still a highlight to have been in that situation and next time I won’t fall. 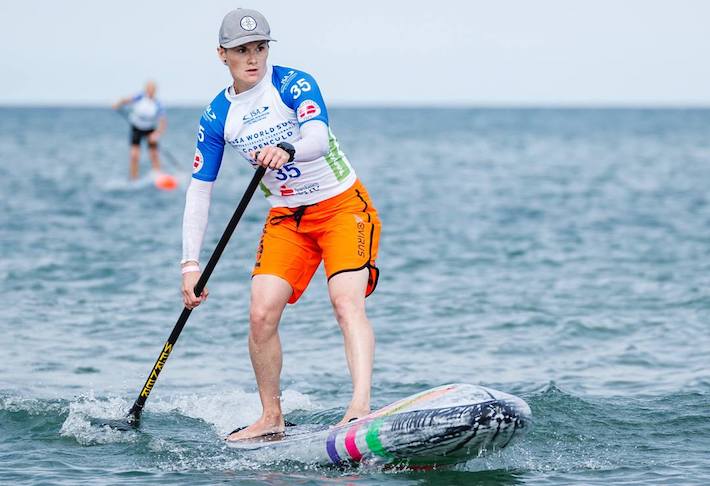 PPG is always a highlight for me because it’s such a huge event. I love surf races so I always look forward to it. My biggest goal of this year was to make the finals. It wasn’t easy as the talent for PPG is always top notch but I scratched my way in to the finals thanks to a good start. That was a pretty huge moment for me as I wasn’t sure if I was going to make it on. Either way the atmosphere and the people always make the events awesome. I have met and made so many friends this year so any event that brings us all together is memorable.

As for what is next. Right now I am back home in Canada recuperating from a long season. In the winter when I can’t paddle, November – March/April, I play in a competitive women’s hockey league and I train at a competitive boxing gym. My goal is to travel to California again, around February, and stay for a few month in preparation for the Euro Tour and the season. Hopefully, I will get to represent Canada again and improve upon my results from last year. Ultimately, I see myself continuing to be as much a part of this sport as I can. To be part of a sport that feels like family everywhere I go and to have sponsors like Infinity, Werner, and Virus that treat me like family is what keeps me coming back. This year I was only home for 18 weeks, I spent the rest of the time away to either train or compete, and I wouldn’t do it if I didn’t love the sport and the paddle community so much!