September 5th will mark the 11th edition of Dordogne Intégrale, one of the most extreme open SUP races in the world. Ahead of this iconic event, TotalSUP caught up with three extremely experienced endurance paddlers competing worldwide in ultra-distance paddle competitions,  Shara Dubeau, Christian Moutsakos and Miguel Martorell, as they embark on the 130 km challenge through the Dordogne Valley in Southern France.

Why endurance paddling? What’s the pull of this most challenging type of SUP racing?

Christian Moutsakos: It’s the mix between mental and physical challenge and of course not to forget the elements of nature you have to overcome but the joy and achievement is just a great feeling and experience.

Shara Dubeau: A big part of the pull is that it becomes much more of a challenge against yourself instead of against the other competitors. We all have our preconceptions or doubts about our capacities, and endurance is a way of moving forward and going past those. As each race I did became longer, at some point I would realize that I just passed my longest distance EVER and yet I still have 40, 60, 100 km to go. You know you’ve already achieved a huge accomplishment and that helps to keep going.

Don’t get me wrong – the competitive spirit is still there! But even among the competitors there is much more “entre-aide” as we say in French – everyone is willing to give you tips and you’ll even ask each other how things are going if you see them during the race. I’ve actually “met” a lot of people only on the water in the various endurance races I’ve done. It’s a great community.

Dordogne Intégrale is one of the most extreme SUP events in the world. Why this particular event and how do you prepare for it?

Christian: 2017 was my first try and I had lots to learn but the stoke was unbeatable after the race. This is a big motivation, compared to the first attempt, I got more experienced and managed to do it faster and with just one break in 2018 . To get my body in shape with fitness and biking and a few strokes before this wonderful race so I’ll see how this year it pays off.

Miguel Martorell: Dordogne is a very special race for me and one of the most recommended races in Europe, both for its length (130km) and for the wonderful landscapes you can enjoy will rowing along the river. The race start in Argentat at 6:30 in the morning and it’s amazing. The light of the sun rising and the presence of more than 200 SUPpers at the start line are an unforgettable memory. People taking part in the race for the first time do not have to be afraid of the race length, because the river itself flows at a big pace, and watching your GPS the speed is over 16km per hour which makes the tour less tough.

The first 40km are some of the most difficult, including whitewater stretches and portages but are also the funniest ones. For the rest of the race it is very important to be aware of the river flow and to keep the highest average speed possible. After paddling a minimum of 10 hours and a half, the arrival to Castellnaud is a great reward. This year I have not prepared the race training long distances, but with a pre-season which included gym and water sessions.

Shara: It’s in a region that I already know and love, so of course I wanted to paddle through it! I’d actually been following the race since the first year they allowed SUPs but I didn’t feel that I was ready at the time – I regret that a little now. And for the Dordogne Intégrale 350km last year, the instant they announced it I was 100% decided. I just HAD to do this race. I was so keen that I was the 2nd person to register!

A post shared by Franck Cordier Photographies (@fcphotographies) on Jan 20, 2020 at 4:23am PST

Preparing for a long distance I personally find it useful to do a few longer SUP sessions in a row. Before my first Dordogne Intégrale, I took a weekend and did 20km on Friday, 35km on Saturday and 20km on Sunday. This allows you to check your food and hydration to make sure that you have enough and the right kind. It also helps you to see physically where things work and where you may have problems: blisters, any muscles that hurt more than they “should” (because you will always have some muscle fatigue, but it’s important to listen to your body and try to understand what is just the muscles working as they should be and where you may be hurting yourself by working them too hard – like putting too much strain on a small muscle group).

For the Dordogne Intégrale 350 in 2019 I did get a personal trainer (Vincent Guillaume at Training Week) specifically to help me with my technique. I was certain that I was spending much more energy without advancing as well as others, which meant more muscle fatigue and a higher risk of injury. This definitely helped for the Dordogne Intégrale 350, but even now it’s a work-in-progress.

What are your expectations for this year’s edition?

Christian: I hope to stay healthy and fit and not missing out as last year 350km edition, also it depends on the weather and daily condition but I aim for a top 20 spot.

Miguel: My expectations for this year, as always, is finishing the race and have fun. And I would be very happy if additionally I can get a better position than in the past editions.

Shara: I’d love to do the full race without stopping! That’s a new personal challenge. I think the race is going to feel very different since the Dordogne Intégrale 350. Last year, the Dordogne Intégrale 130 finish line was just a quick 10 minute stop before continuing to paddle 180km by midnight. That doesn’t mean that it’s going to be easy – we can never know what’s waiting for us: headwinds and rain like 2018 or just a bad day physically. But I think there will be less mental barriers at the start.

What’s the toughest part of competing in an endurance event?

Christian: The moment when you start to feel some irregularities about how body and mind are working and to get over it.

Miguel: It could seem that the hardest part is to be fit enough, thing that is obviously really important to be able to keep paddling so many hours. But the ability to control your mind in difficult moments is really they key to be able to finish an endurance event.

Shara: You would think this would be easy to answer – but for me it’s not. Maybe I’ve blocked the tough moments out in order to continue with another endurance race. For some people I think it may be boredom or that they don’t like paddling alone – but that doesn’t bother me much.

I’d have to say the hardest moments I’ve experienced were physical during and after the Dordogne Intégrale 350. The last 40 km on the first day were practically flat and the effort drained all the energy I had. When I finally reached the dock I could hardly stand up, let alone walk! And yet somehow at 7am the next day, I was back on the board and paddling.

What are your tips for paddlers entering the endurance SUP scene?

Christian: A good thing to do is not to underestimate distance and weather conditions and likely not to do an endurance race without talking to some experienced paddlers before about training, nutrition, mental and physical preparation and of course the equipment.

Miguel: As I said before, a physical training good enough for this kind of events and also being able to control your mind when in hard moments it tells you to stop.

Shara: Don’t be frightened off by thinking that you have to prepare by doing super long SUP sessions. Before my first Dordogne Intégrale the most I had ever paddled in one day was 40km. Mostly I train 4-5 times a week with 1h long sessions (SUP, running, swimming), and a few long distance SUP sessions within the months leading up to the event.

Use your training to test all your equipment: SUP, paddle, clothes, food and hydration. That equipment is going to serve you for many hours, the more comfortable you are, the more you can just focus on the race. Have a light paddle – your shoulders will thank you! Mine is a Fenix which is more for white water but it’s light and I’m used to it, so often I don’t even get blisters. Wear clothes in layers because the race starts in the early hours so you may be cold but depending on the weather you could be finishing in boardshorts.

I usually have two water bags with me: one with liquid food and the other with water. In this way you get a regular intake of calories and it’s a welcome change from the bars or electrolyte drinks. Everybody is different with food. Personally, I have to remember to eat regularly – like half a bar per hour – from the beginning of the race. Whenever I forget and I start later I hit a wall around the 4hour mark.

Mentally, one thing that helps is that the river current will keep you moving even if you take a break. Another is to cut the race up into sections, so think about it in blocks of 10 km or 20 km and each time you reach a goal instead of just thinking of the daunting finish line. The first year I set my watch to 10km auto laps. And before you know it, you’ll be like any Dordogne Intégrale’er – once you pass the 80 km you’ll think “I’m almost there”! Oh – and don’t forget to enjoy the scenery! Last – but definitely not least – make sure you’re well rested for at least the week leading up to the event.

Christian: Well, I would love to do the Lignano SUP race 23km, then of course Dordogne Intégrale, the Tawara Tarn Water Race, in July a nice warm up paddle for 10 hours in Vassiviere and after the 3 Bay weekend in Morbihan cracking on for the 24 hours in Cantabria, La poblacion and of course the SUP11 City Tour, the non-stop and grandmaster category (5 days).

Shara: There was a dream event that is now in my calendar for 2020: the Yukon River Quest! I’d already read about the race for a few years, and almost immediately after the Dordogne Intégrale 350 I started thinking about it seriously. And now I’m embarking on this adventure with a friend who’s also hooked on SUP endurance races, Morgan Caira. Part of the prep for this event is grizzly training!

To find out more about the Dordogne Intégrale, visit www.vallee-dordogne.com or check out the event page www.facebook.com/dordogneintegrale 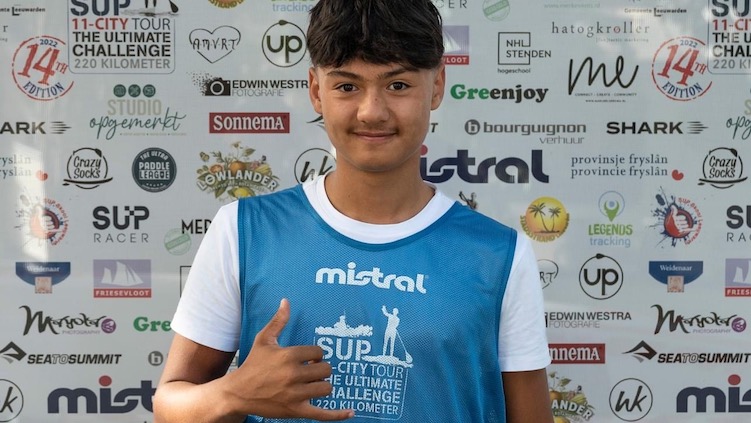 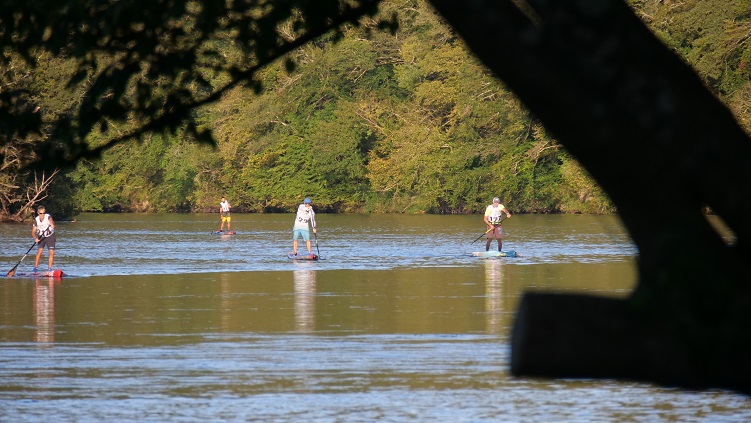 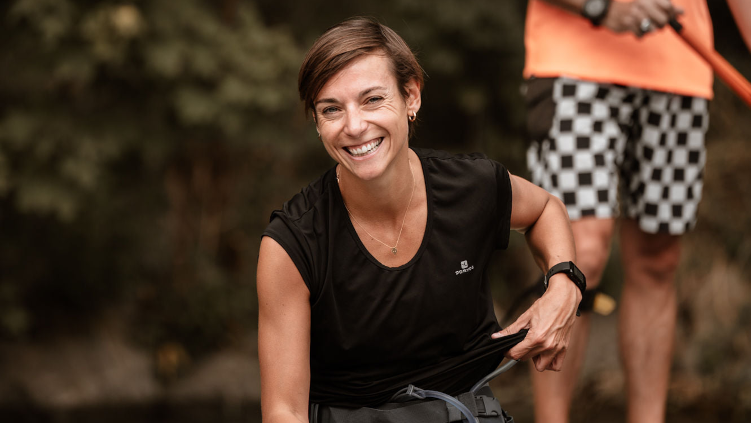 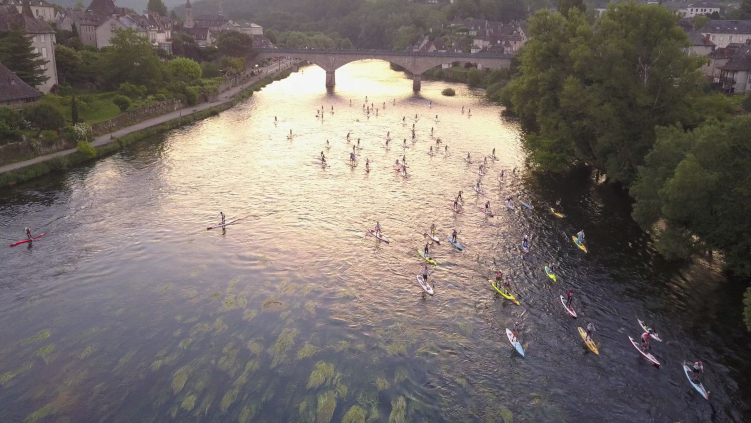 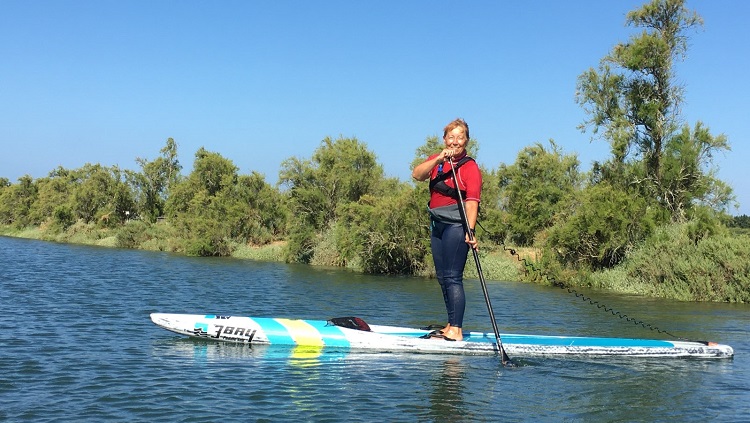