Live Updates, videos and photos all week-end on www.facebook.com/totalsupofficial
Click here for Photos of Day 2 – Sprints – Pros
Click here for : Day 1 Results of the Iberdrola Barcelona Stand Up World Series

Connor Baxter (Starboard) puts on an awesome display of sprint paddling to take his second win here in Barcelona and take the Overall Win at the Iberdrola Barcelona Sup World Series.
Dominant all through the Sprints – Connor went through the motions in the early rounds leading up to the Semi’s where he really turn on the power and stormed over the line. It was a similar story in the Final, getting a great start he was battling with Kai Lenny (Naish) straight out to the first buoy. Finding fifth gear he was able to round the top buoy first and Kai Lenny pushed him all the way but was not able to catch the electric Hawaiian who crossed the line in first. Connor, who makes it two bullet wins goes top of the 2015 SUWS Leaderboard after Stop 1 and shows the rest of the athletes his intent for the rest of the World Series.
Candice Appleby wins the Womens Finals and takes out the overall win here on the first stop of the 2015 Women’s #SUWS in Barcelona. Showing her athleticism and she was able to ease through Round 1 straight into the Final. Choosing an inside line straight out to the first buoy she was unstoppable. An awesome beach start meant she lead straight from the buzzer. The up and coming youngster Manca Notar (Naish) put on a strong show in second to try and catch the American but round the first buoy Candice just had too much in the tank and was able to storm to victory. Despite having to borrow Quickblade team-mate, Casper Steinfath’s board (as her's had not arrived) she now tops the 2015 Women’s #SUWS Rankings. 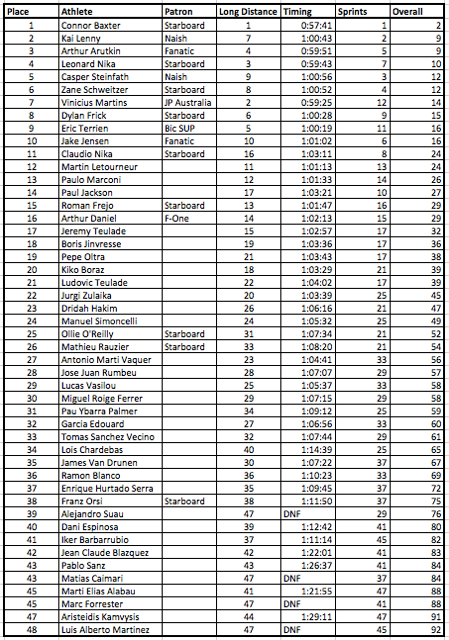