The fin is one of the most important elements of a SUP board, affecting directly its speed and its trajectory. These days we see a lot of different types of fins with different shapes, materials, size and weight… We thought it was high time to address this crucial question we are so frequently asked for : “How to choose your SUP race Fin?”. To help us, we turned to our friend Chris Ting, fin specialist and the founder of the pure-player fin brand VMG Blades!

How to choose your SUP Race Fin?

Hi Chris, can you introduce yourself to the TotalSUP readers?

I grew up and live in Sydney Australia. I’ve been sailing and windsurfing all my life, having competed in Australia and Internationally. I’ve built a racing yacht and also designed and built custom formula and slalom windsurfing fins for many years.

Almost four years ago, Brad Gaul asked me to build custom rudders for his unlimited Molokai 2 Oahu prone board, and not long after, Sam Parker asked me to design and build a better SUP racing fin. I had just gotten into paddling and could already see that many SUP fin designs were based on surf fins. So I accepted the challenge – to create a better performing fin for SUP.

Can you remind us the basic principles behind the use of a fin?

A fin is a small piece of equipment, but does have a large impact on the performance of your board. Just look at the recent downwind hydrofoils to see the power a foil can generate under the water.

A good SUP race fin needs a considered foil design that also has appropriate foil thickness. This stops you from stalling or increasing drag at angles of attack that a SUP encounters. A SUP is rarely travelling in a perfectly straight line, so this angle of travel can create unnecessary drag.

A lot of people underestimate the importance of a good fin, have you ever felt the increase in drag of just one piece of weed on your fin? A poorly designed fin can feel the same. Now imagine the effect on your board for an entire race.

What makes a good SUP race fin and why is it important to have one?

A good SUP race fin will accelerate quicker, and decelerate less which promotes more glide. A good fin will also enhance the qualities for the particular conditions you are paddling in. Track straighter in flatwater, perform tighter buoy turns, or allow you to slide into bumps easily while downwinding. Basically a good fin will enable you to paddle more efficiently for the fins intended conditions, or achieve Velocity Made Good (VMG – the most efficient use of effort towards a goal).

It is important to select a fin which has properties to allow you to concentrate on paddling and/or racing, rather than balance and control.

Why one can find different SUP Race fin shapes and what are they for?

For sprinting you need a fin which will allow to you accelerate quickly and maximise strokes per side
with low drag. The combination of these requirements determined a short fin for low drag with wide chords (fin width) for directional stability. I’ve had feedback from our team riders that they could paddle a 200m sprint just on one side – that tracking ability also means less swapping and a better overall stroke rate. 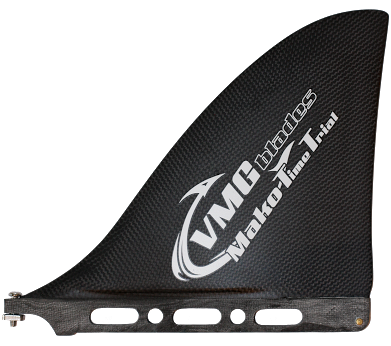 (Pictured above : The “Mako Time Trial” Sup race fin is a special fin for Flatwater sprints. This is the fin Trevor Tunnington used in 2015 to become the “Fastest Paddler on Earth”)

Distance racing requires some stability so a longer fin is preferred, the conditions, your equipment and your ability will determine how long a fin you need. Additionally you may need the ability to draft and catch bumps, so you are looking for reasonable tracking yet not so much that it locks you into one line. You want the fin to effortlessly hunt, catch and help you link bumps. 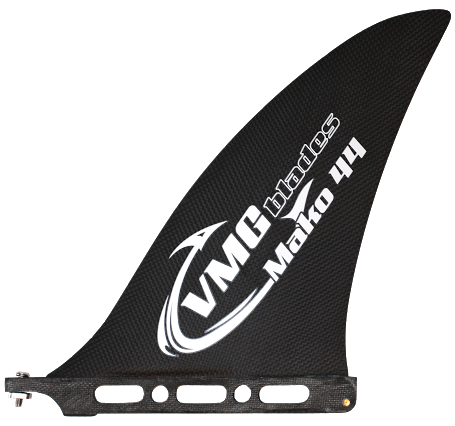 (Pictured above : The “Mako 44” SUP race fin is a little bit longer than the other fins and offers more stability to save energy during the long runs)

Technical racing usually means many buoy turns, quick acceleration, rougher conditions and potentially surfing as well. So you need a fin which has narrower chords to allow tight turns, in addition to having good control in the surf. The fin should allow you to place the board exactly where you want it whether that’s during the buoy turn, on the wave face, or in the draft train.

(Pictured above : The “Mako 35” Sup race fin is a Technical Racing fin, with less volume and narrower chords to turn and accelerate more quickly)

What about the importance of the weight and the construction materials?

My experience in competitive watersports has reinforced that a lighter foil is always beneficial and you also need the highest quality materials to get the best strength to weight ratio. Our fins are so light they actually float.

The simple benefit of light weight fins, is that it is less weight that you are accelerating and decelerating for every stroke. In a race you will paddle thousands of strokes, and with every gram of weight, it soon adds up to a lot of extra weight you have carried.

Heavy fins will un-balance your board causing excessive swing weight. This makes you adjust your positon on the board for correct trim, and also has an adverse effect on board pitching through waves. 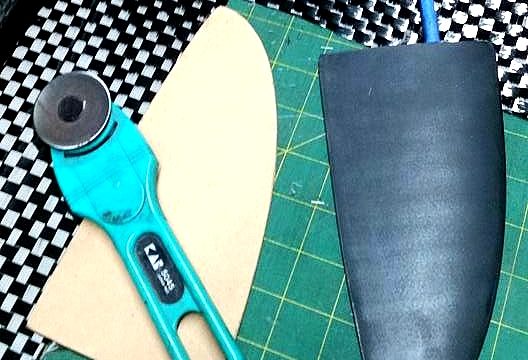 Can you tell us more about your company VMG Blades, your production choices and your involvement in the sport as a racer and a sponsor of some of the world’s best paddlers?

VMG Blades began as a custom windsurfing fin company. Windsurfing fins, especially Formula Windsurfing, push the edge of materials and design development. We have brought all of our knowledge across to the design of our SUP racing fins.

We have detailed knowledge of how shape, bend and twist all have a major influence on how a fin feels and performs. Every aspect of a fin’s design and build is interrelated. Most people realise the shape and thickness of a fin influences how it bends and twists. What we have done is take it to the next level by using our laminate expertise. In combination with the fin shape we can control how a fin bends and twists by modifying the materials and fibre orientation thus getting the fin to perform optimally.

Initially we manufactured locally in Australia, but the ability to scale the volume of production was not practical. Full time production was eventually outsourced after numerous scouting trips and finding a suitable factory. Over various trips and many skype calls we worked closely with the factory to get the desired product.

I started paddling seriously in 2013, as I felt it was important to get on the water itself so I could actually feel what each of my designs were doing, and also interpret the feedback given from the team riders. I’m fortunate that in Sydney we have a very high calibre of paddlers, and most training sessions will be run or at least attended by world class paddlers, such as James Casey, Brad Gaul, Dave Kissane, Sam Parker and Andy Davies.

We’ve sponsored some local races and now our first internationally. With the races we support, we feel that it is important to recognise and encourage new and upcoming talents.

As far as our international team goes, we first started with Beau O’Brian, quickly followed by Terrene Black. Trevor Tunnington was next, and the team has been growing steadily ever since, as these Elite racers see the benefits of racing with our fins. 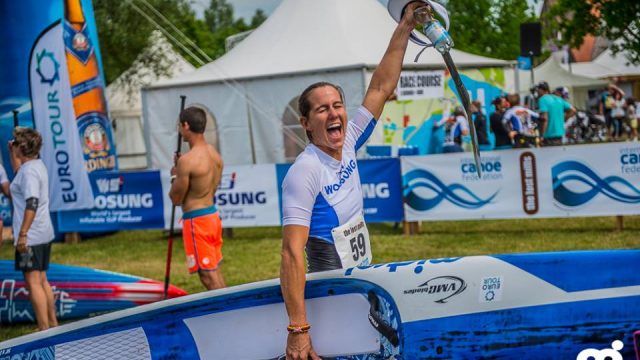 We’ve come a long way creating a better performing fin for SUP with many race wins and international podiums. These are some of our recent results we’re proud of: