Russian SUP racer Andrey Kraytor is throwing down the gauntlet with a bold statement!  The Sprint Canoe Olympian who finished 4th on the last ICF Worlds 200m Sprint in China – after only 2 years of SUP racing – is confident that he will beat the Hawaian champ – and technically American – Connor Baxter’s world record of 46’32 seconds set precisely in the sprint finals of the Qingdao competition last October. Watch out the Russians and the whole Eastern block are coming in search of Aloha … and some medals! For our pleasure and excitement, we are sensing some fierce fights ahead! 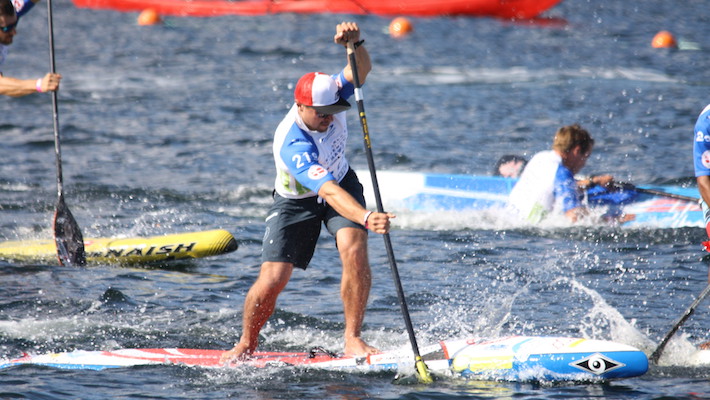 Hello Andrey! Thanks to you we’re finally going to talk about SUP in Russia. Let’s start with your athlete CV!

Hi Mathieu, first of all it’s a pleasure to be interviewed by you! I respect and appreciate your work! Big thanks for promoting and developing SUP on behalf of the whole Russian community!

I am Andrey Kraytor, 27-year-old, born in the center of Ukraine in a small town called Olshanka located on the river! Far from the sea or the ocean!
My father is a canoe sprint coach, and that explains how I naturally started this sport which has defined my path and has made me who I am right now!

My canoe background is the biggest part of my life. After I finished middle school, I moved to Azerbaijan and represented their flag, then I moved to Russia and became an Olympian with the Russian Olympic team in Rio.

I am 2 x World and European champion. I can’t really list here all my medals so in a nutshell let’s say I was good at Canoe Sprint and lost medals only two times in my career: at the Olympic and European games, which are the most important races! Bad luck. But I won in the World University Games, several World Cups, u23 and junior competitions and I have been on the podium all my life, mostly on top! 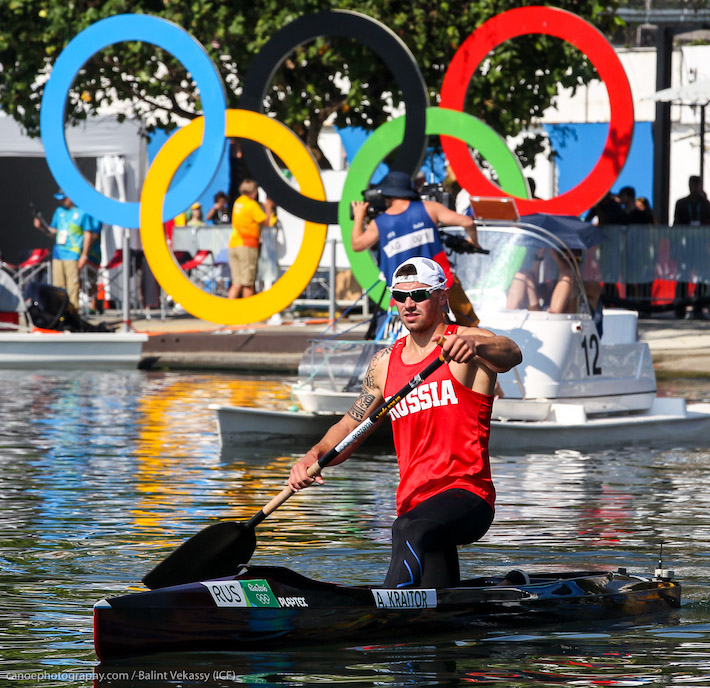 How did you start stand-up paddle?

My SUP life started not too long ago. I am only in my 3rd season now. Two years ago I found out that the ISA Worlds were going to take place in Denmark and that the Russian Surfing Federation was putting a team together for the first time ever! I am a sprinter and when I saw that there would be 200-meter race I decided to try!

I had never paddled a SUP board before. I have been surfing in Portugal on vacation every year for a few years but never tried Stand Up Paddling. I thought if I have a paddle 10 months per year, I don’t want to have a paddle in my hands while on vacation!

So I made around 10 paddleboard sessions, won the Russian Championship and got selected for the ISA worlds!

I made 9th in Denmark, it was an amazing experience and I fell in love with SUP

After that I competed in an ocean race in Portugal, the Eurotour race in Finland and the 2018 ISA World in Hainan. The 2019 ICF Worlds In Qingdao was first race for which I had tried to prepare for a top result.

I made 4th and it was an amazing race with the best time ever from Connor, and actually, I want to say I am happy that I finished 4th. I didn’t put myself into the preparation fully and if I had won a medal, it would have been too easy! 4th place is the best place ever for motivation !!!!!

I see your name is associated with #SUPKULTURA, what is it exactly?

SUPKULTURA is four things in one: a brand, a festival, a race and SUP-related activities!
We want to make it international and big name in future! Under the #SUPKULTURA flag, we have just launched the Rublevo Race and despite the crazy times we are going through, we have managed to gather 150 racers and a lot of partners! For the upcoming season we are planning to cross the Baykal Lake as well as another surprise for the entire SUP community that we want to keep a secret for now!

Can you detail the existing Russian SUP racing scene f0r us?

SUP is growing so fast here, especially as a recreational and touristic activity. I would like to insist on one thing that I’ve realized about Russians. When people like something here, for instance like triathlon a decade ago, they get completed crazy for it, totally addicted! The same thing is happening now with SUP.

– Vladivostok set the Guinness World record of number of stand-up paddlers on the water in 2017 with 844 paddlers.
– We have an amazing festival in Saint Petersburg called FONTANKASUP in the heart of the city with more than 3000 boards.
– We have a great race called the ZAVIDOVO SUP RACE, it’s a 46 km this year with 400 attending competitors.
– The commercial part is great too and we are starting to have our own shapers and manufactures, which is amazing.
– This season every shop and brand I have met was sold out in Russia.
– I’ve heard of just one industry player who sold 5,000 boards so can you imagine in total?
– In Moscow, we have a great spot GoSupMoscow and it’s really showing me how people love SUP. Every morning at 5 in the morning 20 – 25 people come out for a SUP SUNRISE before going to work. GoSUP Moscow have also created a daily Run and SUP (5km+5km) and people come at 5 in the morning, run, paddle, drink coffee and go to work!
– And to finish off, a friend of mine made a marriage proposal with a great show on the water..

What I am trying to say is that when the Russians start to be addicted, you can expect something really nice and huge! 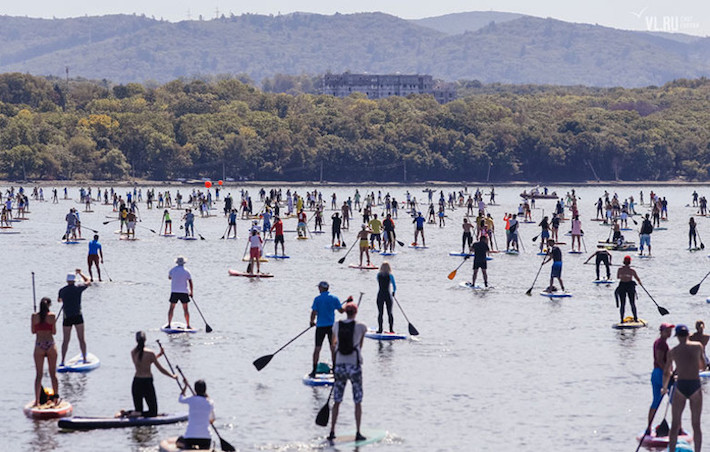 How is the sport structured in Russia?

We have the Russian Surfing federation which is officially recognized by the Russian Olympic Committee and a team for the ISA Worlds with support and help from private sponsors.

We also have the Russian Canoe Federation which has organized for the second year in a row the President Cup and is on its way to develop new events and formats.

In the Far East region, which is 8000 km from Moscow, there is an amazing community, with an ocean-side lifestyle and some great events. I have been lucky to go there a few times and compete with them.

In my opinion, SUP as a sport in Russia is just in a development process and the shaping of its structure really depends on whether or not it goes Olympic.
I am certain we don’t have right now the support and resources that France, Spain, Italy, etc., receives but we have a big country and a lot of people.

We have a lot of commercial events and races where we can race and represent our sponsors, and that is good for the growth of our community. 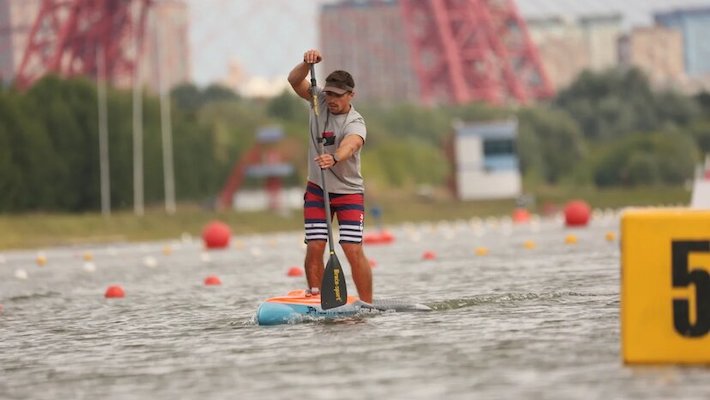 Who are the main SUP race athletes to look out for right now in Russia?

At the moment, the Russian athletes who took part in the SUP world championships all have a canoe/kayak background. 2 of us made the finals at Qingdao in the sprints, I was 4th and Kotsur Eugene was 6th. Lena Prokhorova took bronze at Euro Tour Prague 2019, another girl Natalia Frentiy took bronze at Scharrbeutz in the ICF World Cup 2019. Also Nastya Pavlova took 3rd at the inflatable race at the ICF World Championship in China.

We have junior from Far East Veronica Savonova who competed in ISA 2018 Worlds.

We are getting better in flat water races and from race after race inside Russia, there are more and more guys closer. I believe in the next season we are going to hear more about Russian athletes but also the whole eastern block with athlete like my fellow Ukraine athlete Alex Sidenko and see this part of Europe in the top 5 at international levels. 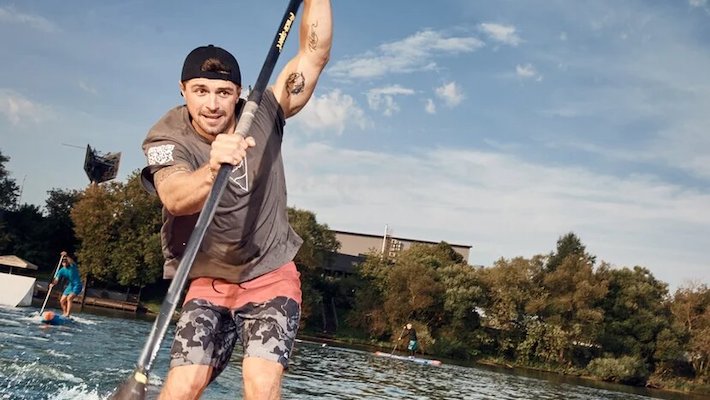 How do you feel about the possibility of seeing SUP Racing become an olympic sport?

I feel so excited about this. First, because I am a racer and I want to compete, I want to fight for gold. That’s part of me and it’s always been my dream and goal to get on the podium. That’s basically what gives me power and energy! Without this, SUP racing would lose a bit of sense for me! I am not sightseeing and looking around when I am on the board, I am an athlete!

Having said that, I am not 100 percent sure if this would be good for the entire community. I think it is a personal question, when a sport is Olympic, I think the vibe is different.

But this is a romantic tale…

Personally, as an athlete I want SUP to be an olympic sport and I am ready to wait until 2028 if needed. I believe I still could try and make it then. 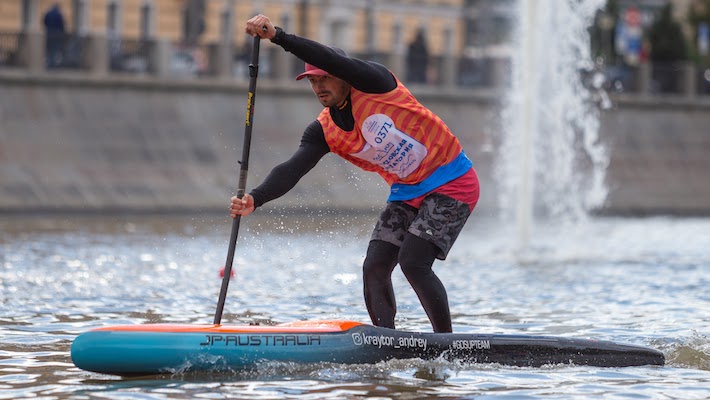 After watching your recent viral 200m sprint video, I understand that you are after Connor Baxter’s 200m sprint record. Tell us about that!

Last year in China, at the after-party, we had a conversation with Connor Baxter and Chris Parker. They asked me jokingly when I would be able beat his record of 46,38 second on the 200m sprints. I replied straight away that I would break this record in 2021 and now I’m on my way to it. Maybe Connor will be faster and set a new record, but I’m thankful to him that we had this conversation and now I have got to work for it! This season I achieved 49 seconds many times during training, so I believe I will keep my promise. It was a simple and fun conversation but with a lot of meaning to me.

The video you saw was taken at the last President Cup, I reached a maximum speed of 19,5km/h but slowed down towards the end and finished in 51 seconds. I am happy that we reached 5,2 million views with this video on Facebook with it.

I just want to say that thanks to legend Larry Cain and PDLMSTR, he put his part in my progression!

When is your next competition?

My next race is tomorrow! I am racing against myself and the numbers on my GPS every day! ahaha
We still don’t have a clear calendar and rules for travels so I take it personally as benefits, I started SUP at 24, unlike the top guys right now, I’m just try to use this time! Hopefully I will be present on the European circuit in May but my main goal is ICF WORLDS and ISA WORLDS 2021 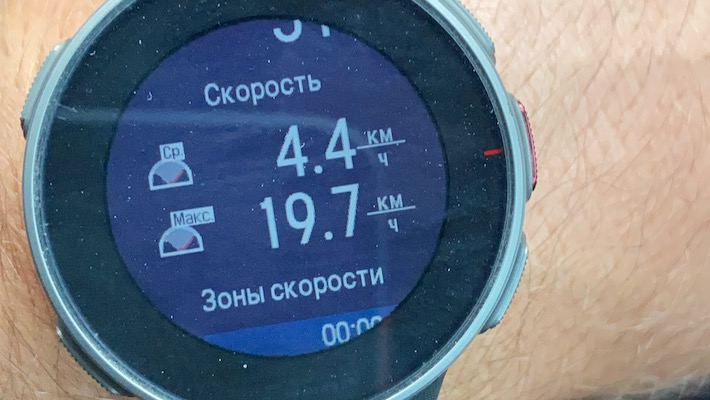 Last question, what’s your secret for a ripped stomach? 🙂 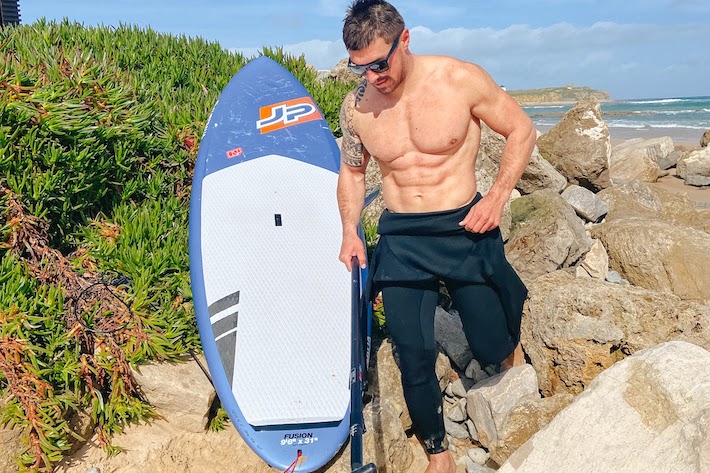 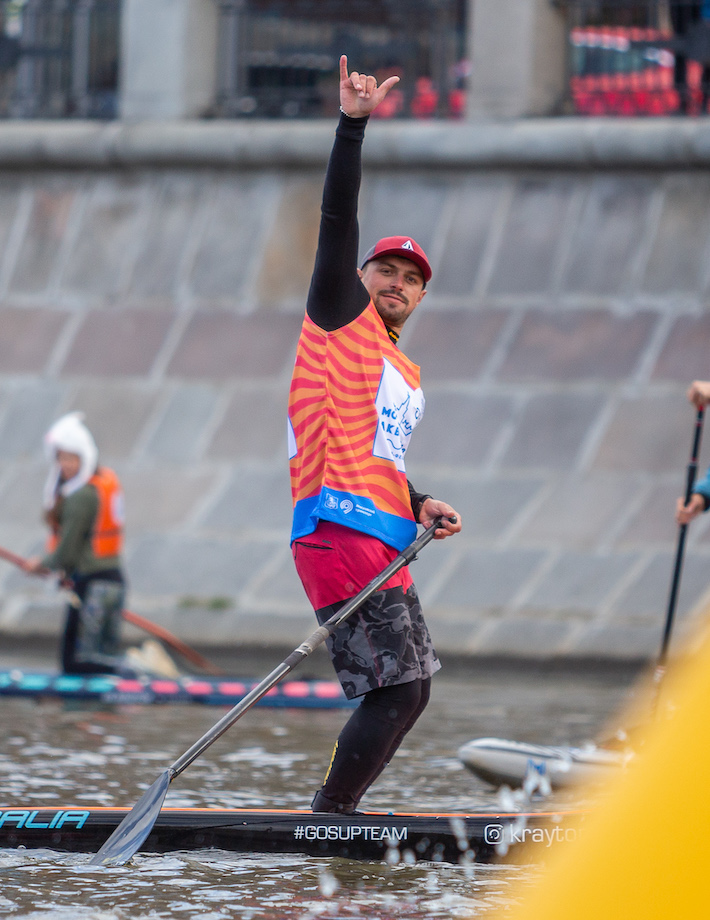